Last Sunday night, just before 9 p.m. ET, my phone exploded with breaking news alerts and private messages on every possible app in both Chinese and English. The predominant headline: media tycoon Jimmy Lai, the publisher of Apple Daily, a Hong Kong tabloid that supports the pro-democracy movement, was arrested by police for "colluding with foreign forces."

It was the highest-profile arrest since the implementation of Hong Kong's new national security law, which democracy advocates feared would be used to suppress criticism of China.

My heart sank as I watched a live feed of police officers marching into the Apple Daily headquarters. My first reaction was to get in touch with one of my closest friends, a senior editor at the newspaper to check if she was OK. She responded instantly, saying she had been stopped and searched at the entrance of the building but was allowed to leave.

"It's sooner than I expected," she said of the police action she and her colleagues had been anticipating. 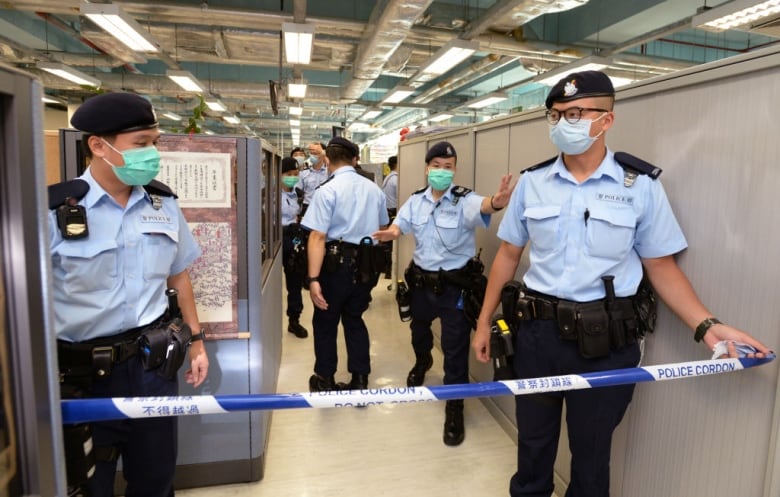 A handout photo from Apple Daily showing police officers during a search of the tabloid's headquarters. Officers led Lai and the company's chief executive, Cheung Kim-hung, through the offices in handcuffs. (Handout/Getty Images)

For those like me who grew up in the former British colony and studied journalism, press freedom was always something we knew would be a luxury once Britain handed sovereignty over Hong Kong back to China in 1997.

Three years later, I was a junior editor for a Chinese-language online publication, and one of the first things I learned was how careful we needed to be in reporting any stories that related to Taiwan, which under Beijing's One China policy was not considered a sovereign state. Any missteps, including using images of the Taiwanese flag in news stories, would get an earful from the bosses.

That was just one of the ways in which self-censorship manifested in Hong Kong media in the early years of Chinese rule. For the most part, life went along as usual for a while as long as you did not step into the red zone. 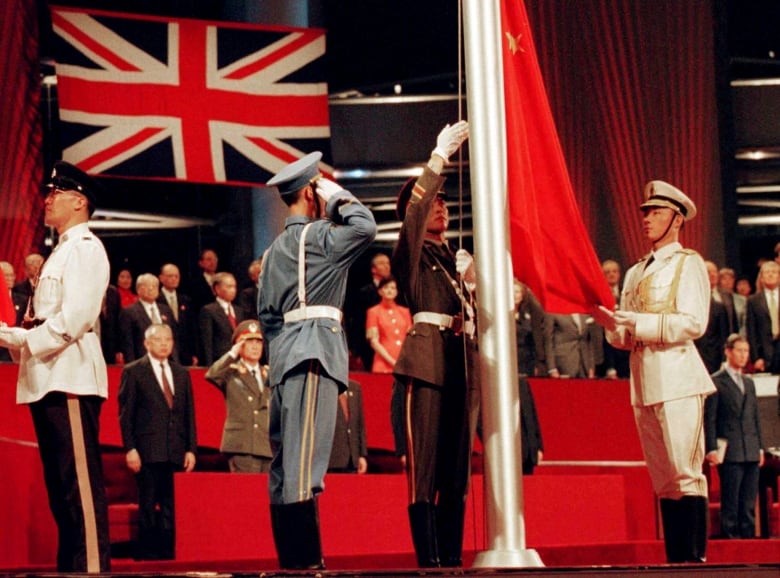 The Chinese flag is raised by People's Liberation Army soldiers to signal Hong Kong's return to Chinese sovereignty after 156 years of British rule July 1, 1997. Under an agreement known as the Basic Law, Hong Kong was to retain some basic rights, such as freedom of speech and assembly as well as an independent judiciary. A condition was also that it would pass its own national security law. (Dylan Martinez/Reuters)

Some local journalists would test the limits of what their employers, most of whom were pro-Beijing, would tolerate by intentionally breaking the rules.

The presence of ex-patriate journalists. who were used to greater editorial independence, also gave local reporters some wiggle room. That was one of the reasons I chose English-language reporting as my major while studying at the Chinese University of Hong Kong — to give myself some more options, just in case.

I went as far as formally becoming a "foreigner" in my hometown and making a declaration to the Immigration Department of Hong Kong to proclaim my Canadian nationality as China does not recognize dual nationality.

In 2002, I decided to come back to Canada, where my parents had immigrated in the 1990s, partly because of my underlying worry of the uncertainty ahead in the news industry as I watched more of my colleagues leave and partly because I got a job offer from a Chinese cable TV station in Toronto. 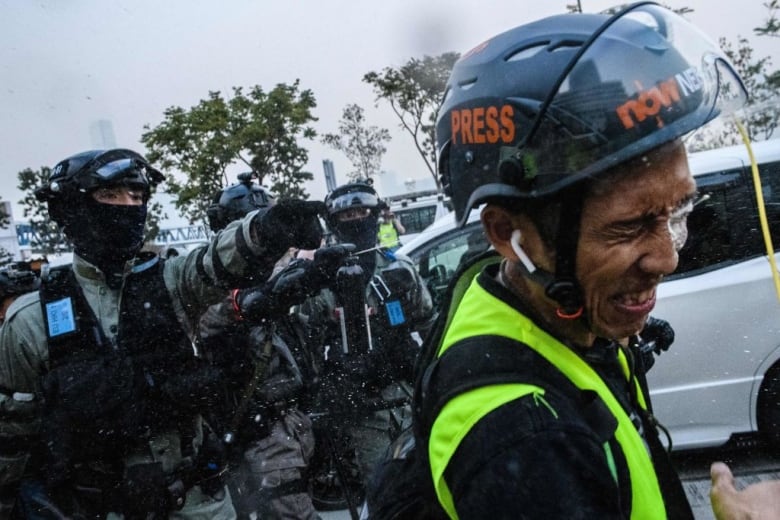 A journalist gets pepper-sprayed after a heated exchange with Hong Kong police during a solidarity rally for China's Uighur minority in December 2019. Hong Kong is a media hub for Asia, but journalists there have felt their freedoms eroding in recent years. (Anthony Wallace/AFP/Getty Images)

Over the years, many of my friends and former colleagues have left the media because of the increasing self-censorship. Roughly less than 10 per cent of my journalism class are working journalists today. And those who stay in the industry know that their days could be numbered.

The relationship between Hong Kong police and the media has been worsening since the pro-democracy movement against China's increasing encroachment on Hong Kong affairs gained steam last summer.

In one of the daily press briefings by police last September, journalists put on gas masks and protective gear to protest the earlier use of pepper spray on them, although the police said they had been just trying to disperse the protesters behind the reporters. 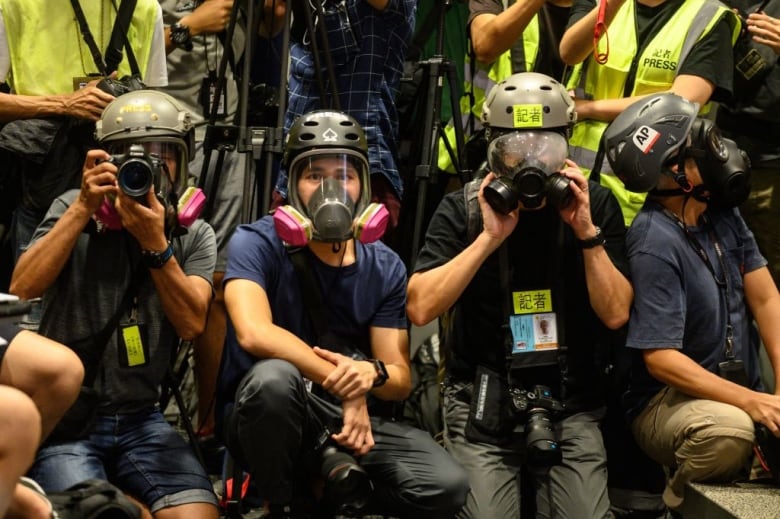 Journalists wear protective gear and high visibility vests during a press conference at police headquarters in Hong Kong on Sept. 9, 2019, to highlight allegations that officers had mistreated and obstructed the media when covering clashes between the police and protesters opposed to the security law. (Philip Fong/AFP/Getty Images)

Despite the growing tensions, some have been holding on to a slim hope that press freedom will still be respected given that Hong Kong is known to be the Asian hub for international press.

Yet that fragile belief has been put to the test and constantly challenged in the past 14 months. Journalists have been injured or obstructed by police while covering the prolonged political unrest in the city.

Foreign or ex-pat journalists have not been immune. During the anti-government protests last year, tense moments between the media and the police were not uncommon. Sky News correspondent Alex Crawford got an angry reaction at a protest last September when she confronted a riot police officer who was questioning another member of the press nearby. 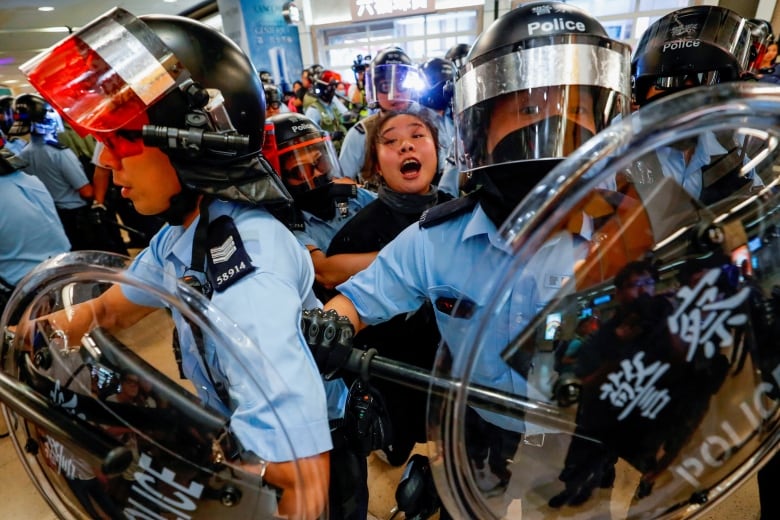 Freelance photographer May James for Hong Kong Free Press, an English-language online publication, was arrested in October and released without charges later.

And there are emerging signs of increasing challenges in getting work visas. Last month, the New York Times announced it would move a third of its staff from Hong Kong to Seoul. The move came after the paper's veteran China correspondent, Chris Buckley, was denied a work permit by Hong Kong authorities.

There have also been rising concerns over visa delays. The Foreign Correspondents' Club in Hong Kong issued an open letter this week to the director of immigration, Au Ka-wang, questioning if "a new procedure may have been established for processing visas for foreign media in Hong Kong."

The same organization also characterized Lai's arrest and the raiding of his paper's offices as "a direct assault on Hong Kong's press freedom"' that signals "a dark new phase."

Hong Kong media tycoon Jimmy Lai has already taken huge risks by having his newspaper openly criticize Beijing, including the new national security law, and he’s been arrested for organizing pro-democracy protests. He tells National co-host Adrienne Arsenault that Hong Kong as it's known to its people and the world is in danger of disappearing.

For journalists who have been living through the erosion of press freedoms in recent years, the images of police officers raiding a newsroom with a pro-democracy stance were simply the final nail in the coffin.

Lai's arrest and the raid at Apple Daily have highlighted the chilling impact of the national security law that could affect the 300,000 Canadians living in the city as well as those of us who are watching closely from afar as the law contains provisions that apply not only to  Hong Kong permanent residents and organizations and companies set up in Hong Kong,, but also to  "a person who is not a permanent resident of the Region" and apply even when an offence is committed outside the city.

Meanwhile, I am just hoping my Canadian passport can provide enough of a safeguard for me to continue reporting news related to my hometown — no matter where I am. 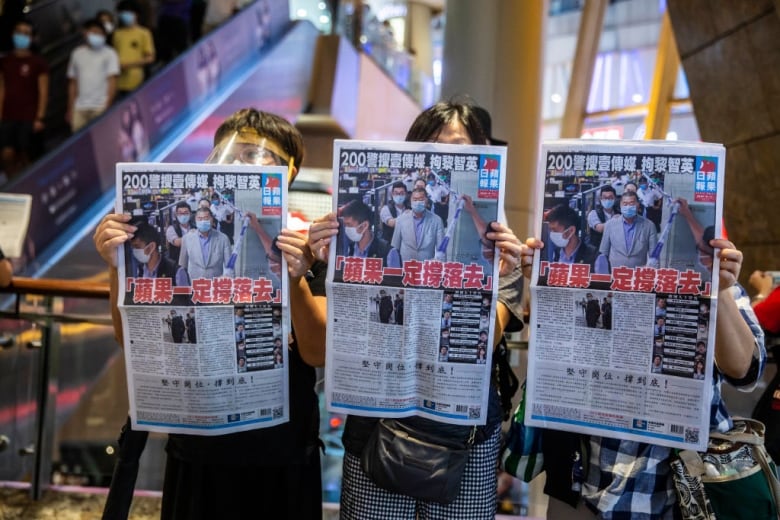 People hold up copies of the Apple Daily as they protest for press freedom inside a mall in Hong Kong Tuesday. (Isaac Lawrence/AFP/Getty Images)

Sporting renamed the Academy in honor of Ronaldo
Suarez will receive 9 million euros a year at Atletico
Liverpool will not buy anyone else in this transfer window
Semedu will move to Wolverhampton for 35 million euros. Contract - until the summer of 2025
Bosnich about Kepa's mistake: I don't think this is the end. He needs a competitor
Rakitic finished his career with the Croatian national team
In the Premier League, the record for goals for the weekend (almost 5 in each match!). And this is yet to be played by Manchester City
Source https://www.cbc.ca/news/opinion/point-of-view-hong-kong-1.5685504?cmp=rss

Painting up a storm this fall

VEZINA: Anti-masker and other COVID-19 claims that don’t add up

Judge agrees to delay US government restrictions on WeChat

Manitoba Premier, Prime Minister to speak ahead of throne speech

CDC shifts guidelines on how coronavirus can spread through the air

Search continues for teen missing off P.E.I., while one body recovered

Italy orders COVID-19 testing on some travelers from France

Bill Kelly: Why there won’t be a fall election

This is what losing an Emmy looks like in 2020

Airbnb suspends 40-plus 'party house' listings across Ontario, including in Ottawa

Bahrain king says accord with Israel not directed against any country

Student at school in Elmira tests positive for coronavirus: board

On the right course

Verdi’s ‘Masked Ball’ in Madrid canceled after jeers over distancing

Airbnb cracks down on party houses in Ontario

Italy right seen ahead in regional vote, but no whitewash -exit poll

Stella’s staff go on strike due to ‘complete lack of respect’ to workers, says union

Italians back cutting number of lawmakers in referendum -exit poll

At 33, this nurse practitioner earning $120,000 a year wants to make a huge life change and move to Europe. But where to start?

Airbnb suspends more than 40 listings across Ontario for hosting parties

Madrid asks for help from Spanish army against coronavirus surge

Trump to push ahead with Supreme Court nomination amid partisan battle

While you were sleeping: Welcome to the first full day of Orange Alert

Pedestrian critically injured after being hit by truck in Scarborough