Cops called him a “ghost.”

A violent, homicidal maniac who viciously sexually assaulted and stabbed 22-year-old career girl Erin Gilmour and 42-year-old single mom of four Susan Tice during a four-month period in 1983. And then, as quickly as he emerged, he faded into the shadows.

On Monday, Toronto Police cold case detectives announced that they finally had a suspect.

Joseph George Sutherland, 61, was arrested Thursday in Moosonee by the OPP and charged with two counts of first-degree murder. He will be transferred south to Toronto in the coming days to face arraignment for the two slayings. 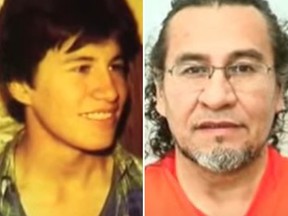 Joseph George Sutherland pictured circa 1980s, left, and present. He is charged with two counts of first-degree murder in Toronto from 1983.

Det. Sgt. Steve Smith — who also cleared the 1984 Christine Jessop murder — said that at the time of the particularly violent killings, Sutherland was living in Toronto.

“And then he moved around Ontario before finally moving to Moosonee, he was a ghost, a nobody,” Smith said. “He was never on our radar. He had no criminal record and frankly, without the technology, finding him would have been like finding a needle in a haystack.”

But the arrest of Sutherland raises more, disturbing questions: Could he be linked to more victims?

According to Smith, detectives will closely examine Sutherland’s movements around the province. They have also reached out to smaller communities in their hunt for similar cold-case murders.

“We’re going to take every possible measure to ensure (the suspect) is not (allegedly) responsible for any other crimes across the province,” the veteran detective said. 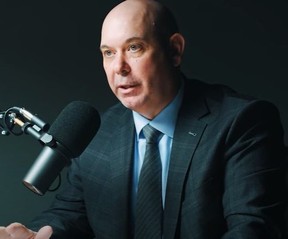 Starting with California’s Golden State Killer, genetic genealogy has been a game changer for cold-case detectives from Texarkana to Toronto. As in the Jessop case, Toronto investigators used the genetic testing company Othram, which built a family tree of the suspect’s nearest relatives.

That led them to Sutherland, who was issued a warrant to provide a DNA sample. The detective noted that the accused seemed to know one day he would receive a knock on his door.

Smith said that IGG eliminates tens of millions of suspects but cautioned it’s “not a magic bullet” and once Othram identifies a family group, investigators begin working backwards.

“And as one genealogist told me, genealogy is like fishing: You never know how long it’s going to take to catch a fish,” Smith said.

With more than 700 unsolved homicides on the books dating back to the 1950s, the cold case chief said that a number of those investigations — particularly ones with a sexual component — can be solved by genetic genealogy.

Smith, Chief James Ramer, Supt. Pauline Gray and others saluted the generations of detectives who doggedly pursued an arrest even after continually running into brick walls.

Their efforts were most profoundly felt by the victims’ families. 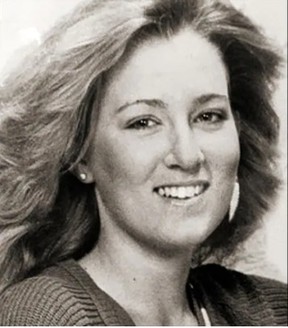 “It’s a full spectrum of emotions,” Gilmour’s brother Shaun McGowan told reporters Monday. “This has affected us our entire lives and brought so many memories of Erin. She was magnetic, full of life … she was aged 22 and had her whole life ahead of her.”

McGowan added that their mother, Anna, died two years ago, never knowing who murdered her only girl.

“But I’m thankful to the incredible detectives, they never gave up trying to solve the case,” he told a press conference. “It speaks to the doggedness of Toronto Police.”

The two disparate slayings were linked in 2000 but after that, cops hit a brick wall. The suspect’s DNA was not in the system. Then came investigative genetic genealogy — and the dominoes fell.

“This is the most complicated case I’ve worked on in my career,” Smith told the Sun in 2021.

“There’s nothing even close to it, the twists and turns we’ve had in this.”

Former Wagner commander: ‘I am sorry for fighting in Ukraine’

Bucks put 5-game win streak on the line against Clippers

Australia to replace Queen Elizabeth’s image on A$5 banknote

B.C. man acquitted of stabbing wife in the back was ‘effectively asleep’: judge

Judo continues to grow in popularity in Saskatchewan

CROUTER: Setting off on an Austrian Alps odyssey in Lech/Zürs

B.C. landlords will now have to pay tenants interest on their damage deposit

Back at Dallas Zoo, found monkeys get fed, snuggle up

West Island community calendar for the week of Feb. 2

COVID hospitalizations in Alberta ebb to levels not seen since July

Biden goes after fees levied for flights, hotels and tickets

Michigan looking for positives as surprising Northwestern up next

Tide begins to turn on shark and ray populations in northwestern Atlantic: study

What the Puck: For Canadiens fans, Suzuki's slump no cause for concern

‘Doppelganger murder’: Woman accused of killing lookalike to fake her own death

Driver charged with impaired driving after collision with dump truck along Highway 400: police

Canada's health care crisis: Who's accountable, and how can we fix an overburdened system?

FATAH: Trudeau’s choice of Hijabi to combat Islamophobia is puzzling