Key takeaways from Day 3 of the impeachment testimony

There were attacks on the credibility of a witness in uniform and hand-wringing by another witness on all that he knows now that he says he didn't know then.

Vice President Mike Pence was name-dropped during testimony, and expressions of concern were made about the July phone call between U.S. President Donald Trump and Ukraine's leader.

The third day of impeachment hearings was the longest yet, bringing to the forefront four witnesses in two separate hearings. All were steeped in national security and foreign affairs.

Here are some takeaways:

'Concerned by the call'

Republicans have consistently criticized the House impeachment inquiry by saying witnesses didn't have firsthand knowledge of Trump's role in trying to persuade Ukraine to investigate a chief political rival.

On Day Three of the proceedings, that posture was more difficult to maintain.

The two witnesses in Tuesday morning's session each listened to the July 25 phone call in which Trump prodded his Ukrainian counterpart to investigate Democratic rival Joe Biden.

Jennifer Williams, an adviser to Vice President Mike Pence, said she considered the call "unusual" since it "involved discussion of what appeared to be a domestic political matter."

Watch Williams talk about the call that concerned her:

U.S. foreign service aide Jennifer Williams testified at the impeachment hearings that she found President Donald Trump's call with Ukraine's new president to be unusual because it appeared to involve domestic politics.

Army Lt.-Col. Alexander Vindman, who arrived for the hearing in military uniform adorned with medals, went even further. He considered it "improper," and, acting out of "duty," reported his alarm to a lawyer for the National Security Council.

"I privately reported my concerns, in official channels, to the proper authorities in the chain of command. My intent was to raise these concerns because they had significant national security implications for our country," Vindman said. "I never thought that I'd be sitting here testifying in front of this committee and the American public about my actions."

For his part, Tim Morrison, who recently left his National Security Council post, said he did not believe that anything illegal occurred on the call but was worried about the political ramifications if the contents leaked.

Republicans levelled early and frequent attacks on Vindman's credibility, even lacing an occasional nicety with a not-so-veiled barb.

Republican Rep. Chris Stewart thanked Vindman, who was wounded by a roadside bomb in Iraq and awarded the Purple Heart, for his service. Yet Stewart also wondered aloud why Vindman felt it necessary to wear his uniform rather than a suit to the hearing.

He wanted to know, too, if Vindman always insisted on being referred to by military rank rather than "Mr." as he did in an exchange earlier with Rep. Devin Nunes, the top Republican on the committee.

The committee attacks on the current NSC official mirrors the combative approach of the White House and other Trump allies, who have repeatedly derided Vindman.

Some Republican attacks struggled to land. After Rep. Jim Jordan suggested that Vindman's peers questioned his judgment, Vindman read aloud from a glowing performance review that called him "brilliant" and "unflappable."

Some attacks even sought to imply that Vindman, a naturalized American citizen who was a toddler when his family fled Ukraine, may have dual loyalties toward the former Soviet Republic.

Under questioning from GOP impeachment counsel Steve Castor, Vindman revealed that he was offered three times the post of Ukraine's defence minister while attending the inauguration of Ukrainian President Volodymyr Zelensky but "immediately dismissed these offers."

He says two American officials witnessed the exchange with a top adviser to Zelensky, and that he notified his chain of command and counterintelligence officials upon returning to the U.S.

Castor questioned whether that created the impression of a conflict, to which Vindman replied, "It's more important what my American chain of command thinks."

There's a lot that Kurt Volker, the former special envoy to Ukraine, contends he didn't know at the time.

He said he didn't know that security aid to Ukraine was linked to the country pursuing investigations.

He said he didn't know that when U.S. officials spoke about investigating Burisma, the Ukraine gas company, that this referred to Biden. He says he should have made that connection much earlier, and had he done so, he would have raised his own objections to it being linked to the aid.

He said he didn't know that then-national security adviser John Bolton had "strong concerns" about discussions of investigations by National Security Council staff.

And he insisted that at no time was he aware of an effort to urge Ukraine to investigate Biden, whom he described as an honourable man.

One detail, though, that he recalled on Tuesday that he did not during his closed-door deposition concerned a pivotal July 10 encounter at the White House involving U.S. and Ukrainian officials.

He initially said there was no discussion that day of investigations, but on Tuesday, recalled that Gordon Sondland, the ambassador to the European Union, made a generic comment about them.

U.S. Vice President Mike Pence has been portrayed largely as out of the loop about Trump's request that Ukraine investigate Biden. The public testimony by Williams refocused attention on what Pence knew about the events that sparked the House impeachment investigation.

Williams, a career foreign service officer who was detailed to Pence's office from the U.S. State Department, compiled briefing materials for Pence on Ukraine. She was in the room when he met with Zelensky in September and was among the staffers in the Situation Room who listened and took notes during the July 25th call.

Katie Waldman, a Pence spokesperson, noted that Williams' appointment began April 1 and said she "she doesn't directly report to the Vice President." 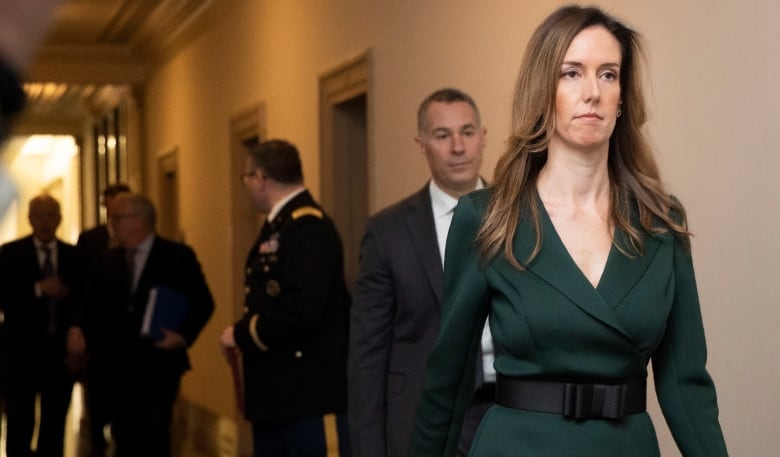 Pence failed to come to Williams' defence when Trump recently tweeted that she should meet with "the other Never Trumpers, who I don't know & mostly never even heard of, & work out a better presidential attack!"

Williams said she was confused by the attack and "would not" consider herself a "Never Trumper."

The White House reacted to the impeachment inquiry in real time Tuesday, stepping up its engagement after facing persistent complaints from Republican allies that it wasn't doing enough to counter allegations against the president.

White House press secretary Stephanie Grisham slammed the first round of interviews Tuesday as further evidence that Democrats are "blinded by their hatred for Donald Trump and rabid desire to overturn the outcome of a free and fair election."

And Trump, speaking during a Cabinet meeting, called the proceedings a "disgrace" and "kangaroo court," while praising Republican lawmakers for "killing it."

After being criticized by outside Trump allies for failing to adequately defend the president, the White House sent a steady stream of "rapid response" emails to reporters beginning before the first witnesses were even sworn-in. The messages sought to defend Trump and undermine the credibility of the witnesses.

"The President of the United States determines American foreign policy — not unelected bureaucrats," said one email, as the White House argued that the career officials testifying had a policy dispute with Trump about Ukraine. "It's the job of bureaucrats to implement that agenda set by the President — not leak and undermine him at every turn."

"Williams' prior testimony offered nothing but personal opinion and conjecture over a call that all Americans can see for themselves was perfectly appropriate," the White House said.

The White House is also attacking Vindman, saying he "has faced accusations of poor judgment, leaking, and going around normal procedures."

Watch Vindman talk about facing the power of the presidency:

Lt.-Col. Alexander Vindman says belief in U.S. values has given him courage to face power of presidency

Trump was criticized by Democrats for his push-back efforts last week, when he tweeted out an attack on another witness, former Ambassador to Ukraine Marie Yovanovitch, as she was speaking.

Money or liberty? No win for carers, cleaners in coronavirus crisis

3D printers forge face shields for fight against the coronavirus

ASK AMY: Mother’s mistakes come back to haunt her

Raiyan Chowdhury on COVID-19: Wearing masks can save lives — public health officials must be clear about this

Your space might be limited; your design vision shouldn’t be

Susan Delacourt: ‘He’s my therapist’: How Chrystia Freeland and Doug Ford forged an unlikely friendship in the fight against COVID-19

COVID-19 has pushed Toronto home sales off a cliff, but they’ll come back strong: realtors

Taiwan talks WHO role with US, China denounces ‘manipulation’

Cruise passengers to land soon and ‘Jesus Christ Superstar’ streamable; In The News for April 3

'Green light to gouge': Prescription changes due to COVID-19 lead to higher costs

'People will make a sacrifice for the common good': How the fight against COVID-19 could extend to climate

'I was made to feel belittled': Nurses reveal fears working on front lines of COVID-19 pandemic

As COVID-19 bailouts pile up, Canadians ask for relief on credit card rates

Why are credit card rates not coming down in the COVID-19 crisis?

Quebecers warming up to Trudeau's handling of COVID-19: polls

Germany: ESM aid should be disbursed without lengthy visits from officials

Kazakhstan to call up reservists to fight coronavirus, unemployment

WNBA players eliminated in NBA 2K League Three For All