Actress Louise Fletcher, who won an Academy Award for her role in the 1975 film “One Flew Over the Cuckoo’s Nest,” has died at 88, the Associated Press reported late Friday.

Fletcher died in her sleep surrounded by family at her home in Montdurausse, France, her agent David Shaul told the news agency, without giving a cause for her death.

Andrew Bick, her son, told The Hollywood Reporter that she died on Friday of natural causes. She had survived two bouts with breast cancer.

Reuters was not immediately able to reach Fletcher’s agent or son for comment. 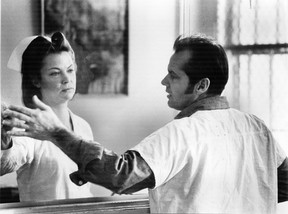 Louise Fletcher and Jack Nicholson are pictured in “One Flew Over The Cuckoo’s Nest.” Photo by supplied /Postmedia Network files

In her acceptance speech that night, she used American Sign Language to thank her deaf parents and thanked audiences for hating her.

Her portrayal of the character in the film was so memorable, streaming platform Netflix made a series called “Ratched” in 2020, which tells the origin story of the nurse-turned-villain.

Born Estelle Louise Fletcher on July 22, 1934, she was the second of four children.

She married producer Jerry Bick in the early 1960s and had two sons, John and Andrew. Fletcher divorced Bick in 1977 and is survived by her sons, according to the Associated Press.

B.C. advocates for migrants happy Ottawa wants to keep families united, but wonder where they will live

Warm weather to return, but a frigid few days ahead for Winnipeg: Environment Canada

Dan Fumano: Push on to light up the Ho Ho's neon chopsticks once again

The best gifts for the home cook in 2022

Oklahoma hopes to return to winning ways against Kansas City

Ex-U.S. lawmaker arrested for conspiring to act as agent of Venezuela

Mexico pledges to complete huge elevated train in one year

As Red Cross heads to CHEO, other Ontario pediatric hospitals not requesting help

Arthur Smith: ‘Every position’ to be evaluated entering Falcons’ bye

B.C. to start public push to get more kids vaccinated against flu as cases climb

Vigil in Guelph for Montreal massacre anniversary to focus on ‘femicide’

‘Unbelievable’: Mama bear and 2 cubs use doggy door to break into B.C. home

John Ivison: Forget the buyback, spend the money on stopping guns from coming over the border