Five men have been welcomed as heroes by the Ontario police after saving a man from a burning car on a highway in the Toronto area earlier this week.

On Monday, OPP responded to a report that a vehicle was burning on a westbound QEW at Cawthra in Missisoga.

A video of the incident tweeted by the OPP on Wednesday night shows a vehicle that appears to bend while the smoke is visible.

The vehicle eventually collided with the ditch and the fire began to intensify.

Police said the five men who saw the incident were pulled and rushed to help the driver escape from the burning car.

A 36-year-old man from Toronto who experienced a medical episode endangered his life when the vehicle started to burn with the driver still inside. Living for the heroic endeavors of men. They opened the driver's door to save the driver. You are my#HERO. '22 July 4,pic.twitter.com/bwE43tMhn1

In the In video, you can hear the man yelling, "Buddy, get out of here."

You can see a man using a hammer to break the driver's side window and release the driver.

Eventually, the man was able to open the door and safely pull the 36-year-old driver out of the car. 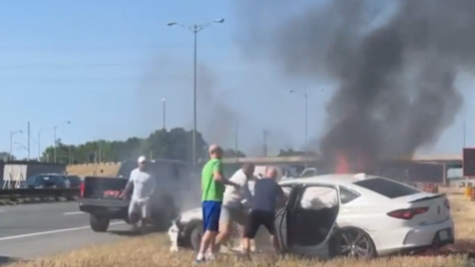 OPP is grateful to the five men who rescued a man from a burning car in the QEW of Missisoga on Monday. (Twitter / @ OPP_HSD)

After a while, the vehicle looks like it's on fire.

OPP thanked the men for their heroic efforts to save the driver.

"A 36-year-old man from Toronto who experienced a medical episode is a hero of five men who endangered his life when the vehicle started to burn with the driver still inside. They are alive thanks to their hard work. They opened the driver's door to save the driver, "OPP tweeted.

The driver was not injured.