A lawyer for Meng Wanzhou accused former U.S. president Donald Trump Wednesday of leaving a "stain" on the Canadian justice system by threatening to intervene in extradition proceedings against the Huawei executive in pursuit of a trade deal.

In a blistering attack that sought to tie Trump's comments on the case to the policies of the current U.S. administration, Richard Peck claimed Meng was the public face of a company that has come to represent a threat to U.S. global technological domination.

On Dec. 11, 2018 — 10 days after Meng's arrest at Vancouver's airport — Trump told a Reuters reporter he would "certainly intervene" in the case if he thought it necessary to reach a trade deal with China.

China and the U.S. were in the middle of an escalating tariff battle.

"These words cast a pall over these proceedings. They reduce Ms. Meng from a human being to a chattel. The notion that a person's liberty can be used in any way to advance a commercial transaction is anathema to our justice system, to this process, to the rule of law," Peck said.

"It's a notion that strikes at the heart of human dignity."

Plan to 'debilitate, if not destroy, Huawei'

Meng, who is Huawei's chief financial officer, is charged with fraud and conspiracy in the United States for allegedly lying to an HSBC executive about Huawei's control of a subsidiary accused of violating U.S. economic sanctions against Iran.

Prosecutors allege the bank relied on Meng's lies in deciding to continue handling financial transactions for Huawei, placing HSBC at risk of losses and prosecution for breaching the same set of sanctions. 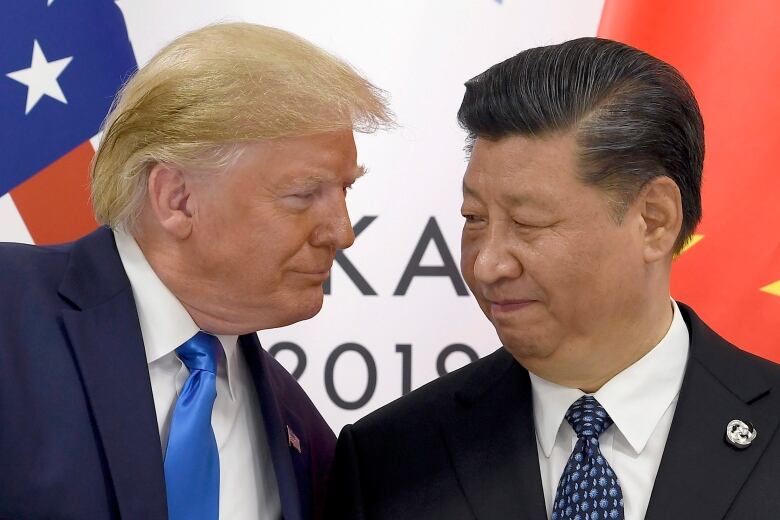 In this file photo from 2019, U.S. President Donald Trump, left, meets with Chinese President Xi Jinping. Meng Wanzhou's lawyers claim Trump threatened to use her as a bargaining chip in a trade war with China. (Susan Walsh/The Associated Press)

The defence wants the judge overseeing the B.C. Supreme Court extradition proceedings to toss the case over what Meng's lawyers claim is an abuse of process.

In making his case, Peck said it was important to understand the context of the U.S. government's focus on China and on Huawei in particular.

He claimed Meng's situation was rooted in "a concerted and continuing effort on the part of the U.S. government to debilitate, if not destroy, Huawei."

'This is not hyperbole on my part'

Peck said the U.S. has not been able to offer real evidence of a link between Huawei and the Chinese government, but clearly sees the telecommunications giant as a threat to the power the U.S. used to hold as a global innovator in technology.

He said Huawei, and by extension China, has "stolen a march" on the United States when it comes to the race to equip the world with the next generation of wireless technology, known as 5G. 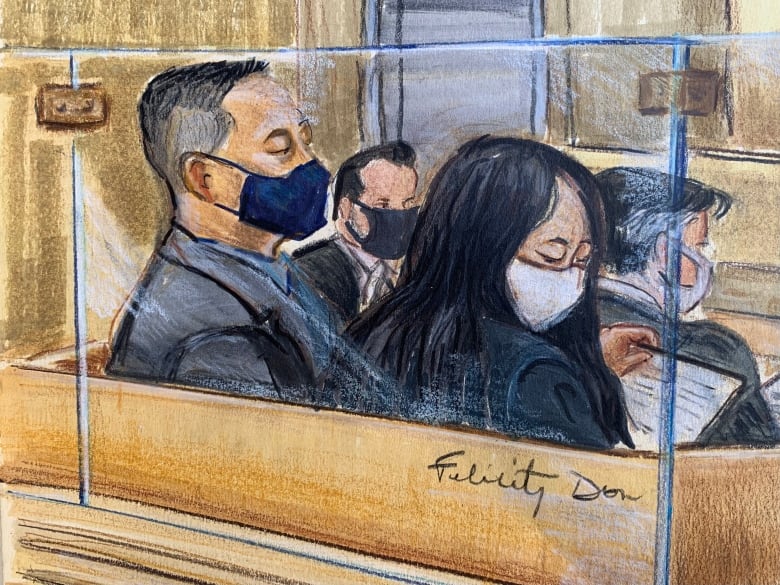 Meng Wanzhou sits beside an interpreter as she listens to her lawyers argue that she is being used as a political pawn. The Huawei executive is facing extradition to the United States. (Felicity Don)

"This specific technology race has been referred to as the 21st century version of the arms race of the Cold War years," Peck told the judge.

"This is not hyperbole on my part. The U.S. sees China and advanced Chinese technological companies — in particular, this company Huawei — as presenting an existential threat."

Peck said Meng's arrest and the ensuing publicity made her the face of the company, which was founded by her billionaire father. And he said Trump's involvement was unique.

"In the annals of extradition law, it appears to be the first time the head of a requesting state has commented directly on the plight of a person sought," Peck said.

'She is not Huawei'

Peck cited a statement Prime Minister Justin Trudeau made in December 2020, in which he claimed to have asked the U.S. to ensure that any trade deal it reaches with China address the situations of Meng and two Canadians detained in China, Michael Kovrig and Michael Spavor.

Kovrig, a former diplomat, and Spavor, an entrepreneur, have been held in Chinese prisons for more than two years. They are accused of spying — though no evidence has been revealed — in what most observers believe is retaliation for Meng's arrest. 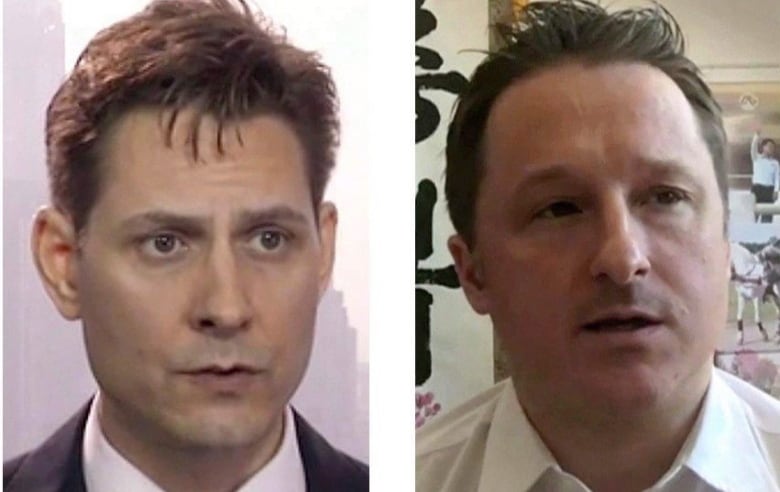 Michael Kovrig, left, and Michael Spavor, right, were detained by China in the wake of charges against Huawei executive Meng Wanzhou, and remain in prison, accused of spying. (The Canadian Press, The Associated Press)

Even as the lawyer spoke in the Vancouver courtroom, Trudeau told a news conference in Ottawa that China concocted the national security charges against Kovrig and Spavor as revenge for Meng.

But she said it was more about the "cloud" under which Meng was having to defend herself.

"She is not Huawei, she is a human being," Duckett said.

"The ordinary person does not make decisions in defence of their extradition knowing that on political and diplomatic levels others are making decisions which may affect their liberty. And here those others are not innocuous individuals, they are superpowers."

'The base of their claim is non-existent,' Crown says

As he began his reply, Crown attorney Robert Frater urged Holmes to reject the defence arguments, which he characterized as "thin."

"That is the crux of their case, and it is not very much at all," Frater told the judge.

"Context matters in this case, it matters a lot," he said.

He read a series of statements made in the past two years by other individuals with authority over the case who said the outcome would depend on the rule of law and that the judicial and political processes would have to remain separate.

He also said Trudeau had always been careful to separate his concern for the safety of Kovrig and Spavor from the workings of the justice system.

"The base of their claim is non-existent," Frater said.

"If context means anything at all, it is that the most relevant actors are saying something somewhat different than the vague statements made by the president."

Frater is expected to conclude his arguments on Thursday. The defence will deliver a reply on Friday.

Juve decided to sell Rabiot and Ramsey. The club wants to sign Chalhanoglu and Locatelli
Neymar on the celebration before Kimmich: I didn't try to provoke him. It's fate. He said that Bayern are already in the semifinals
Neymar, Mbappe and Paredes are PSG's most important players against Bayern Munich. Pochettino took into account the mistakes of the first match
The head of Borussia about City: They spent a billion euros on players in 5 years. Who else would do that? Pep should not criticize other clubs
Referees Howard Webb and Bibiana Steinhaus married
Presnel Kimpembe: PSG have a soul. The club doesn't stop growing. I'm proud
Lothar Mattheus: Bayern think of Nagelsmann as a successor to Flick

UK to respond to EU legal action over N.Ireland by mid-May

Denmark to permanently discontinue use of AstraZeneca vaccine – TV2

NATO forces to leave together from Afghanistan, U.S. says

Kindergartens to reopen, but Poland keeps most coronavirus curbs

Can your employer require you to be vaccinated? It's very likely

NATO forces will leave together from Afghanistan, Blinken says

Clots cause vaccine hurdles; U.S. troops in Afghanistan: In The News for April 14

If a pill could ease your heartbreak, would you take it?

Ontario is adding hundreds of ICU beds. But does it have the resources to support them?

Tennis-Evans eager to get vaccinated ahead of Wimbledon