Metallica will be making a grand return to the stage next year in support of its 12th studio album: 72 Seasons.

Due out in April, the 12-track album is Metallica’s first full length collection of new material since 2016’s Hardwired…To Self-Destruct and will see them launching the two-year M72 World Tour that will take the quartet across Europe, the U.S., Canada, South America and Mexico. The band will play two nights in each city with different set lists for both shows in what the band is dubbing a “No Repeat Weekend.”

To coincide with the news, the band dropped the propulsive first single from the album, Lux Æterna. Other song titles include Crown of Barbed Wire, Sleepwalk My Life Away, You Must Burn! and If Darkness Had a Son. 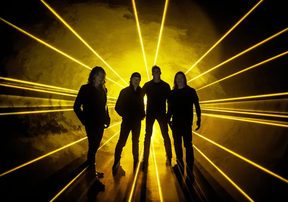 Addressing the concept of the album title, frontman James Hetfield said the songs are inspired by the band’s early life.

“72 seasons. The first 18 years of our lives that form our true or false selves. The concept that we were told ‘who we are’ by our parents. A possible pigeonholing around what kind of personality we are. I think the most interesting part of this is the continued study of those core beliefs and how it affects our perception of the world today,” Hetfield wrote. “Much of our adult experience is reenactment or reaction to these childhood experiences. Prisoners of childhood or breaking free of those bondages we carry.”

The band — which is also comprised of Lars Ulrich, Kirk Hammett and Robert Trujillo — will play in the round “at the 50-yard line” with different opening acts both nights.

While Metallica has continued to tour since the release of Hardwired…To Self-Destruct, the band courted new fans when its 1986 song Master of Puppets appeared in the Season 4 finale of Netflix’s Stranger Things.

“The way The Duffer Brothers have incorporated music into Stranger Things has always been next level, so we were beyond psyched for them to not only include ‘Master of Puppets’ in the show, but to have such a pivotal scene built around it,” the band shard on their Instagram. “We were all stoked to see the final result and when we did we were totally blown away.”

For more ticketing info on the M72 Tour, visit Metallica.com.

More outdoor defibrillator stations needed if lives are to be saved: experts

In 67 minutes of video, brutality followed by nonchalance

MANDEL: Murder victim’s mom says ‘our torture continues’ as Millard and Smich sentences to be reduced

Distrust of police: Black parents, children have ‘the talk’

Kobe Brown powers Missouri in upset over No. 12 Iowa State

Ukraine intensifies effort to bar Russian athletes from Olympics in 2024

As Fredericton creates more housing than ever, affordability is a challenge

No. 16 Marquette seize command late to cruise past DePaul

Thailand from A to Z

GOLDSTEIN: Health care is broken and our governments broke it

Ukraine in talks with allies about getting long-range missiles – aide

Permanent patios go to public debate next month in Vancouver

Winnipeg police car crashes into building after collision on Friday

Whither winter? After record warmth, a cold snap is coming too late for the Ice Dragon Boat Festival races

Outdoor enthusiasts: How to keep active and motivated during Canadian winter

RCMP searching for senior who suffers from dementia in South Okanagan

Gregory Allen Howard, screenwriter behind Remember the Titans, dead at 70

No rockin’ on the river: Merritt, B.C. music festival cancelled

How COVID continues to impact training of surgeons in Canada: ‘Not business as usual’

Man accused in substation vandalism is released from custody

Death at 844 Johnson: 'We both knew this building was going to kill him'

Winter weather advisories in place for Toronto, much of southern Ontario

Germany won't be a 'party to the war' amid tanks exports to Ukraine: Ambassador

Study shows Canadians love to clean what they see, but skip what they do not