Australian scientists found a detached coral reef on the Great Barrier Reef that exceeds the height of the Empire State Building and the Eiffel Tower, the Schmidt Ocean Institute said this week, the first such discovery in over 100 years.

The "blade like" reef is nearly 500 metres tall and 1.5 kilometres wide, said the institute founded by ex-Google boss Eric Schmidt and his wife, Wendy. That's nearly as tall as the CN Tower, whose antenna reaches a height of 553 metres.

The reef lies 40 metres below the ocean surface and about six kilometres from the edge of Great Barrier Reef.

A team of scientists from James Cook University, led by Robin Beaman, were mapping the northern sea floor of the Great Barrier Reef on board the institute's research vessel Falkor, when they found the reef on Oct. 20. "We are surprised and elated by what we have found," said Beaman.

He said it was the first detached reef of that size to be discovered in over 120 years and that it was thriving with a "blizzard of fish" in a healthy ecosystem.

The discovery comes after a study earlier this month found the Great Barrier Reef had lost more than half its coral in the last three decades.

Using the underwater robot known as SuBastian, the scientists filmed their exploration of the new reef, collecting marine samples on the way, which will be archived and placed in the Queensland Museum and the Museum of Tropical Queensland.

"To not only 3D map the reef in detail, but also visually see this discovery with SuBastian is incredible," Beaman added. 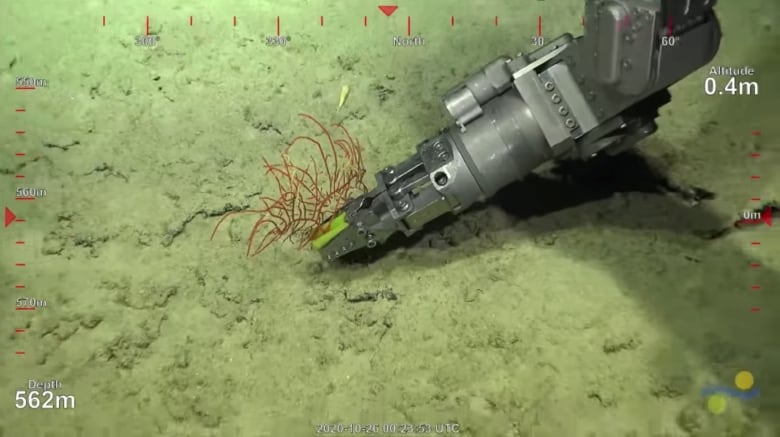 A robotic arm takes a sample from the reef, in this still image taken from video on Oct. 25. (Schmidt Ocean Institute via REUTERS)

Although the northern section of the Great Barrier Reef suffered from bleaching in 2016, Beaman said this detached reef didn't display any evidence of damage.

Bleaching occurs when the water is too warm, forcing coral to expel living algae and causing it to calcify and turn white.

The Great Barrier Reef runs 2,300 km (1,429 miles) down Australia's northeast coast spanning an area half the size of Texas. It was world heritage listed in 1981 by UNESCO as the most extensive and spectacular coral reef ecosystem on the planet.

Van Dijk - best Central defender of 2020, Trent-right, Robertson-left (ESPN)
Massimiliano Allegri: Ronaldo is a top player in terms of mentality. He has a new goal every year
Borussia Dortmund presented a collection with Spongebob as part of a deal with Nickelodeon
Woodward on Manchester United and trophies: there is a lot of work Ahead to achieve the stability needed
Neuer - best goaltender in 2020, Alisson-2nd, Oblak-3rd (ESPN)
Liverpool are Interested in 21-year-old Leipzig defender Konate
Niko Kovac: I'm Waiting for Golovin to return. But it might be better to wait another week or two
Source https://www.cbc.ca/news/technology/coral-reef-1.5781424?cmp=rss

No. 21 Oregon turns back Seton Hall

No. 6 Duke blows out Bellarmine

No. 4 Wisconsin stunned at buzzer by Marquette

After being detained by CBSA at Toronto airport for days, grandfather released without charges

No. 4 Wisconsin stunned by Marquette

Adopt-A-School: Helping kids who may not have food outside of school

This Week in History: 1918 The Province tallies the dreadful casualties of the First World War

Woodbine Racetrack takes it on the chin this year

Vancouver takes over ownership of Balmoral and Regent Hotels

Letters to The Vancouver Sun, Dec. 5, 2020: Thank you, John Mackie, for your wonderful reporting to us from our local times past

Daphne Bramham: Governments need to act with compassion or cities will sink into 'lawless barbarism'

Workplaces are the new hotspot for COVID-19 outbreaks in Ontario

Capital region jobless rate shines in November, but our employment recovery has been weakest

Family of Brittany Meszaros raises money for those fleeing abuse