Nova Scotia's premier says he's asked the federal government for up to 1,000 troops to help with disaster relief in the wake of post-tropical storm Fiona, but so far has only been promised half that amount.

Tim Houston said Monday on CBC's Power & Politics he's grateful for the troops deployed so far, but that more help is needed.

"The damage is extensive — lots of work to do. Many, many hands make light work and certainly there's lots of work to be done," he told host Vassy Kapelos, adding that it would also be a mental relief to communities to see additional help.

About 200 troops were sent to the province — on top of 350 that were already stationed there — to shore up disaster relief efforts, according to a spokesperson from Defence Minister Anita Anand's office.

"We will continue to deploy the right number of personnel to accomplish the tasks … and we will be there for as long as it takes to get these critical tasks done," the spokesperson said in a statement. 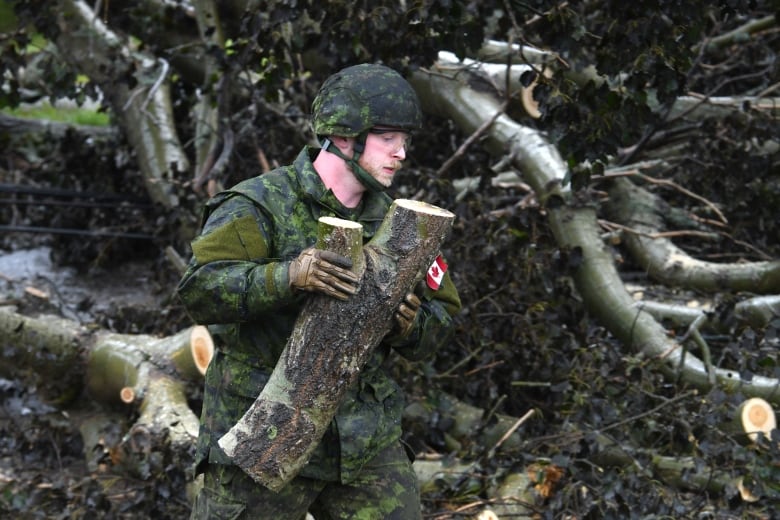 In total 850 troops have been deployed in Nova Scotia, P.E.I. and Newfoundland and Labrador, the spokesperson said.

Houston says more than 20,000 Nova Scotians are still without power and that many won't have their electricity restored until the weekend. He says having additional troops for things like traffic control could free up electrical workers and speed things up.

"These are the types of things that you just need people to do it. So there's lots of need," he said.

Canada's top solider has said he's worried about the Armed Forces' readiness as it faces pressure both from the conflict in Ukraine and the need to respond to natural disasters at home.

"I'm concerned about our ability to respond at scale at [the] speed required," Chief of the Defence Staff Gen. Wayne Eyre said Sunday on Rosemary Barton Live.

WATCH | Pressure on the Forces:

Rosemary Barton Live speaks with Gen. Wayne Eyre, Canada's chief of the defence staff, about the Canadian Armed Forces' efforts in Quebec and Atlantic Canada following post-tropical storm Fiona. Eyre says the domestic demand for the military has been increasing, making him concerned about its 'overall readiness' and ability to 'respond at scale and at speed required.'

Asked whether Canada should create a dedicated disaster relief force, Eyre said the military would always be the "ultimate insurance policy" in case of disaster, but he said that "with the increasing frequency and intensity of natural disasters, there's more capacity that's required."

Members of the military told MPs last week that the Forces were having trouble meeting recruitment goals and were short as many as 10,000 people.

Eyre suggests giving municipal and provincial governments additional resources would allow them to more effectively respond to natural disasters on their own. But even with that, he said he anticipates the military would still be involved in providing relief as disasters become more frequent and severe.

Lions win fourth in five games by romping past Jaguars

In North Carolina, vandals leave thousands in the dark

Soccer-Mane magic is the missing ingredient as Senegal sink

RAPTORS BLOG: Raptors rebounded in first vs. Magic after closed door meeting, will it continue?