By the time St-Pierre Plamondon took the stage at a Boucherville ballroom, results showed the PQ would win only three seats at the National Assembly — seven fewer than in 2018, when the party was handed its worst defeat in nearly 50 years.

But buoyed by winning his own riding of Camille-Laurin, St-Pierre Plamondon delivered a defiant speech focused on the future of the sovereignty movement in Quebec and his ambition to lead the party through a rebuild.

“I feel a great sense of pride,” St-Pierre Plamondon said as PQ supporters waved Quebec flags before him.

“The project of Quebec’s independence, devalued or even scorned for so long by the Liberals and now by the CAQ … this project continues to give hope and to make us dream,” he added. “It’s a project that’s full of light and love, and when I listen to you, I am filled with hope myself.”

In addition to St-Pierre Plamondon winning in Camille-Laurin, the party held onto the Îles-de-la-Madeleine riding, where Joël Arseneau was re-elected, and Matane-Matapédia, where the popular Pascal Bérubé won two thirds of the vote.

The only other PQ incumbent seeking re-election, Méganne Perry Mélançon, lost a tight race in Gaspé. It and all the open former PQ seats were picked up by the CAQ.

“This is a win here tonight (in the riding) that we can and will celebrate,” Bérubé said during an interview that played for the crowd in Boucherville. “There’s obviously a national context too, but tonight isn’t the night for analyzing that.”

At the outset of the campaign, it appeared this election could be a matter of survival for the Parti Québécois.

In 2018, the party suffered its worst setback in nearly 50 years — in part due to the rise of François Legault’s Coalition Avenir Québec — and was pushed to the margins of Quebec’s political landscape.

That election saw the PQ fall from 30 seats at the National Assembly to 10, with then-leader Jean-François Lisée losing his own riding and stepping down as leader before the end of election night.

At the beginning of this year’s election campaign, it was believed the party might fare even worse. Polls had the PQ dead last among the province’s five main parties and suggested it could be reduced to a single seat at the National Assembly.

St-Pierre Plamondon, heading the party since October 2020, faced frequent questions about how it felt to be at the helm of a storied political party on the brink of collapse.

But as the campaign advanced, polls appeared to shift in the PQ’s favour. St-Pierre Plamondon was praised for his strong performances in the campaign’s two televised leaders debates and unflinching defence of sovereignty.

In a Léger-Le Journal-TVA-QUB poll conducted last week, nearly a third of respondents said they believed St-Pierre Plamondon had led the best campaign — top among all leaders. Voting intentions for the party had also climbed from nine to 15 per cent.

Whether St-Pierre Plamondon himself would win his seat in Camille-Laurin was still up in the air heading into election night.

And though the night gave PQ faithful very little to celebrate, it was clear among those on hand that the party’s leader winning his riding would be an acceptable consolation prize.

By the time St-Pierre Plamondon’s win was announced, the quiet crowd in Boucherville erupted for one of the only times of the night.

On stage, St-Pierre Plamondon made sure to address what he said is the need for electoral reform, noting the “distortion” between the PQ receiving 15 per cent of the vote but only winning three seats.

But true to his campaign, the leader remained positive, barely mentioning the party being reduced to three seats.

He ended his speech by quoting former PQ premier Jacques Parizeau and calling on young people to join the party and support its cause.

“Quebec’s destiny is to become a country,” St-Pierre Plamondon said. “And we are the party that will work relentlessly to realize our independence.” 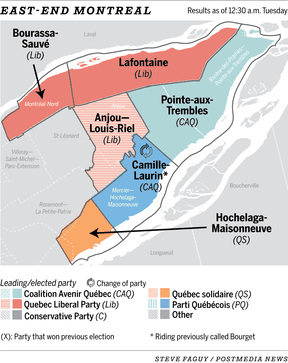 Besides St-Pierre Plamondon winning Camille-Laurin, Montreal’s east end ridings remained the same Monday night as they were before the election.

The Jeanne-Mance—Viger riding, which shares the same borders as the city’s St-Léonard borough, was retained by the Liberals’ Filomena Rotiroti, who’s held the seat since 2018.

The Anjou—Louis-Riel riding, which includes all of Montreal’s Anjou riding and a part of Mercier–Hochelaga-Maisonneuve, was won by the Liberals’ Chantal Gagnon. The riding had been represented by the Liberals’ Lise Thériault since 2001, who did not run in this election.

The Bourassa-Sauvé riding, which includes most of Montréal-Nord, was won by Liberal candidate Madwa-Nika Cadet. The riding has been Liberal since its creation in 2003.

The Liberals also won the Lafontaine riding, which includes most of Montreal’s Rivière-des-Prairies neighbourhood. Marc Tanguay, who has held the seat since 2012, was re-elected.

Soccer-Brazil hope to have Neymar back for last-16 clash, says coach

Voices: Reactions to the LRT report

Military was told to prepare to intervene in ‘Freedom Convoy’ protests: official

3 arrested after break and enter at Peterborough residence: police

Police: Golfer bit off man’s nose in argument over game

Leaf notes: Christmas comes early, but lots of work ahead