Pierre-Luc Dubois not looking back after trade to Winnipeg Jets

Those are the only two things on the mind of Pierre-Luc Dubois after getting his wish on Saturday.

The Columbus Blue Jackets fulfilled his trade request — sending him to the Winnipeg Jets along with a 2022 third-round pick as the Jets gave up forwards Patrik Laine and Jack Roslovic.

Less than a fortnight into the young National Hockey League season, it’s a trade that put the hockey world on notice — and while Dubois has been making headlines, what he’s really wanted is to put his head down and get to work.

“Ever since the start of the season, it’s been up in the air,” Dubois told CJOB’s Kelly Moore in an exclusive interview on Saturday night.

“To now know that I’m going to be joining the Jets is a great feeling where I can just play hockey, and there’s nothing else around it — just trying to help the team win.”

Dubois wouldn’t divulge much information behind his reasoning for asking for a trade from Columbus, which culminated in coach John Tortorella benching the young centre for the entire second and third period of what would be his final game, on Thursday.

“It wasn’t an easy decision to make, and it was something I thought about for a long time.”

His last shift for the Blue Jackets has been criticized by hockey analysts for a lack of effort — and the 22-year-old isn’t turning a blind eye to it.

The trade immediately gives the Jets more depth down the middle, where they already have a franchise cornerstone in Mark Scheifele on the top line.

Despite losing what many believe to be a generational goal-scorer in Patrik Laine, Dubois still thinks the Jets have a full complement of elite wingers — players he’s ready to get the best out of. 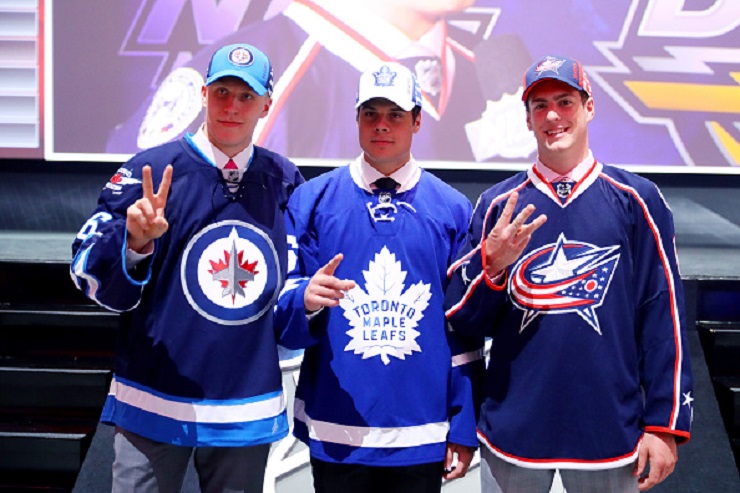 Though he was born in Sainte-Agathe-des-Monts, Que., and grew up in Rimouski, Dubois is no stranger to Winnipeg.

His father, Eric, has served as the defensive coach of the Manitoba Moose, the Jets’ American Hockey League affiliate based in the city, for the past three years.

Dubois says his old man has already given him a glowing review of his new home.

“He’s said nothing but good things about the whole organization — how they treat players, their staff. Everybody knows the Jets are such a good team with a lot of skill and size, so I’m really excited.”

The move “home” doesn’t mean he’s moving back in with mom and dad, though.

“The team has a place (for me), my parents won’t have to take care of me for two weeks,” Dubois laughs. “I also have two dogs, so they’ll be able to have a little backyard and run around.”

If the Jets are indeed as skilled as Dubois believes them to be, it looks like he’ll fit right in.

Pierre-Luc Dubois' Thursday night hat trick for @bluejacketsnhl will go down as a LEGENDARY performance for the club! #StanleyCup pic.twitter.com/x0vyTgA0hH

Dubois’ current jersey number of 18 is held by Bryan Little, who won’t play for the Jets this year as he continues his recovery from a head injury.

His new number has a lot of history in the city — and if there were any questions about the pressure he’s willing to face, his selection should help to answer them.

Dubois understands the reaction from Jets’ fans at losing Laine — the team’s leading goal-scorer since 2016-17.

But he believes his complete style of play will endear himself to those supporters in short order.

“I’m up for the challenge. I’m up to show everybody how I can play hockey,” Dubois says. “I know a lot of people may not have seen me play in the past three years, but I’m excited to get to know the fans, and for the fans to get to know me.”

It’ll be a while before both players are able to hit the ice for their new teams, as they’re both subject to a 14-day quarantine per the NHL’s COVID-19 protocols.

Jets General Manager Kevin Cheveldayoff hopes the federal government will make an exception to that rule and reduce the self-isolation period to a single week — but there’s no word on if that’s going to happen.

If it doesn’t, the earliest the Jets would have the services of Dubois is on Feb. 9, when the team wraps up a four-game set against the Calgary Flames.

It won’t take that long for the team to acclimate their new addition, as Dubois will be able to participate in virtual team meetings.

“I was trying to look at the schedule, try to see when I could start practising and then start playing,” Dubois says. “I’ll definitely be watching the games, doing some video, learn the systems and the special teams.”

“Once I play the first game, I’ll be ready to go physically and mentally.”

Both clubs involved in Saturday’s blockbuster trade were also on the ice just hours later.

The Blue Jackets earned a 5-2 win over the defending Stanley Cup champion, the Tampa Bay Lightning, while the Jets wrapped up a three-game series with the Ottawa Senators by winning their third straight.

You can hear all the action live on 680 CJOB and on CJOB.com — Kelly Moore brings you the Anchor Products Pre-game Show at 6 p.m., while Paul Edmonds and Jaimie Thomas have the call of the game at 8 p.m.

Bernardo Silva on Gladbach's goal: Headbutts are not my thing. I work hard on them
Thibaut Courtois: An away goal means a lot, but the second leg against Atalanta will be different
Giroud and Lewandowski - among the contenders for the title of player of the week in the Champions League
Midfielder Atalanta Pessina about 0:1 with Real Madrid: Well defended, but still missed
Gladbach coach on 0:2 with City: It is difficult to stop an opponent who is in such a form
Pep about Champions League: When I see Bayern like in the match against Lazio, I do not consider Man City the favorite
Morata contracted a cytomegalovirus infection. The Juve striker fainted after the game with Porto
Source https://globalnews.ca/news/7596213/pierre-luc-dubois-winnipeg-jets/

No. 25 Tennessee takes care of business at Vanderbilt

Facebook bans Myanmar military from its platforms with immediate effect

Olympic trials on the horizon for 3 Lethbridge swimmers

U.S. Capitol Police were warned of violence ahead of riot, chief says

Jay Sharrers, hockey pioneer: ‘I wasn’t thinking about being the first Black official’

Olympics-Vaccines ‘encouraged’ but not compulsory for athletes at Tokyo: Coates

A front-line worker became homeless just before the pandemic hit. He's still living in his van

'I don't recognize the person that I am': COVID-19 long hauler hopes new clinic will provide treatment, answers

WILL AND A WAY: Nylander’s pair propels Maple Leafs past Flames

Tennis-Barty party over in Australia amid doubts over top ranking

COVID-19: YVR arrivals may be walking away, opting for fines over mandatory hotel quarantine

About 1,000 Olympics volunteers quit this month in wake of furore over president

NC State wins another on road in upset over No. 15 Virginia

‘Rugrats’ Revival With Original Voice Cast to Debut on Paramount Plus