Prince Philip to be honoured for 'courage, fortitude and faith' at funeral

Prince Philip will be remembered as a man of "courage, fortitude and faith" on Saturday, at a funeral that salutes both his service in the Royal Navy and his support for Queen Elizabeth over three quarters of a century.

Philip, who died April 9 at the age of 99 after 73 years of marriage, will be laid to rest in the Royal Vault at Windsor Castle after a funeral service steeped in military and royal tradition — but also pared down and infused with his own personality.

Coronavirus pandemic restrictions mean that instead of the 800 mourners included in the longstanding plans for his funeral, there will be only 30 inside the castle's St. George's Chapel, including the widowed queen, her four children and her eight grandchildren.

Under spring sunshine, some local residents stopped outside the castle to leave flowers on Saturday morning, but people largely heeded requests by police and the palace not to gather because of the pandemic. 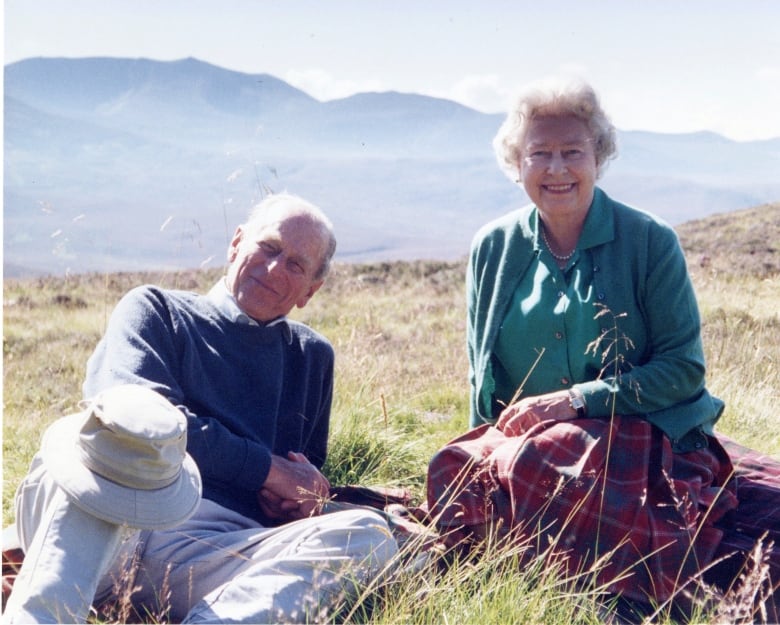 The Queen shared this photo of herself with her husband of 73 years, the Duke of Edinburgh, on Friday evening. The couple are seen in relaxing in Scotland in 2003. (The Countess of Wessex/Buckingham Palace/The Associated Press)

The entire procession and funeral will take place out of public view within the grounds of the castle, a 950-year-old royal residence about 30 kilometres west of London. It will be shown live on television, starting at 9 a.m. ET.

In Ottawa, Prime Minister Justin Trudeau said Canadians' thoughts "continue to be with Her Majesty and the members of the Royal Family as they mourn the loss of a beloved husband, father, grandfather, and great-grandfather."

To honour the life of Prince Philip, Trudeau said a $200,000 donation will be made to the Duke of Edinburgh's International Award.

Ahead of the funeral, Buckingham Palace released a photo of the Queen and Philip, smiling and relaxing on blankets in the grass in the Scottish Highlands in 2003. The palace said the casual, unposed photo was a favourite of the queen. 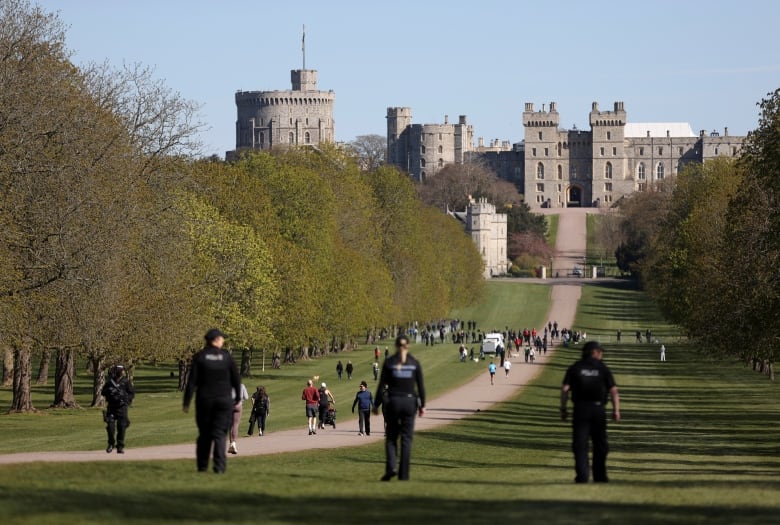 Police walk outside Windsor Castle on the day of the funeral of Prince Philip, husband of Queen Elizabeth, who died at age of 99 on April 9. (Molly Darlington/Reuters)

At 11 a.m., local time, Philip's coffin was moved from the royal family's private chapel to the castle's Inner Hall, where it was due to rest until the funeral procession. The coffin was draped in Philip's personal standard, and topped with his Royal Navy cap and sword and a wreath of flowers.

The funeral will reflect Philip's military ties, both as a ceremonial commander of many units and as a veteran of war. More than 700 military personnel are set to take part, including army bands, Royal Marine buglers and an honour guard drawn from across the armed forces.

Philip was deeply involved in the funeral planning, and aspects of it reflect his personality, including his love of the rugged Land Rover. Philip drove several versions of the four-wheel drive vehicle for decades until he was forced to give up his licence at 97 after a crash. His body will be carried to the chapel on a modified Land Rover Defender that he designed himself. 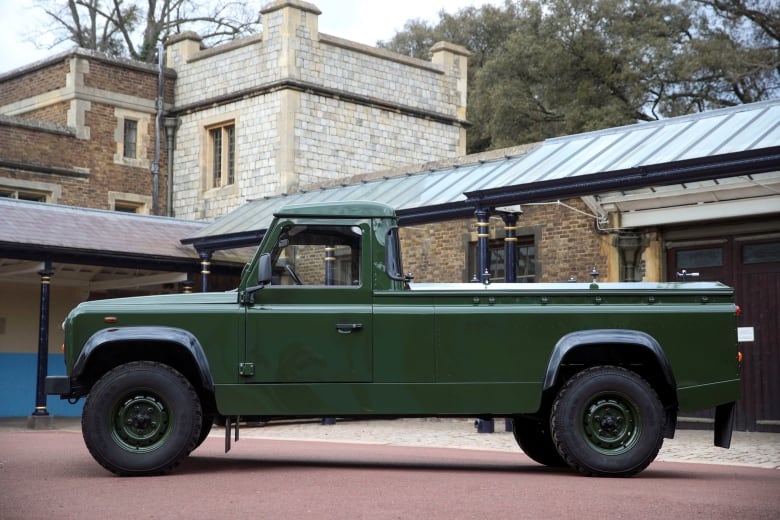 The late Prince Philip helped design the Land Rover that will be used during his funeral proceedings. (Steve Parsons/Pool/Reuters)

The children of Philip and the Queen — Prince Charles, Princess Anne, Prince Andrew and Prince Edward — will walk behind the hearse, while the Queen, 94 will travel to the chapel in a Bentley car.

Grandsons Prince William and Prince Harry will also walk behind the coffin, although not side by side. The brothers, whose relationship has been strained amid Harry's decision to quit royal duties and move to California, will flank their cousin Peter Phillips, the son of Princess Anne.

The moment is likely to stir memories of the image of William and Harry at 15 and 12, walking behind their mother Princess Diana's coffin in 1997, accompanied by their grandfather Philip.

Armed forces bands will play hymns and classical music before the funeral service, which will also be preceded by a nationwide minute of silence.

No sermon or eulogies

Inside the Gothic chapel, the setting for centuries of royal weddings and funerals, the service will be simple and sombre. There will be no sermon, at Philip's request, and no family eulogies or readings, in keeping with royal tradition.

But Dean of Windsor David Conner will say the country has been enriched by Philip's "unwavering loyalty to our Queen, by his service to the nation and the Commonwealth, by his courage, fortitude and faith." 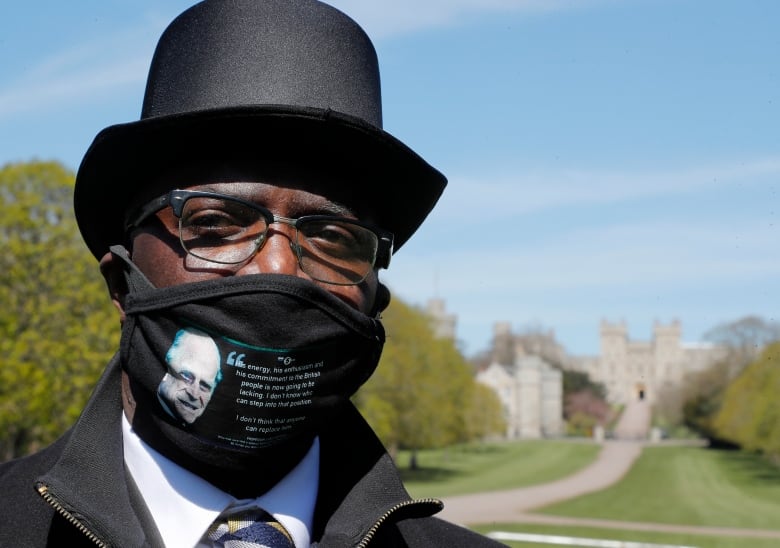 A man wears a face covering with a picture of the Duke of Edinburgh as he walks along the Long Walk in Windsor, England, on Saturday. (Frank Augstein/The Associated Presss)

Philip spent almost 14 years in the Royal Navy and saw action in the Mediterranean, Indian Ocean and Pacific during the Second World War. Several elements of his funeral have a maritime theme, including the hymn Eternal Father, Strong to Save, which is associated with seafarers and asks God: "O hear us when we cry to thee/For those in peril on the sea."

As Philip's coffin is lowered into the Royal Vault, Royal Marine buglers will sound "Action Stations," an alarm that alerts sailors to prepare for battle — a personal request from Philip.

Former Bishop of London Richard Chartres, who knew Philip well, said the prince was a man of faith, but liked things kept succinct.

"He was at home with broad church, high church and low church, but what he really liked was short church," Chartres told the BBC. "I always remember preaching on occasions which he was principal actor that the instruction would always come down: `No more than four minutes."'

Along with Philip's children and grandchildren, the 30 funeral guests include other senior royals and several of his German relatives. Philip was born a prince of Greece and Denmark and, like the queen, is related to a thicket of European royal families.

Mourners have been instructed to wear masks and observe social distancing inside the chapel, and not to join in when a four-person choir sings hymns. The queen, who has spent much of the past year isolating with her husband at Windsor Castle, will sit alone. 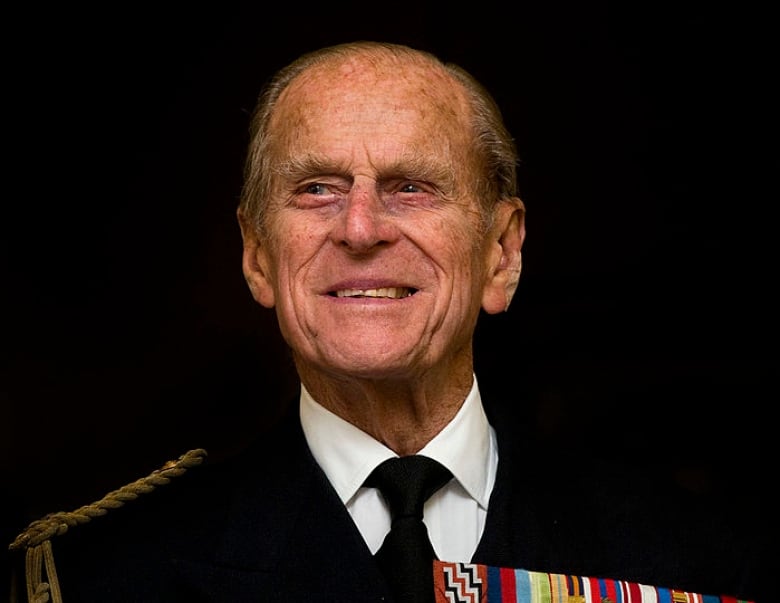 A small service, focused on the Royal Family, will take place at Windsor Castle for Prince Philip, seen here during a visit to the Admiralty Board and Admiralty House on Nov. 23, 2011 in London. (Carl Court/Getty Images)

For decades, Philip was a fixture of British life, renowned for his founding of the Duke of Edinburgh's Awards youth program and for a blunt-spoken manner that at times included downright offensive remarks. He lived in his wife's shadow, but his death has sparked a reflection about his role, and new appreciation from many in Britain.

"He was a character, an absolute character," said Jenny Jeeves as she looked at the floral tributes in Windsor. "He was fun, he was funny. Yes, he made quite a few gaffes, but it depends which way you took it really. Just a wonderful husband, father, and grandfather, and a good example to all of us, really."

CBC News Special: Funeral for Prince Philip begins at 9 a.m. ET on CBC Television and News Network. It will be hosted by The National's Adrienne Arsenault.