Russia says its COVID vaccine is 95% effective. So why is there still Western resistance to it?

When Russia announced this week that its much-hyped COVID-19 vaccine was up to 95 per cent effective, the news was met with a predictable cheer in Russia and uncertainty throughout much of Europe and North America.

"This is great news for Russia and great news for the world," gushed Kirill Dmitriev, head of the Russian Direct Investment Fund, which is pouring countless millions of Russian tax dollars into developing the vaccine it labelled early on as Sputnik V.

Whether the V stands for "five" or simply the letter "V" has never been fully explained, but either way the association is obvious: the original Sputnik satellite won Russia the space race more than 60 years ago, and this new Sputnik will make Russia first in this new race to defeat the pandemic.

With its hyperbolic announcements and an ambitious — some would say unattainable — timetable, the Putin government has attempted to demonstrate the development of Sputnik V has made Russia a vaccine superpower.

Russia says preliminary results for its COVID-19 vaccine, Sputnik V, show a 95 per cent efficacy rate after being tested on more than 18,000 volunteers.

Already, among the reputed "firsts" Russia is claiming: the first COVID vaccine in the world to be registered; the first vaccine anywhere to be announced as part of a national vaccination campaign; and trial results that rank it first in terms of effectiveness.

Not to be outdone, when Pfizer and BioNTech became the first Western vaccine maker to announce promising results, with 90 per cent efficacy, days later Sputnik V's makers said their vaccine was even better — by two percentage points.

Some Western experts have felt opaqueness about the Russian approval process, combined with a rush to get it registered even before trials started, damaged the vaccine's credibility from the outset.

Russia licensed it based on early trials involving only 76 people, whereas usually most approvals come after Phase 3 studies involving tens of thousands of subjects.

Russian officials and state media pundits have decried the skepticism as evidence of an inherent "Western bias" against anything Russian and have accused U.S. and U.K. media of staging a smear campaign to steal away potential international customers.

Fast forward to this week and news from Sputnik's developer, the Gamaleya Research Institute of Epidemiology and Microbiology, of very positive results from a much larger data sample.

Russia's vaccine has 91.4 per cent efficacy from an analysis of more than 18,000 people, said a release on the Sputnik V website. The vaccine's efficacy rose to 95 per cent after 42 days.

Plus, at roughly $20 US per person, Gamalyea says the Russian vaccine is one of the cheapest on the market, making it an attractive option for poorer countries with large populations.

Like the vaccine developed by Oxford University and its partner AstraZeneca, the Russian vaccine uses human adenovirus vectors, or common cold genes, to trigger an immune response in the body. An initial shot is followed by a booster three weeks later. 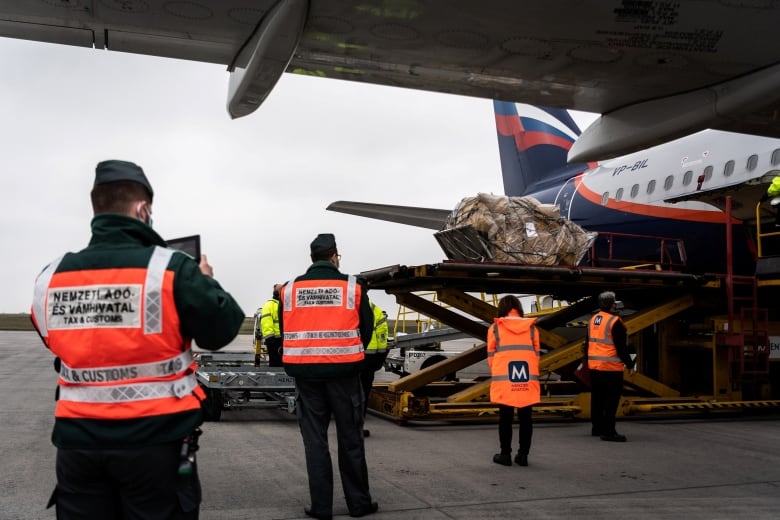 The news about the results prompted a change in tone from many Western vaccine experts.

"The data [is] compatible with the vaccine being reasonably effective," said Stephen Evans, professor of pharmacoepidemiology at the London School of Hygiene and Tropical Medicine.

"These results are consistent with what we see with other vaccines, because the really big message for global health scientists is that this disease [COVID-19] is able to be addressed by vaccines."

Ian Jones, a professor of virology at the University of Reading, concurs.

"I see no reason to doubt it [the results]," Jones told CBC News in an interview.

"I agree that their initial results caused consternation, but I don't think it's because they weren't valid. They were released a bit soon.

"I think it's going to be a useful vaccine." 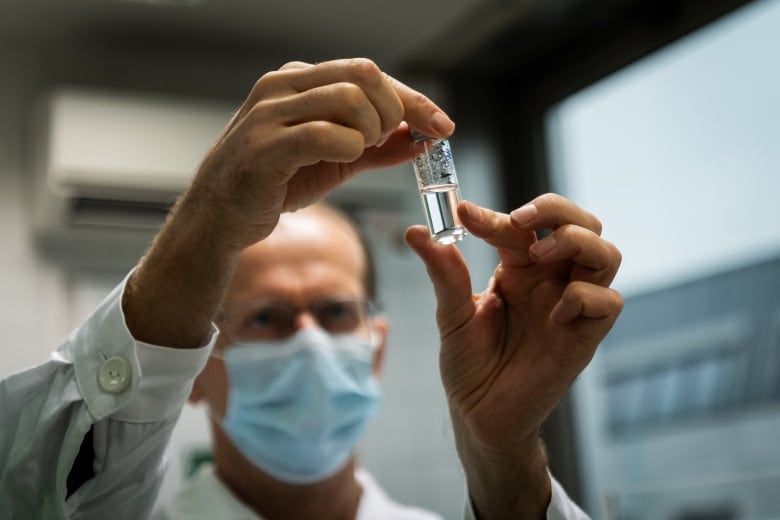 A laboratory assistant holds a tube with Russia's Sputnik-V vaccine at the National Institute of Pharmacy and Nutrition in Budapest on Nov. 19. (Matyas Borsos/Hungarian Foreign Ministry/Reuters)

Their positive assessments are based on the knowledge that the adenovirus delivery method behind the Gamaleya-made vaccine has proven successful over and over again.

What was unclear was whether the COVID-19 virus would be resistant, but Evans says the other drug companies' positive results strongly suggest the Russian vaccine will likely perform well, too.

"We now have four vaccines that have some efficacy [on COVID-19], which is way beyond what we have ever had for an HIV or a malaria vaccine," said Evans.

Ultimately, he says whether a country chooses to buy the Russian-made vaccine comes down to a question of whether they have confidence in the science behind it and trust the regulators who approved it.

The Russian vaccine gets treated more skeptically, said Evans, because the processes in the United States and Europe are far more open and transparent than they are in Russia.

Enrico Bucci, an Italian biologist who was part of the original group of scientists questioning the early Russian results, is among those who continue to believe that the Russian developers have not been sufficiently transparent about their data.

"The sample is too low to claim any percentage of efficacy," Bucci told CBC News.

Furthermore, he said, it's not clear where these 39 people came from, how old they were and whether the results from trials in one country were mixed with those from another location.

The Oxford University/AstraZeneca vaccine — which reported a roughly 70 per cent success rate — has been subjected to similar criticisms about how data from its trials was presented, and its developers have now agreed to run new studies.

So far, Hungary is the only member of the European Union to sign up for the Russian vaccine, although Russian media reports that 50 nations have either already signed deals for the vaccine or are in the process of negotiating them.

On Friday, Russia announced a partnership with Indian pharmaceutical company Hetero to produce 100 million doses of the vaccine by the end of 2021. 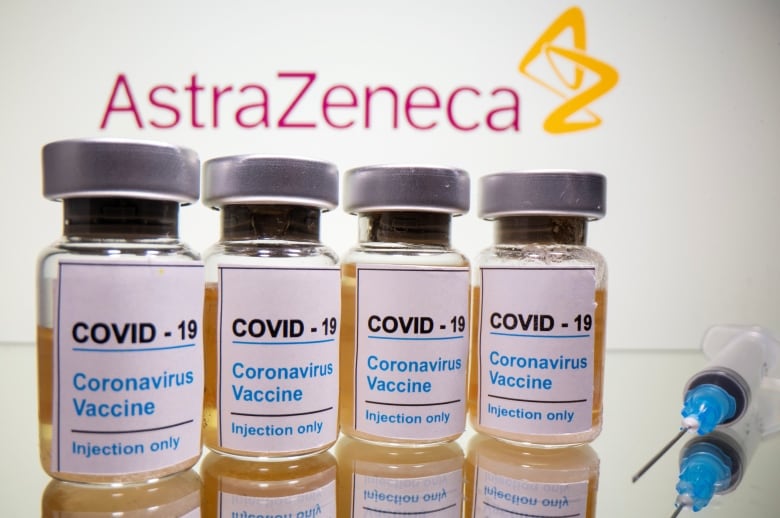 AstraZeneca's vaccine combats the coronavirus in a similar way to the Russian vaccine. (REUTERS)

Canada has announced signed agreements with five vaccine manufacturers, but the list does not include Sputnik V.

Gamalyea's initial estimates that Russia would be able to produce 200 million doses of Sputnik V by the end of next month turned out to be wildly optimistic. The health ministry now says it may be able produce two million doses, at best.

Since the summer,  Russia's Health Ministry has been promising a national vaccination campaign was imminent, but it has been slow to roll out.

President Vladimir Putin said one of his daughters was among the first to get the vaccine, although the Kremlin acknowledged this week that Putin himself has not.

A spokesperson said it would be irresponsible for the head of state to take an "uncertified" vaccine, although the distinction the official was trying to make between a registered vaccine and a certified one was unclear. 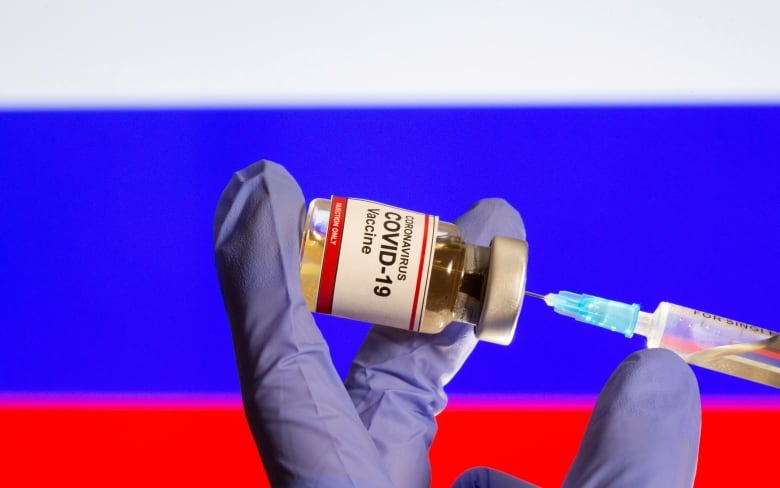 A woman holds a small bottle labelled with a 'Coronavirus COVID-19 Vaccine' sticker and a medical syringe in front of a Russia flag in this illustration taken Oct. 30. (Dado Ruvic/Reuters)

The mayor of Moscow has said authorities plan to set up 300 vaccination centres in the month of December and the plan is to get as many people in the capital inoculated as possible.

Independent public opinion surveys suggest many Russians remain uncertain about the vaccine and whether they will actually take it. In early November, the polling group Levada Centre reported 59 per cent of Russians may refuse to get vaccinated.

On Russian state TV, however, criticism or probing questions about any of the assumptions underlying the government's claims about Sputnik V have largely been absent.

As is standard on TV talk shows, the discussion is framed in geopolitical terms.

Their 60 Minutes program (no relation to the U.S. program of the same name) even cited a CBC News report by The National as purported proof of Western bias, with the host suggesting it was an example of "active propaganda" against Sputnik V.

Abraham Grant: No one has contacted me from Chelsea. I believe that Lampard will do his job
Andrea Pirlo: Thanks to Conte, I wanted to become a coach. There is a lot of respect and sympathy between us
Gian Piero Gasperini: Miranchuk's goal is to find stability. I have to adapt to his characteristics
Rubiales apologized for the lack of a replay of the moment with the check of the game with the hand of the defender Athletic in the match with Real Madrid
Guardiola on the ban on hugs after goals: The reason for this situation in the UK is not in the players, come on
You can also hand over tickets for Euro and return the money (if the matches are postponed in March, everything will burn out). Instructions
Mark Clattenburg: Klopp knows what he's doing, he's incredibly smart. Jurgen is bad at losing, he and Ferguson have more in common than he realizes
Source https://www.cbc.ca/news/world/russia-vaccine-covid-19-coronavirus-chris-brown-1.5819331?cmp=rss

‘LIFE’S TOO SHORT’: Rod Stewart ended feud with Elton John for the sake of his kids

‘CLUSTER OF EMOTIONS’: Vanessa Bryant reflects on grief ahead of one-year anniversary of Kobe and Gianna’s deaths

WYWS: Build enough snowmen to remember what seeing friends is like

COMMENTARY: Trump’s second impeachment is just the beginning to his legal problems

Did your favourite store make the top 2020 retailers list?

Note to readers: Paper delivery delayed due to weather

Voting by mail: crucial in a pandemic. Why is Quebec not ready?

Germany, France and Britain urge Iran to back off latest nuclear move

Cricket-Root urges patience from England bowlers in search of win

So many files, Saskatchewan internet child exploitation unit has to prioritize: Lambie

Bianca Andreescu forced to isolate prior to Australian Open

Weekend weather: It's a winter wonderland; Snowfall warning still in effect for Saturday

China builds hospital in 5 days after surge in virus cases

Canada’s top jobs with the fastest-growing demand in 2021: Randstad

Vaccines and variants: Ways for a better shot at winning the race against time

COMMENTARY: Platform regulation is too important to be left to Americans alone

64% of Canadians in favour of mandatory coronavirus vaccines: poll

Inside the hunt for coronavirus variants in Canada

Today's letters: On travelling – and staying home – during COVID lockdown

‘We are not superhuman’: Health-care workers plead for more mental health support

Soccer-Ozil to end Arsenal contract, move to Fenerbahce – The Athletic

Can Trump pardon himself? Would the courts reject the move?

Shelter: Brothers' condo is in the heart of Quartier des Spectacles

Josh Freed: Montrealers have turned Scandinavian, thanks to COVID-19

Montreal weather: Now we are going to get it

Karl Lohnes: No gym? Small space? That’s no excuse for not exercising

Munk Debate: Is the GOP better off without Trump?

In visit to Central African Republic, French general says situation not same as 2013

'It is frustrating': U.S-educated nurse from Ottawa hits barriers to getting licensed in Ontario