Some concerns about Saskatoon housing project flagged as biased, exclusive

The head of a Saskatoon housing company is calling out the critics to one of its projects for being unwelcoming to low-income and Indigenous families.

Camponi Housing Corporation has proposed a $42.7 million development near the Parkridge neighbourhood, set to house low-income people, with priority given to Métis families.

“(Some) concern stems from not what we are doing, but who we would move in,” said Toby Esterby, executive director of the Métis-led company.

“I am firm in my belief that those questions are not worthy of an answer.”

With 164 walk-up units (407 bedrooms) and retail, office and community space, Esterby said the goal is to create a mini neighbourhood.

The rezoning application for the affordable housing project on Hart Road will go before city council on Monday evening. Several residents emailed council to express their opposition to the proposal prior to the public hearing.

“This is going to decrease the values on homes significantly… and bring in more crime into our neighbourhood,” reads an email from nearby resident Ashley Green, who declined an interview request.

“If this happens I will be putting my house up for sale and moving. Low income needs to be divided up throughout the city.” 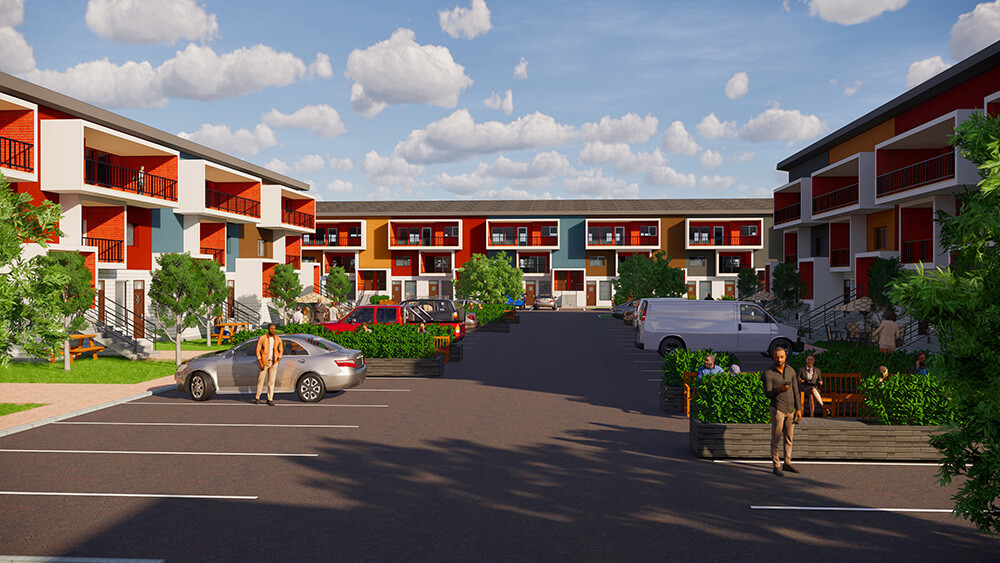 Another email flagged an influx of children to the neighbourhood as a security concern.

“That many children in a small area is going to lead to increased vandalism and other illegal activities,” the email from resident Timothy Martin reads.

Laura Hicks, who has owned a condo near the Blairmore development area for six years, said the idea that crime would increase once more Indigenous, low-income people move into the neighbourhood is based on harmful stereotypes.

“The reasons why people don’t want (the Hart Road project), to me, are based on racial stereotypes and biases,” Hicks said in an interview.

“(It’s) about giving those families a place to call home that they can truly be proud of,” he told Global News.

“It’s time to welcome neighbours in and lift them up.”

“This development is way (too) dense for this area and the increase in population is unsustainable,” Martin wrote, flagging potential oversaturation of local amenities.

Esterby said questions about density and traffic are valid.

Read more: Hundreds of thousands on waitlist for affordable housing in Canada: study

With about 70 wheelchair-accessible units, he said many residents will be seniors, who tend to have a “low community impact.”

Traffic flow and parking won’t be an issue, he said, as most affordable housing tenants don’t own vehicles. He also noted most amenities — including grocery stores, banks and schools — are within walking distance.

Resident Dee Kirchmeier wrote to council saying they first heard about the project on Sept. 21.

Esterby said accusations about a lack of consultation are unfair.

Camponi sent out notices, shared information online and set up a temporary office space near the development site to engage in conversations with community members. About 75 people have visited the office since the beginning of August, he said.

Hicks said there’s no reason why any of her neighbours should be surprised by the project.

“If you didn’t know that this was happening… to be honest, you weren’t paying attention,” she said.

The development is in the ward of Coun. Ann Iwanchuk, who said she has heard from nearly 50 residents concerned about the city’s engagement process.

“The portion of the consultation process I am concerned about is not with respect to Camponi’s consultation,” she said in an email to Global News.

“It is with the city’s public meeting which took place through a virtual meeting, was not adequately advertised in my opinion, and did not provide for a dialogue during the meeting.”

Iwanchuk said she supports the project, but will push for more public consultation, and to vote on the proposal at the next council meeting.

Jurgen Klopp: first Oliver didn't see the moment, then VAR forgot the rules. And the consequences came only for van Dijk and Tiago
Favre on the defeat against Lazio: Dortmund lacked determination. We needed to play an outstanding game, and we didn't
Lampard on 0:0 with Sevilla: I think both teams are happy with the draw
Tuchel Pro 1:2 with Manchester United: PSG were not on the pitch in the first half. One of the worst games of the team
Ole Gunnar Solskjaer: When you go to a team with Neymar and Mbappe, you need to defend well, and the goalkeeper must help out
Barcelona have extended their contracts with Pique, Ter Stegen, Langle and de Jong
Ronald Koeman: Red Pique is too harsh a punishment. But Barcelona played well in the minority
Source https://globalnews.ca/news/7365303/camponi-blairmore-parkridge-affordable-housing-project-rezoning-concerns/

Stu on Sports: When might we see the Canadiens in action again?

Source for 2016 ‘dossier’ on Trump denies being Russian agent

Allison Hanes: Who should appoint the EMSB's next director general?

SNL's take on Quebec was one big yawn for some here

Where They Stand: The Parties on Supports for People with Intellectual Disabilities

Egan: A cop acquitted, a verdict silent on racism. Where are we now?

Company on 'grey list' has taken over Montreal's recycling operations

Billie Eilish Reveals Details of ‘Where Do We Go?’ Livestream Concert This Weekend

Hospital beds versus staff: Is COVID-19 overwhelming the human side of Alberta’s health system?

Harry and Meghan decry ‘crisis of hate’ in social media

LILLEY: Ford and those at the top not feeling the pain they inflict

GUNTER: The Liberals appear desperate to keep the truth from coming out

Nearly 800,000 votes are already cast. But B.C. may still not have a winner on election night

Woman critically injured in crash on Highway 28 north of Gibbons

Letters to the editor: ‘Canada is his monument’

Andrew Wilkinson and other defendants get defamation lawsuit dismissed

Guinean President Conde ahead of rivals in election

Meet the candidates running in the Nipawin election

Mothers taking on ‘shocking’ number of hours caring for children during pandemic: study

‘EVERYONE HAS AN OPINION’: Tory lashes out at Sun Halloween editorial

Medically assisted deaths in Canada could increase by 1,200 next year if proposed changes enacted: report

Tennessee looks to rebound against No. 2 Alabama

Editorial: Montsion's acquittal isn't about bias; it's about how police are trained to act