Trudeau to give update on COVID-19 contact tracing app

Prime Minister Justin Trudeau is expected to give an update this morning on the progress his government has made in the past few weeks on endorsing a contact tracing app to help clamp down on novel coronavirus outbreaks.

Public health officials have been championing the practice of tracking people who may have come in contact with an infected person in order to get them tested and isolated, and the step is widely viewed as vital to a country's pandemic recovery.

While most provinces are doing that laborious work with volunteers, conversations and negotiations have continued with technology companies for weeks about the development of smartphone apps to speed up the effort.

Last month, Trudeau said the government is hoping to publicly endorse one app to encourage its use across the country.

A spokesperson from the Prime Minister's Office said Trudeau will give an update on that work during his 11 a.m. briefing outside of Rideau Cottage.

Apple and Google have teamed up in a rare software collaboration that notifies people automatically if they may have been exposed to the coronavirus. It uses Bluetooth wireless technology to detect when someone who downloaded the app has spent time near another app user who later tested positive for the virus.

The tech giants are providing the software, but public health agencies around the world will have to develop their own contact tracing apps. In an attempt to promote app use and avoid a patchwork of apps, Apple and Google are restricting use of their technology to one app per country — leaving some room for exceptions.

Alberta has been using its own app, called ABTraceTogether, for weeks now. That has some people worrying about a mishmash of apps across the country that could lead to confusing messaging, low uptake numbers and inconsistent data.

Today's announcement will likely also receive scrutiny from privacy advocates, who have raised concerns about how much data these emerging technologies collect and how that information is stored.

The federal, provincial and territorial privacy commissioners issued a joint statement in May, meant to act as guiding principles before adopting any kind of technology to track Canadians. 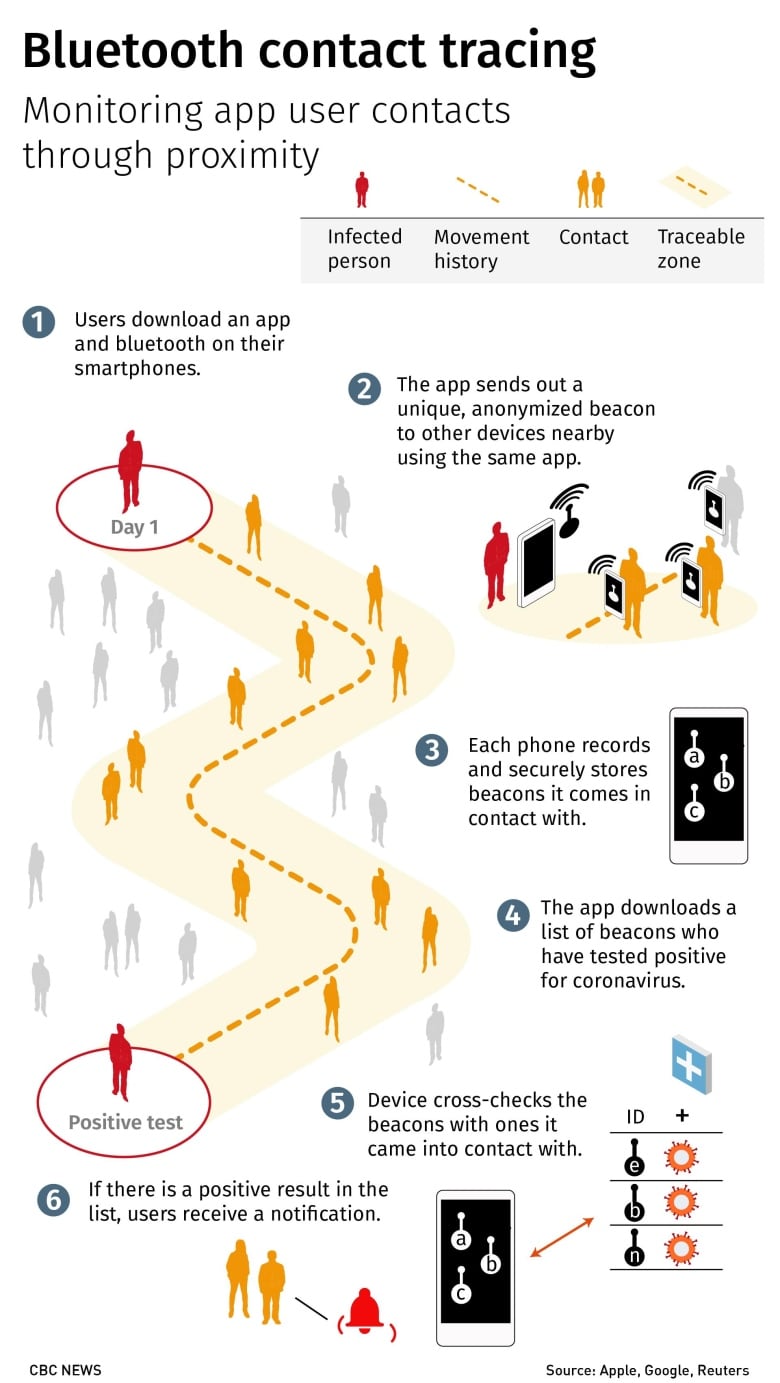 Ronaldo has scored 29 (24+5) points in 26 Serie A matches this season
Dybala scored in 5 consecutive Serie A matches
Vardy scored his 100th Premier League goal for Leicester
Rashford, Greenwood and martial have scored 55 goals for the season and surpassed mane, Salah and Firmino (51 goals)
Martial scored 20 goals in a season for the first time in his career
Rashford is the first English Manchester United player in 8 years with 20+ goals in one season
Manchester United have scored 17 penalties in all competitions this season, 12 in the Premier League
Source https://www.cbc.ca/news/politics/contact-tracing-app-1.5617121?cmp=rss

Lawyers offer free advice to victims of racism and exclusion

‘You have to show up:’ NDP MP questions virtual attendance of Alberta Tories to COVID meetings

Summer movie season pins hopes on August, but will people come back?

Karl Lohnes: Safety first around the pool, but make style a close second

Prayers for the dead as Myanmar’s young jade miners mourned

‘You have to show up:’ NDP MP questions virtual attendance of Alberta Tories

As much of U.S. dials back on July 4, Trump goes big

An overnight stay the COVID way

Motor racing-F1 drivers to show support for fight against racism

Josh Freed: National celebrations muted in the age of COVID-19

Coronavirus: What you need to know as Saskatchewan moves to final stage of Phase 4

While most businesses suffer, the pandemic has only increased the frightening dominance of Facebook, Apple, Google and other giants

G4 swine flu not a new virus, does not infect humans easily: China

How your sewage could help track coronavirus in your neighbourhood

Possible drowning after boy, 14, jumps off Prince of Wales Bridge

2 women hit by car on Seattle highway closed amid protests

Coronavirus: Spain locks down county of 200,000 people over COVID-19 outbreaks

Weather: What you see is what you get with sun, continuing high temperatures

2 women hit by car on Seattle highway amid protests: police

Students are taking a gap year because of COVID-19: ‘It won’t be a normal first year’