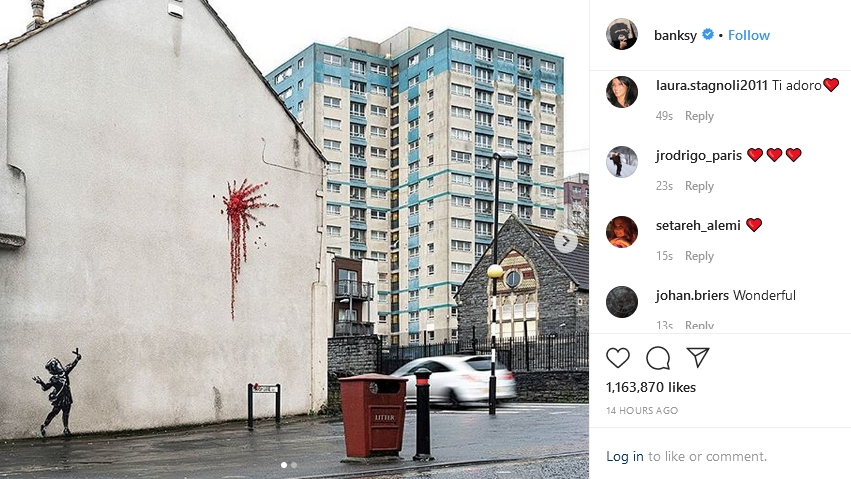 TORONTO -- Just in time for Valentine’s Day, renowned graffiti artist Banksy has owned up to a piece of artwork depicting a girl firing red flowers from a slingshot that mysteriously appeared on the side of a building in England Thursday morning.

The artwork features a spray-painted stencil of a young girl firing a slingshot of red flower petals at the wall of a house on Marsh Lane in Bristol’s Barton Hill neighbourhood.

The unexpected piece was first noticed by passersby on Thursday morning.

On Twitter, the Bristol Somali Community Association said they woke up to “remarkable mural art painted on one of the houses” in the area.

“We hope it’s Banksy’s work,” the group wrote in the post.

The association’s hopes were confirmed at midnight on Valentine’s Day when two photos of the artwork were shared on Banksy’s official Instagram account with no other caption.

According to local media, the artwork was painted on a rental home owned by a man named Edwin Simons. His daughter, Kelly Woodruff, spoke to The Guardian about the piece after learning about it on Facebook.

“We’ve been down here all day and it’s just been a complete buzz of excitement,” she said. “They’re naming it the Valentine’s Banksy. It’s incredible and beautiful.”

The family is hoping to preserve the piece by putting glass over it, Woodruff said.

Today in Barton Hill, we woke up with this remarkable mural art painted on one of the houses of the area.

Come and have a look yourself. Whoever painted, it’s worth admiring their creativity.

BONOKOSKI: PM talks ‘rule of law’ while blockade protesters give it the finger

TRAIK-EOTOMY: Goalie battle could be brewing in Maple Leafs net

Bausch Health shares drop on US$1.52 billion Q4 loss due to lawsuit settlement

Huawei lawsuit over government contracts thrown out by U.S. judge

Woman plays violin during brain surgery to save her musical skills

Expensive Rage Against the Machine tickets are for charity, says guitarist Tom Morello

Colby Cosh: For once, the House of Commons presents us an explicit contest of political philosophies

‘Philly Jesus’ thrown out of church for trespassing during mass

Terra Willy is Lost in Space minus the terror

One coronavirus patient in B.C. has recovered, no new cases

First case of COVID-19 in B.C. is well, three others recovering: health officer

Herd of 15 bison on the lam in Hythe, Alberta after escaping trailer

Digitized Call of the Wild a little too tame

Protesters block St-Lambert tracks 'in solidarity with the Wet'suwet'en'