The Vancouver Pen Shop has remained in the same Downtown Vancouver space for 36 years, surviving the texting trend of the past two decades and three years of COVID-19.

But now it’s time to up stakes as the neighbourhood changes, crime rises and its landlord renovates the building.

And with it will go the quirky window displays that longtime employee Fernie Andrews has been creating for close to 20 years, beginning when founder Margaret Leveque still owned the shop and “let me start doing the weird windows.”

The shop that sells everything from affordable pencils to luxury fountain pens worth hundreds-of-dollars closed its doors on Nov. 18 at 512 W. Hastings St. and has reopened this week in a space closer to Holt Renfrew and Nordstrom.

Andrews will create one last Christmas window display in the old, empty shop for nostalgia’s sake and it will remain there until January, when the lease expires.

The new space is larger but isn’t configured for a window display as the Hastings’ shop is.

“I am going to miss it,” said Andrews, who would change the window display every two or three months. “It’s really sad.”

Some were pen-themed, with oversized fountain pens and products provided by manufacturers to promote a new line, but others were whimsical, based on a concept that Andrews would think about before creating the windows with dresses bought at a thrift shop or a bolt of fabric or other items purchased at a stationery story with a “shoestring budget” of $100 tops.

She doesn’t really spend a lot of time planning or plotting the design, said Andrews, who has no formal arts education: “I like visual arts. It’s all organic, it’s how I roll.”

“She’s a gifted lady,” said co-worker Shannon Gray, who has worked at the shop for 27 years. When she’s creating “you can’t ask her or you can’t watch, you can’t make suggestions. Sometimes a new employee will say, ‘Can I suggest? … ‘ Don’t.” 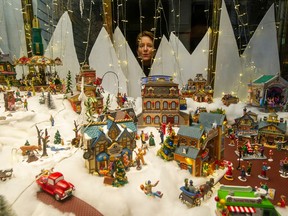 She steered away from the traditional take on a season or holiday and some were based on a literary theme, like when she hung a window full of handmade and written thought bubbles with famous persons’ quotes about writing. And another, based on a comment from a customer that after trying a new pen commented it was “love at first write.” She invited customers to email her photos of them using their favourite pen and built a window around that.

Another had a mannequin with its head thrown back, wearing a black dress with a bolt of bright green fabric standing in front of a spray of vintage pens on a desk next to a large bottle of glue. The pens were too much temptation for a passerby who smashed the window, leaving a spiderweb break in the window.

“It framed the mannequin, which kind of added to the design,” joked Andrews.

In one case, there was a shortage of product and she created a display with several bears and signs indicating the shelves were bare and they barely had enough product.

“Someone who worked at Holt Renfrew slipped a business card under the door and complimented me on it,” she said.

One of her favourites was a messy student’s desk in a chaotic kid’s-room setting: “You could showcase a whole lot of product and I just wanted to give people a visual explosion.”

Every Christmas she would create a snowy village scene populated by mechanized figures donated by owner Margot McRae’s friend who owned a Crash Crawly’s kids’ restaurant, and others Andrews purchased over the years.

Each Christmas, the display changes and not all the figures actually move anymore, but Andrews continues to get joy and give joy out of her creations, judging by the comments from those who return to see it each year and bring their children.

“It was nice to keep this going after Woodward’s closed down,” she said, referring to the former department store’s famous Christmas window display. 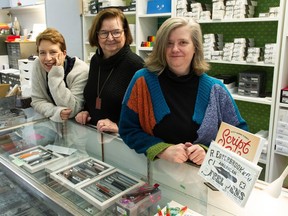 McRae, who took over the shop in 2009 after Leveque died after working there since it opened, said they would have stayed but for the renovations, however the rising crime since COVID from shoplifters who “came in with a shopping list” had its challenges. To deter the thieves and control capacity, customers have to wait to be let into the store by an employee.

She said the window was broken three times in a year and the increased street disorder deterred tourists and walk-ins.

Gray said they had no community left because all the other independents are gone, like Sikora’s Records, and the Vinyl and the Umbrella shops, while the new location in the 500-block of Howe Street has a more retail vitality.

McRae is happy to have Andrews continue the window tradition in the new shop and Andrews said she will see what’s possible after they settle in.

“One of the first things people ask is what about your window?” said McRae.

“I’ll probably do something, but it’s not going to be like this,” said Andrews.

Woman, 84, dies after car hit by train in Saint-Bruno-de-Montarville

Pellerin: Ottawa police prepare for the last protest, not the next one

Selling a home? How to know if you qualify for a capital gains exemption

Interviewing a narco hitman: my journey into Mexico's cartel heartland

Nova Scotia physiotherapists advocating to be in emergency rooms

Online system to seek asylum in US is quickly overwhelmed

Editorial: Were there positive lessons from the convoy protest? Well, yes

Challenge for Tunisian democracy: Getting voters to show up

Montreal weather: Flurries for now, but more is on the way

Raymond J. de Souza: Could drug-addled Harry’s tome be the most boring book of the year?

Rent control: What tenants should know as rental prices surge across Canada

Jacket found in U.K. may have origins with Indigenous Manitobans 170 years ago

Timothy Ash: The West shouldn’t worry about what would happen if Russia is defeated in Ukraine

High in the saddle in the Sonoran Desert

The U.S. says the Wagner Group is a transnational criminal organization. Here's why

After 5-year hiatus, the Arctic Winter Games return this weekend

Villanova faces No. 23 Providence, looks to move above .500

‘He’s close to us’: Wheelchair users in Africa await pope

Kings kick off long road trip with two at Minnesota

Flames bust out in first period to handle Kraken, 5-2

How to fix a howitzer: US offers help line to Ukraine troops

Trump kicks off 2024 bid with events in early voting states

Necas shines as Hurricanes win thriller in OT over Sharks

Bucks use high-scoring first half to get past Pacers

Mother of B.C. boy who was handcuffed says children's hospital should have been safe space