Under the baseline scenario of the latest population projections issued by Eurostat, the EU’s population will continue to grow older.

This can be illustrated by the old-age dependency ratio, defined as the ratio of the number of elderly people (aged 65 years and over) compared with the number of people of working-age (15-64 years).

According to new data published on Monday by Eurostat, the EU’s old-age dependency ratio is projected to be at 57% in 2100, almost double that of 2019 (31%). This means that there will be fewer than two persons of working age for each elderly person aged 65 and over.

The projected increase in old-age dependency ratio follows the trend observed in the past decade (26% in 2009), the report noted.

At the other end of the scale, the lowest ratios are projected in Cyprus (52%), Sweden and Czechia (both 53%), Germany, Denmark and Belgium (all 54%). 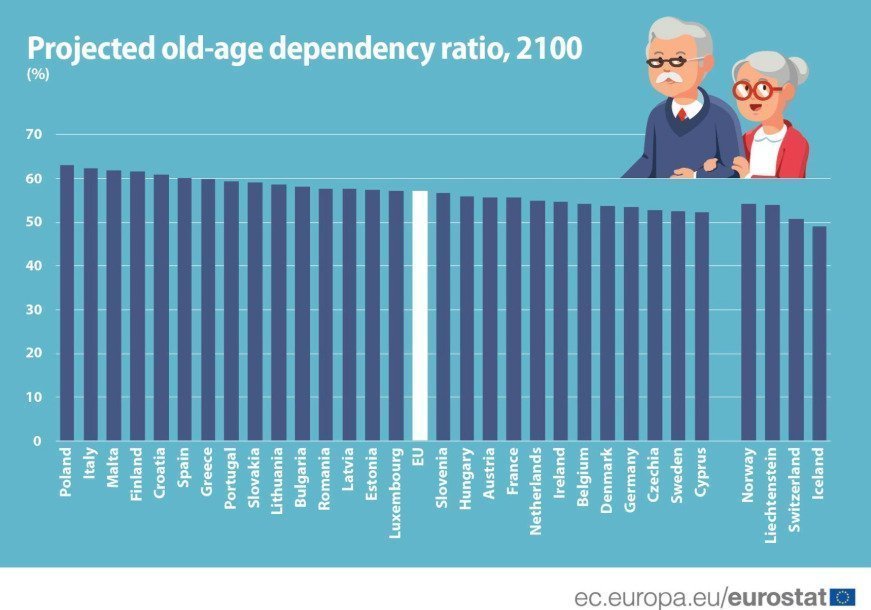 Monaco acquired defender Disasi from Reims for 13 million euros
Juve showed the guest uniform for the 2020/21 season
Chernyshenko about Euro 2020 in St. Petersburg: Despite the postponement, the organizers will keep the fanzones and trophy tour of the European Cup
Jesus used to eat too much fast food and want to shoot himself because of bad matches. Then I hired a personal trainer
David Silva's Father: The son loves Serie A and says he can play there until he is 40
Alexis Sanchez: I really wanted to stay at Inter. I found a family here
Emil Heskey: Salah should have moved to another club if Liverpool had not taken the Premier League
Source https://in-cyprus.philenews.com/cyprus-has-lowest-projected-old-age-dependency-ratio-in-eu-report/

More sections of Kyriakou Matsi to open on Saturday

Sexual abuse lawsuits against Greek Orthodox church schools in US

Top 10 most expensive paintings in the world

Celebs who are still married but living separate lives

Hoteliers relieved over UK Jet2’s resumption of flights to Cyprus