WHEN someone finally comes to write The Rise And Fall Of The BBC they should devote several pages to the knockabout show Total Wipeout.

That rarest of things. A Saturday night BBC1 staple that didn’t involve dancing and appealed to everyone, from children to psychopathic loners, who loved the real sense of jeopardy provided by the Argentinian assault course and its famous big red balls, “the four foam foes”.

As quickly as it became a cult classic, Total Wipeout was axed, in 2012, by new BBC1 boss Danny Cohen to make way for his own light-entertainment “masterpieces”, like Richard Hammond’s Secret Service and Don’t Scare The Hare, and all the fantastic excuses that followed in their wake.

“People didn’t engage with the robot in the way we hoped.”

Under the impression the BBC knew what it was doing, though, other countries also junked Total Wipeout. The Buenos Aires set became a housing estate and the Beeb spent the next eight years trying to fill the slapstick void with feeble copycat shows like Zoe Ball’s Can’t Touch This, which the viewers most certainly wouldn’t. Not even with a pole-vault stick.

The market does not lie, though.

Affection for Total Wipeout never died and during lockdown the numbers have piled-up on YouTube, where you can still watch the original 2009-2012 version, hosted so beautifully by Amanda Byram and Richard Hammond.

Eight years later then, the inevitable’s happened. BBC1 has finally bowed to public pressure and brought the show back.

They wouldn’t be overpaid television executives, obviously, if they didn’t believe they could improve on perfection. So they’ve added the two blokes off Top Gear and repackaged six random old episodes as Total Wipeout: Freddie (Flintoff) and Paddy (McGuinness) Takeover, which they do with an “ouch”, another “ouch” and an “ouch” again.

There are many more “ouches” to come as well, because whereas the original episodes took a month to produce, I reckon this lot had about 48 hours to come up with a script for Freddie and Paddy.

It leads to a lot of route-one puns, which I can live with, and a hell of a lot of self-reverence, which is harder to stomach. Top Gear, cricket and even Take Me Out (“Let the belly see the flop”) all got a nod on Saturday night.

“The model’s Hugo bossing it.” “I like what you did there, Pad.”

This is a matter of taste, clearly, but in the process they’ve forgotten what Amanda Byram understood instinctively and Richard Hammond understood eventually.

The contestants are the stars, not the hosts.

It may be obvious by now I’m a bit in love with Total Wipeout, but this isn’t just nostalgia speaking. The great thing about the internet is that Saturday’s edition (series four, episode two) is available to watch on YouTube.

So I did, and it was a magical, transformative experience.

Suddenly the same contestants had nick-names, back stories, graphics, running jokes, appropriate music, including Every Loser Wins, by Nick Berry, and fully formed punchlines: “22 hydraulic boxing gloves versus one Essex girl. It almost sounds like a fair fight.”

To watch it is to understand why Freddie Flintoff, at the start of Saturday’s reboot, described Wipeout as “the greatest game show in the history of the earth”.

But Total Wipeout remains the most gloriously funny and irreverent two fingers to the mollycoddled, sob story-ridden safe space British TV has become and they need to bring it back properly, please.

’Cos, Lord knows, we could all do with a laugh.

Unexpected morons in the bagging area

CELEBRITY Mastermind, John Humphrys: “The Matilda Way is a highway that extends for more than 1,000 miles from Cunnamulla to Karumba, in which country?”

Tipping Point, Ben Shephard: “How many contestants compete in an episode of the Channel 4 gameshow Countdown?”

Rolling In It, Stephen Mulhern: “In Einstein’s equation E=MC squared what does E stand for?”

BBC2’S shameful two-parter Castro Versus The World isn’t a serious documentary, it’s an adolescent love letter from a bunch of over-grown, middle-class students to a Stalinist despot.

So besotted are the production team with the former Cuban leader, they occasionally call him “Fidel”, while referring to Americans as “Kennedy”, “Nixon” and “Kissinger”.

They also seem to be under the misappre- hension that he was merely fighting “Western imperialism”, in countries like Angola and Algeria, rather than doing the Soviet Union’s Third World empire-building for them. Victories are celebrated as “audacious” and “heroic”, but the first episode actually played sombre music when the Berlin Wall fell, explaining: “The dire consequences Fidel Castro feared were now becoming a reality.”

For the record, because you won’t hear any of this mentioned by Castro Versus The World, the “dire consequences” were that millions of people were set free and the Soviet Union was no longer around to bank-roll a man estimated to have executed 17,000 political opponents.

He also put thousands more into forced labour camps, where they were subjected to torture and biological experiments, while also imprisoning, murdering and torturing homosexuals because, in Castro’s own words: “Faggots are the agents of imperialism.”

“A) They live underwater.

It’s D) They still haven’t recommissioned Rolling In It.

TO watch Miriam Margolyes whinge her way through BBC2’s Almost Australian is to understand why Sir Les Patterson taps his belly and says: “Mate, I’m fuller than a pommie’s complaint box.”

She is a woman overwhelmed by all her right-on London grievances. So Miriam’s picked a fight even before she’s even arrived at last week’s first stop, the McArthur River zinc mine, telling the camera: “Mining is tearing the good out of the ground for our own pleasures.”

Admittedly, there is a pause for self-reflection, when one of the miners very politely points out Miriam’s own house roof is made of zinc. But it lasts only a nanosecond before she’s scrambling back to the moral high ground, preaching vegetarianism to a cattle farmer and lecturing Flight Centre CEO Graham “Skroo” Turner about taxation and environmentalism, as if she’d swum to Australia, rather than flying.

It’s a waste of breath, obviously. Australians are having too much fun being Australian to squander any time on political correctness.

A point that I thought Miriam had finally understood when she went for a paddle on Burleigh Heads beach, in Queensland, one of the most glorious places on earth to swim.

But no. Two minutes later, the woman who a couple of months ago wished Covid death upon the PM and had been met with nothing but warmth and hospitality on her trip concluded the show by saying: “I want Australia to become kinder.” Fine, but you first, Miriam.

ADVERT partnership of the year?

ITV’s desperate decision to relocate I’m A Celebrity to North Wales, rather than cancelling it.

Netflix’s big-fuss-about-nothing documentary Anelka: Misunderstood, turning out to be a public relations exercise.

Every predictable sod in Britain describing A Suitable Boy as “vibrant”.

And Channel 4 axing Ollie Ollerton and Jay Morton from SAS: Who Dares Wins on the grounds the show is too male and white.

’Cos that really would’ve been your first thought if the SAS had rescued you from the Iranian Embassy, wouldn’t it: “Yes, but is your troop diverse enough?” TV people, I despair.

Quiz show misunderstanding of the week

The Chase, Bradley Walsh: “The title of which Dane’s autobiography is usually translated as The Fairytale Of My Life?”

Glen Johnson: “You can see what Henderson does when he’s not there.”

Jake Humphrey: “As a final, it’s been a half of two halves.”

And Alan Shearer: “You don’t know what you’re going to get from him but you always get hard work.”

Lookalike of the week

BBC1 screening the original and best series of Line Of Duty, on Monday nights. The quiet and bespectacled Professor Omar Mohammed being unveiled as “Mosul Eye”, the heroic blogger who defied IS, on the outstanding finale of BBC2’s Once Upon A Time In Iraq.

He’s No23 on the menu, Alex, and would be a great accompaniment to some Tarka Dal Pacino or a bowl of Rita Pakora. 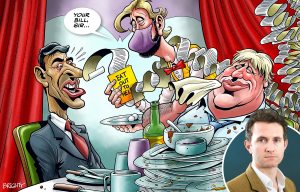 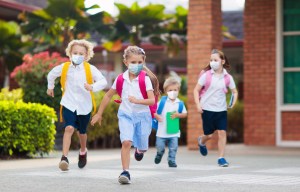 Kids deserve a proper start in life, schools MUST open from September 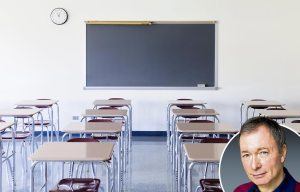 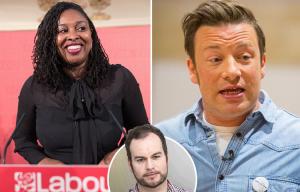 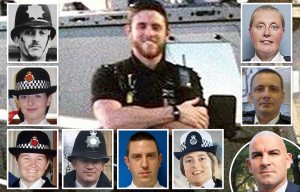 Great TV lies and delusions of the week

STEPHEN Mulhern: “Welcome back to Rolling In It, already an incredible show tonight.”

This Morning, Matthew Wright: “I am gorgeous, you are too, Eamonn. We’re all beautiful.”

Barcelona announced Suarez's move to Atletico
Barcelona will receive 2 million euros for the transfer of Suarez in the seasons when Atletico reaches the 1/4 finals of the Champions League
Chelsea's newcomers came off in the League Cup: Havertz scored a hat-trick (the first of his career), Chilwell an assist, Silva played an hour
Manchester United will lose 139.39 million pounds if the Premier League season is held without spectators - the most in the League
Ruediger - Barcelona's priority transfer target
Arsenal have won 6 matches in a row
Inter midfielder vesino is In talks with Napoli. He was offered to Zenit
Source https://www.thesun.co.uk/news/12365871/what-has-paddy-mcguinness-done-to-brill-total-wipeout/

Family of man shot by police pushes for charges

Dad abandons son, 11, at home for five days while he jets off on Italy holiday

ADVERTORIAL: Aldi employee shares staggering salary you can earn as a manager – plus perks

Police officer stabbed and three others attacked while attending 'fight'

‘I’m not a fan’: Donald Trump launches blistering attack on Meghan Markle and says he wishes Prince Harry ‘a lot of luck’

‘We want to get rid of the ballots’: Trump won’t commit to peaceful transfer of power, pushing voter fraud claims instead

Lukashenko sworn in as Belarus leader as protesters clash with police

Coronavirus breaks out at Glasgow University as 124 students test positive

We need to learn about the long-term effects of Covid-29, warns MP

House spotted with Christmas decorations up three months before December 25

Sluggish practices are the latest concern for Gase, Jets

What is Trump’s approval rating?

One police officer stabbed and three others attacked in Oldham

In Taylor case, limits of law overcome calls for justice

Shannon Briggs offers to fight Mike Tyson and step in for Roy Jones Jr as he says ‘Tag me in, champ’

Who is Greenville Riverside High School coach Eric Cummings and how did he die?