FRANCE'S World Cup stars got together at their training base in Clairefontaine with preparations for the World Cup well underway.

Arriving in their usual questionable attire, the likes of Antoine Griezmann and Kylian Mbappe were put through their paces on the training pitch. 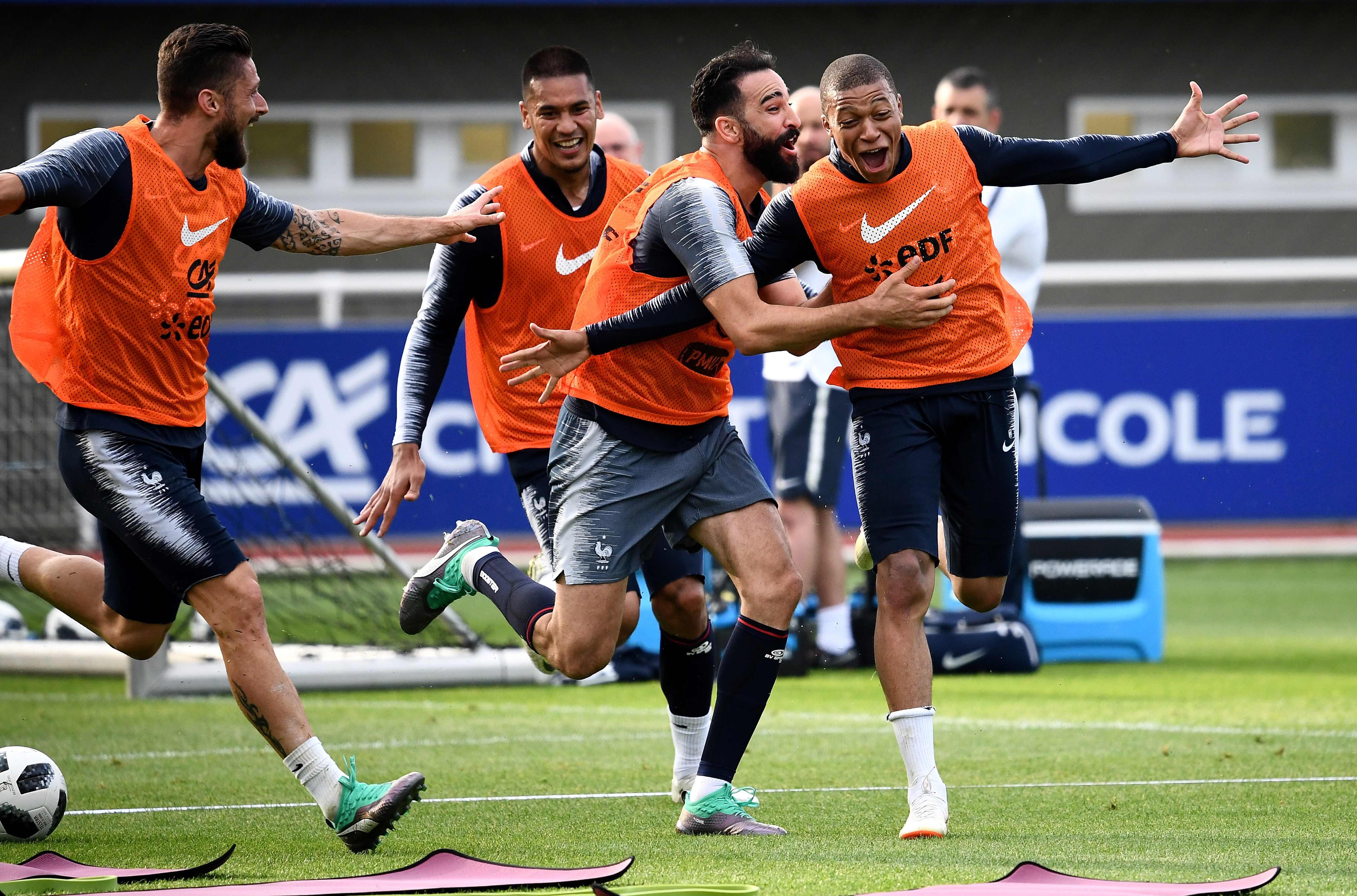 Kylian Mbappe was mobbed in training by his team-mates

Morale among the French group has been questioned in the past but they appear to be a close-knit bunch as they laughed and joked in training.

Wonderkid Mbappe appeared to hit the net again before being mobbed by his team-mates.

The Paris Saint-Germain ace then wrestled with Paul Pogba on the ground with the pair cracking up. 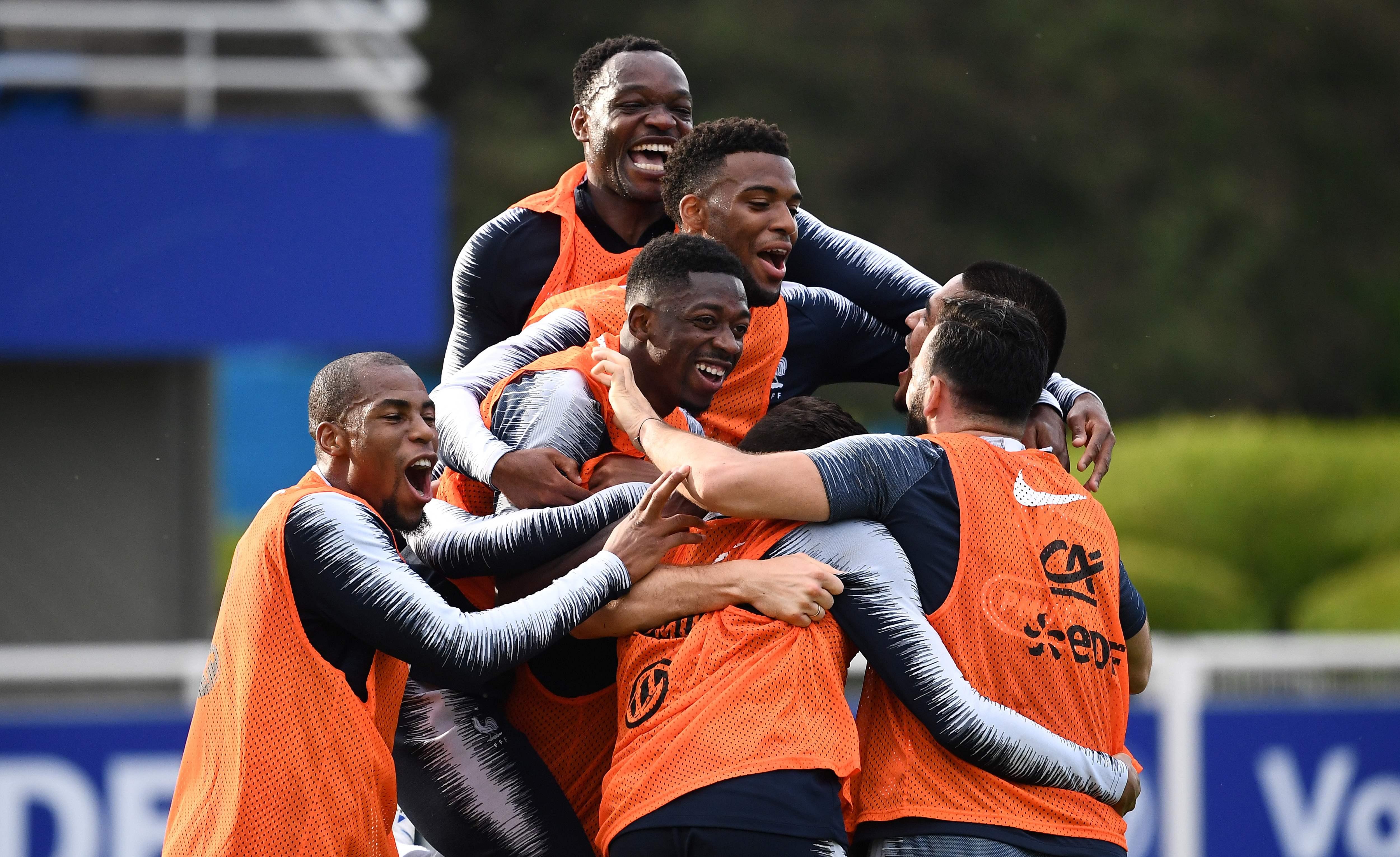 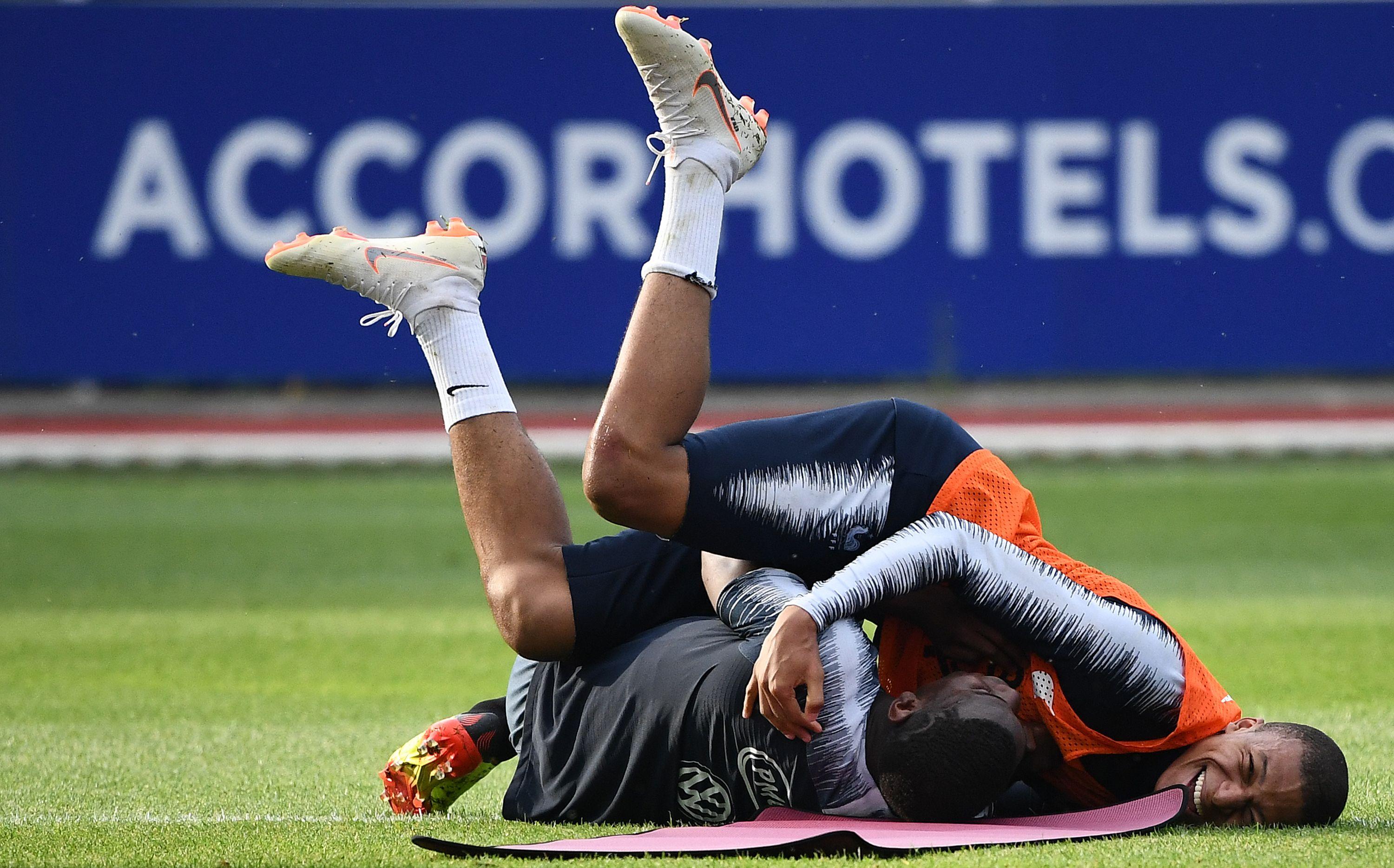 They showed glimpses of their ability against the Italians with Samuel Umtiti, Griezmann and Ousmane Dembele on target in the 3-1 win.

Didier Deschamps' side will have one more warm-up game against USA on Saturday before they face Australia in their group opener.

The French boss will already have a good idea of his starting XI ahead of the first match with star man Griezmann handed the No7 shirt. 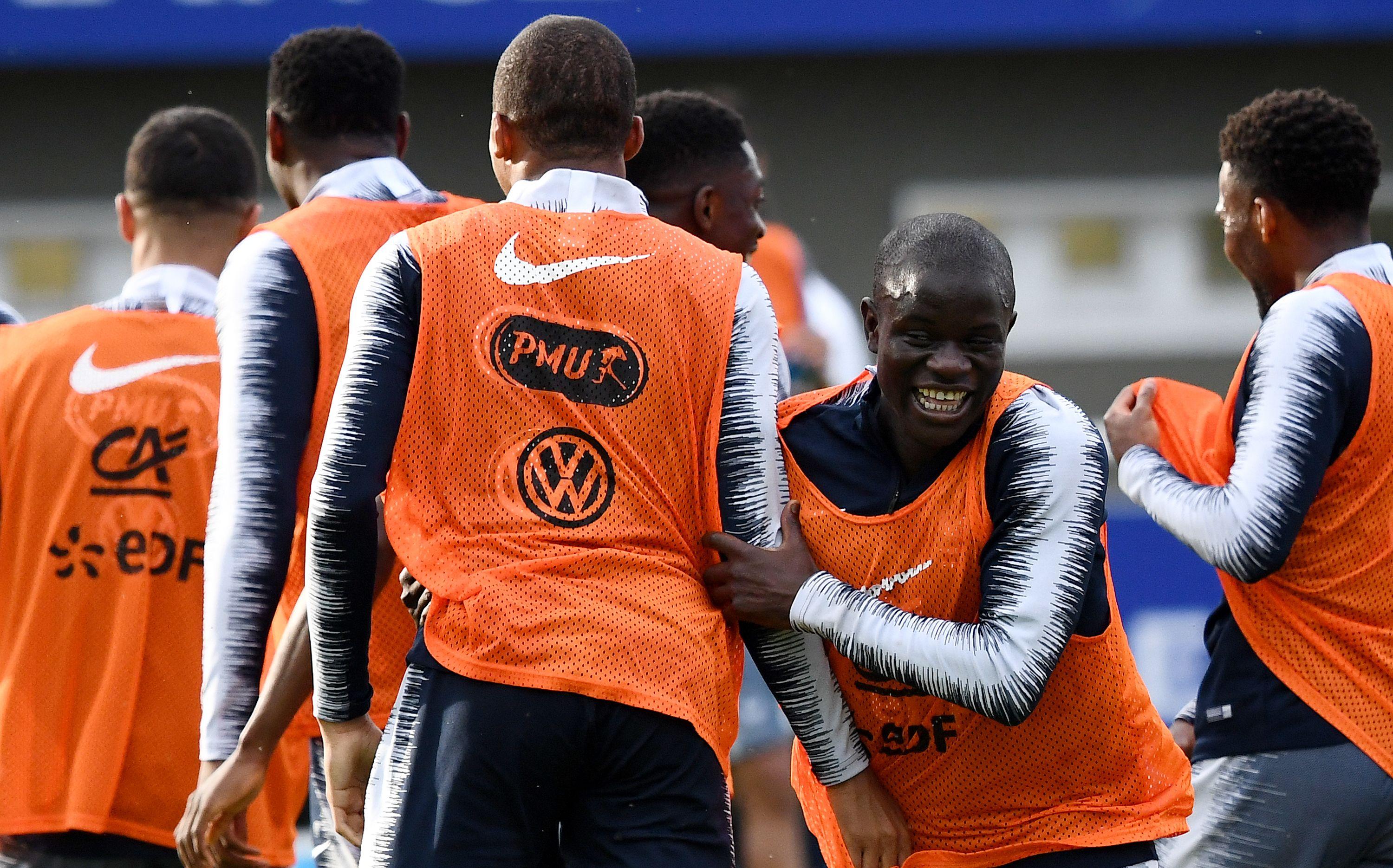 France head to Russia as one of the tournament favourites 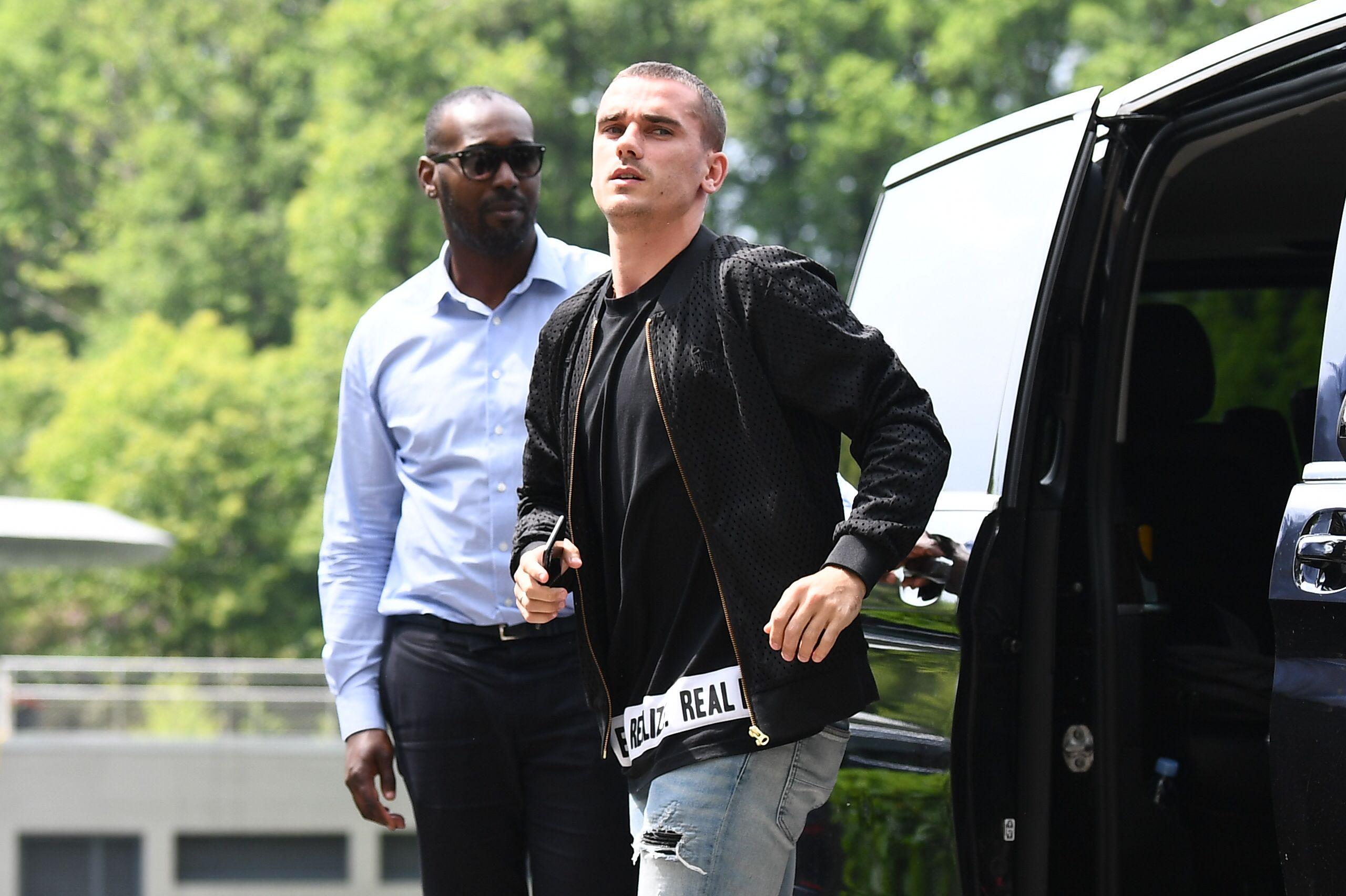 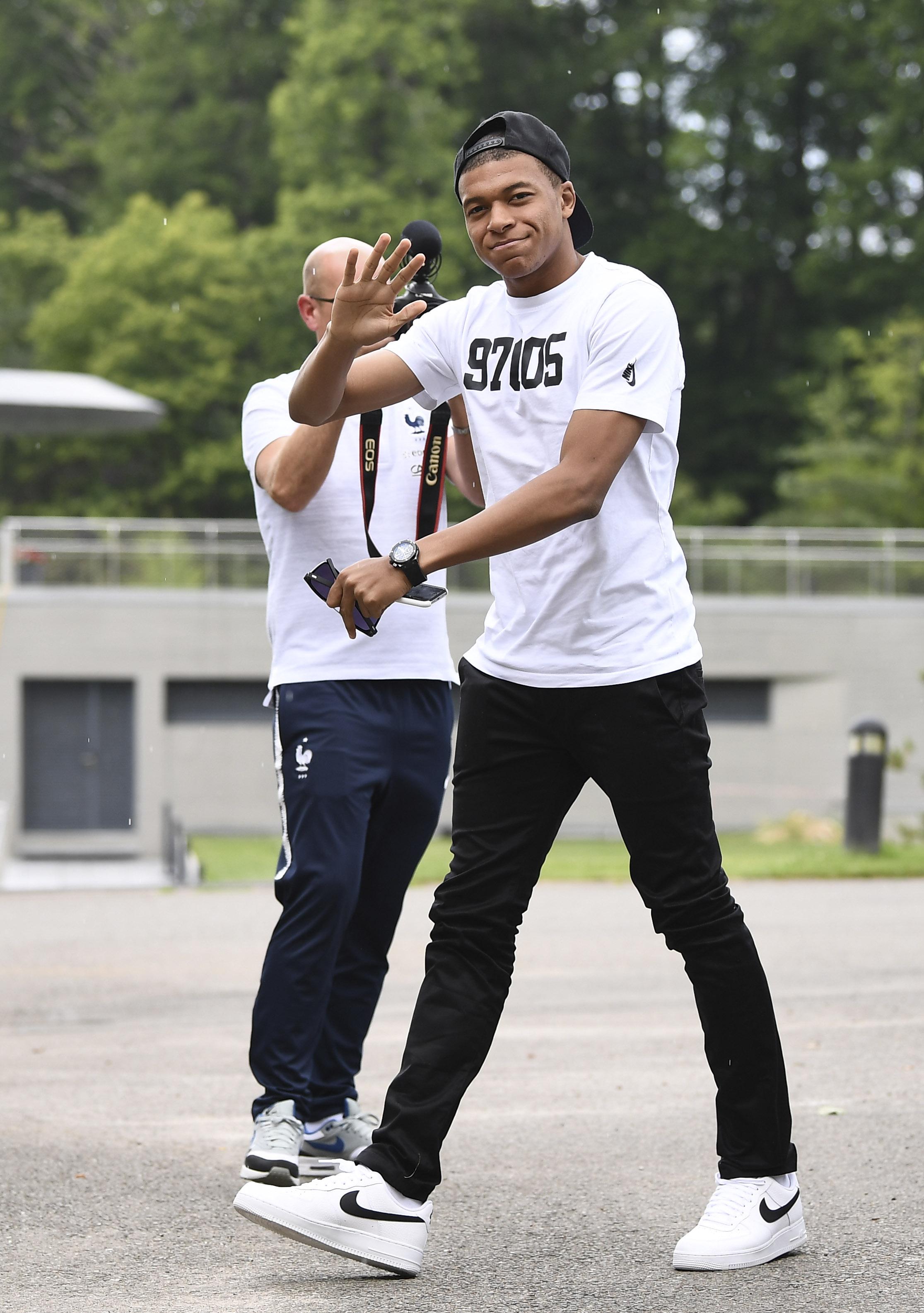 Chelsea striker Olivier Giroud has been given the No9 shirt with Paul Pogba wearing the No6.

The Manchester United man will be instrumental if France are to go far in the tournament.

But he didn't enjoy his finest appearance in a France shirt in Friday's win despite playing in a preferred role in a three-man midfield.

He was previously dropped by Deschamps for the friendly defeat by Colombia in March. 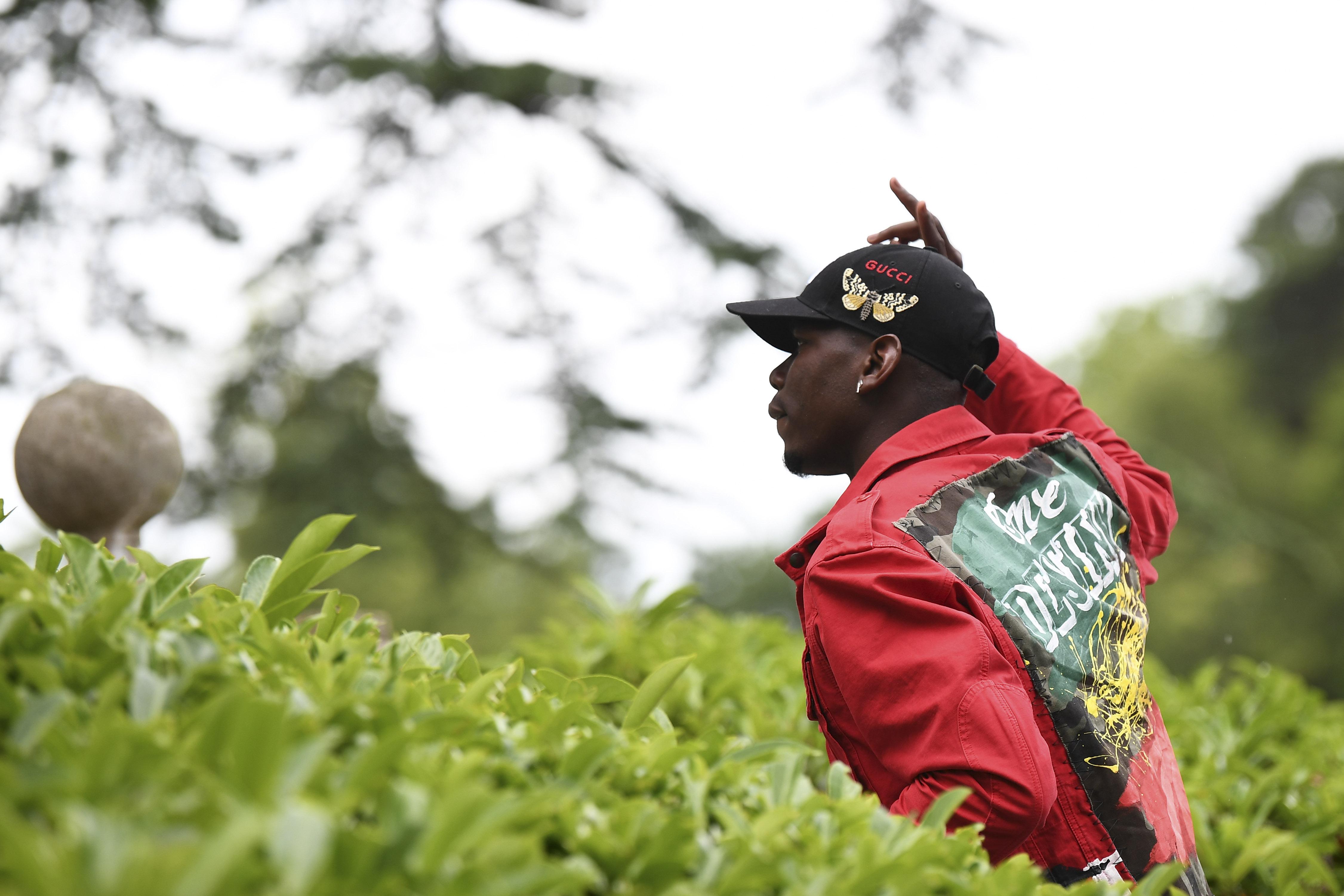 Question marks were raised over Paul Pogba's performance against Italy 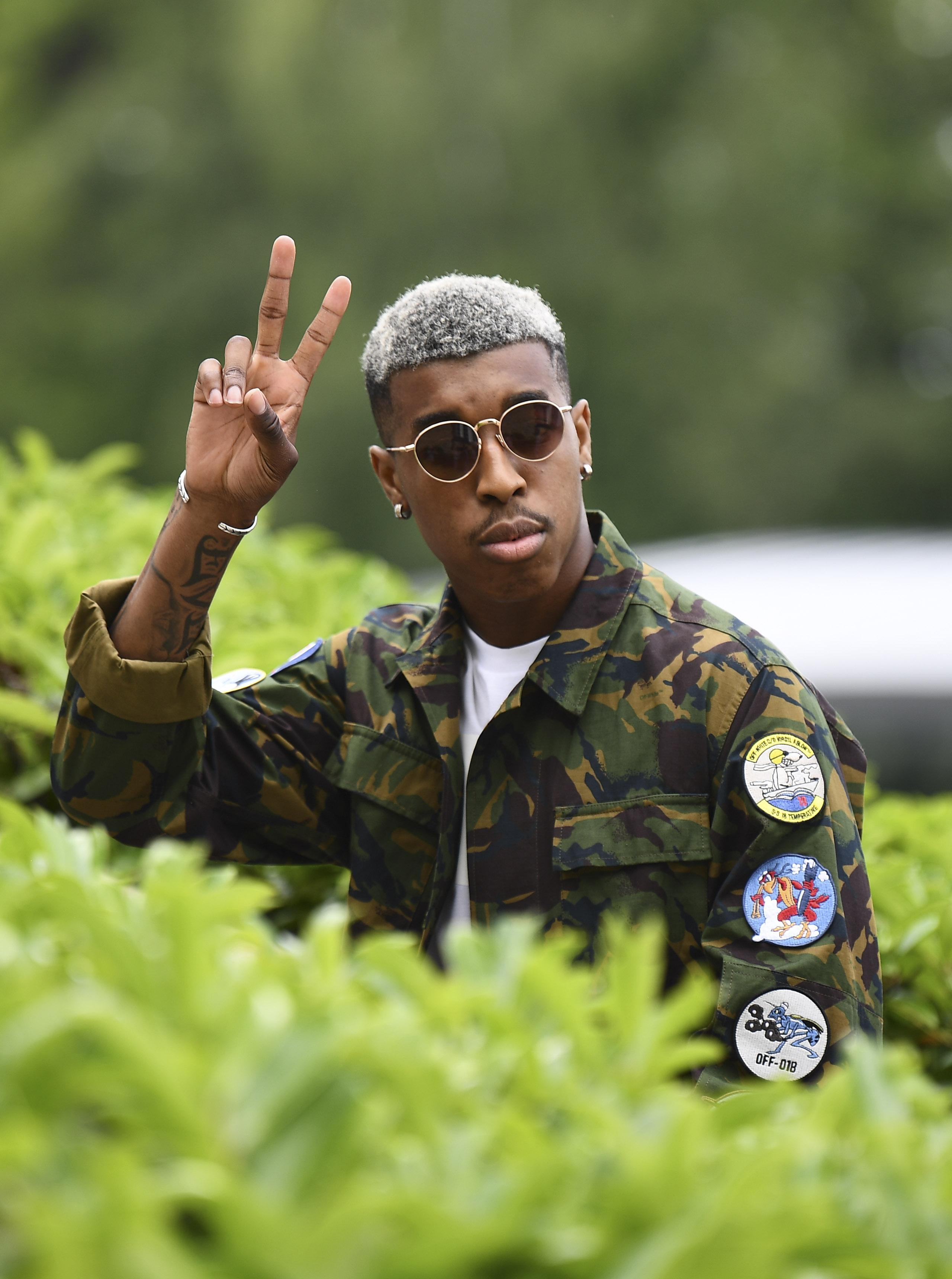 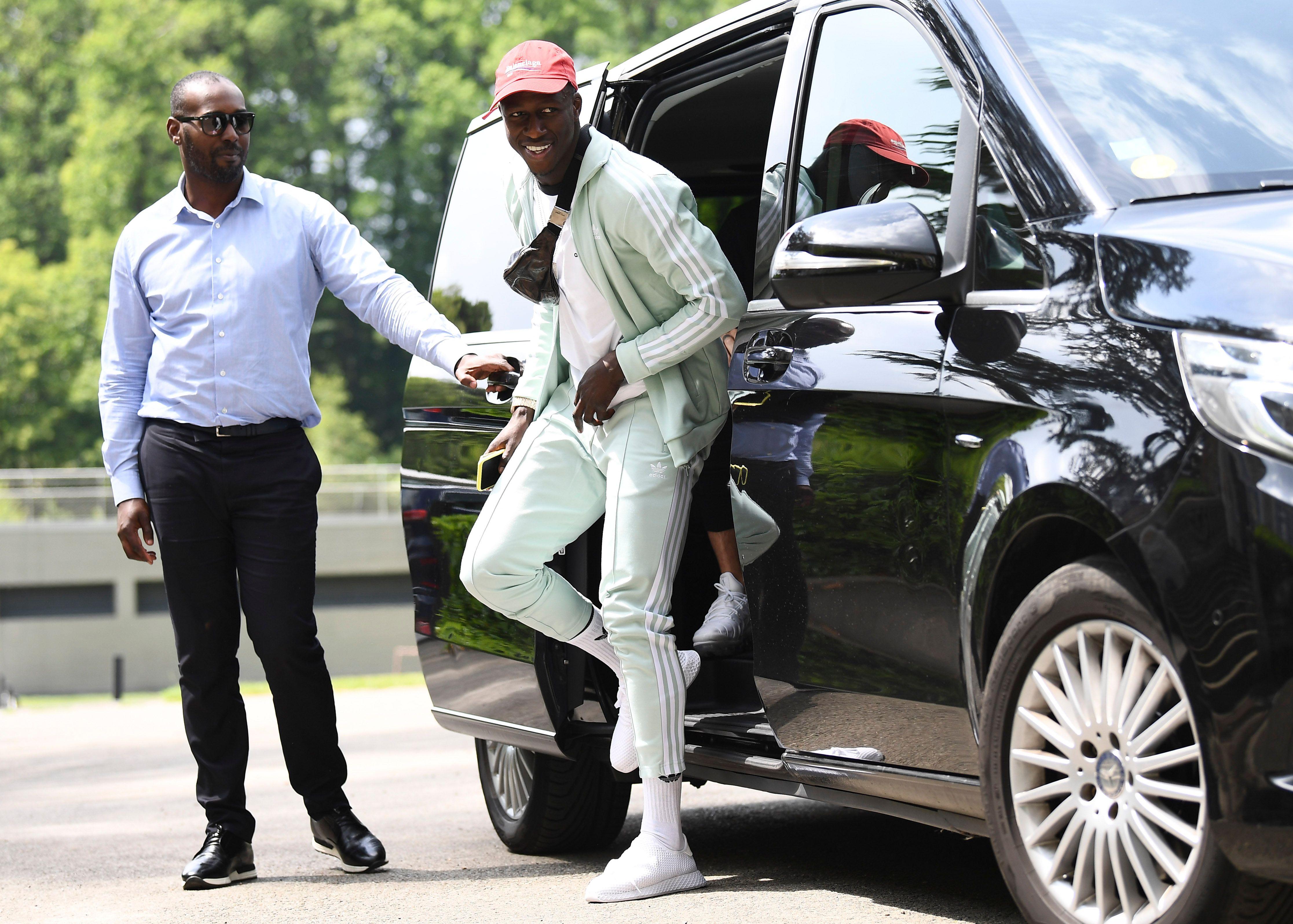 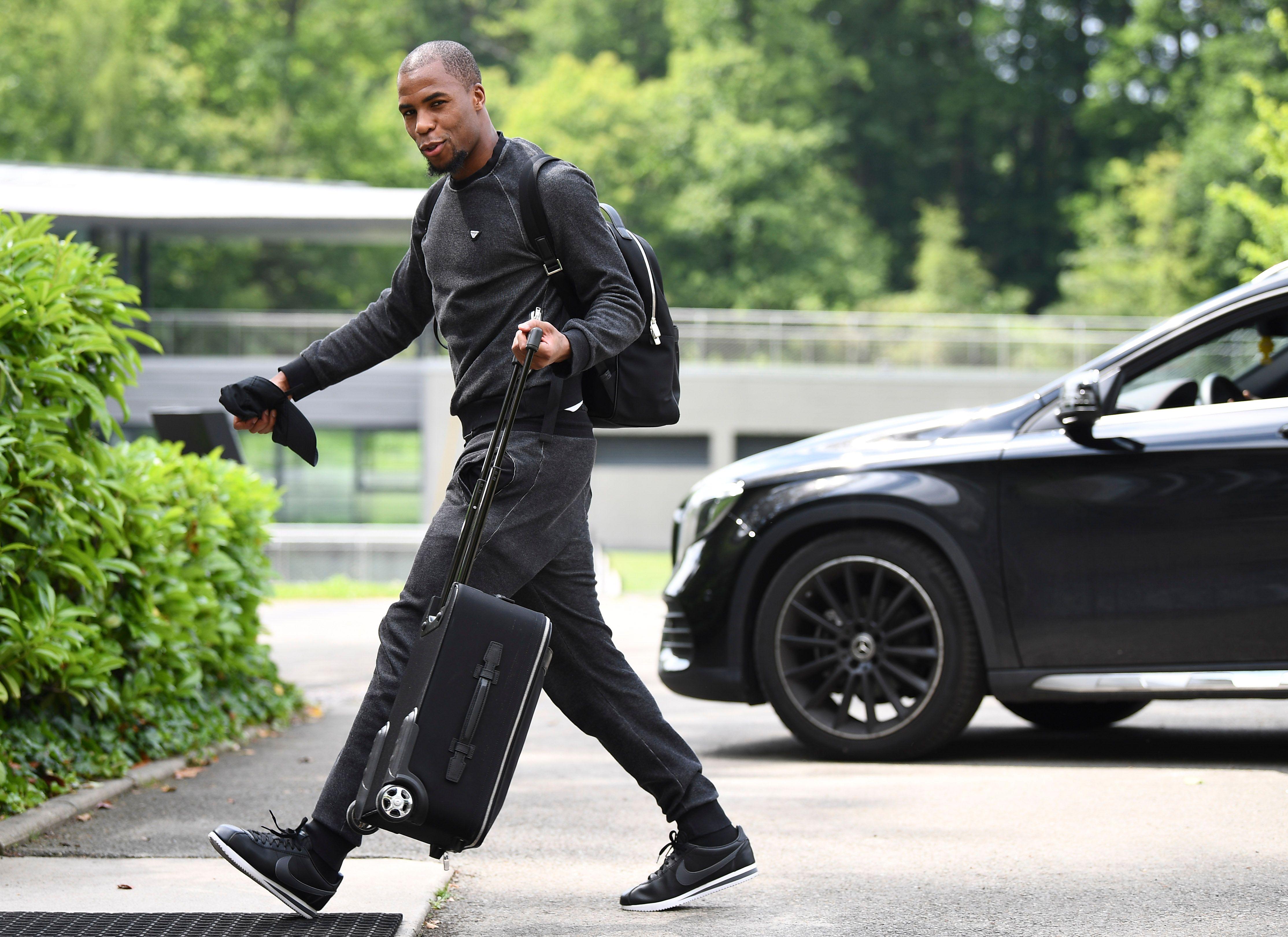 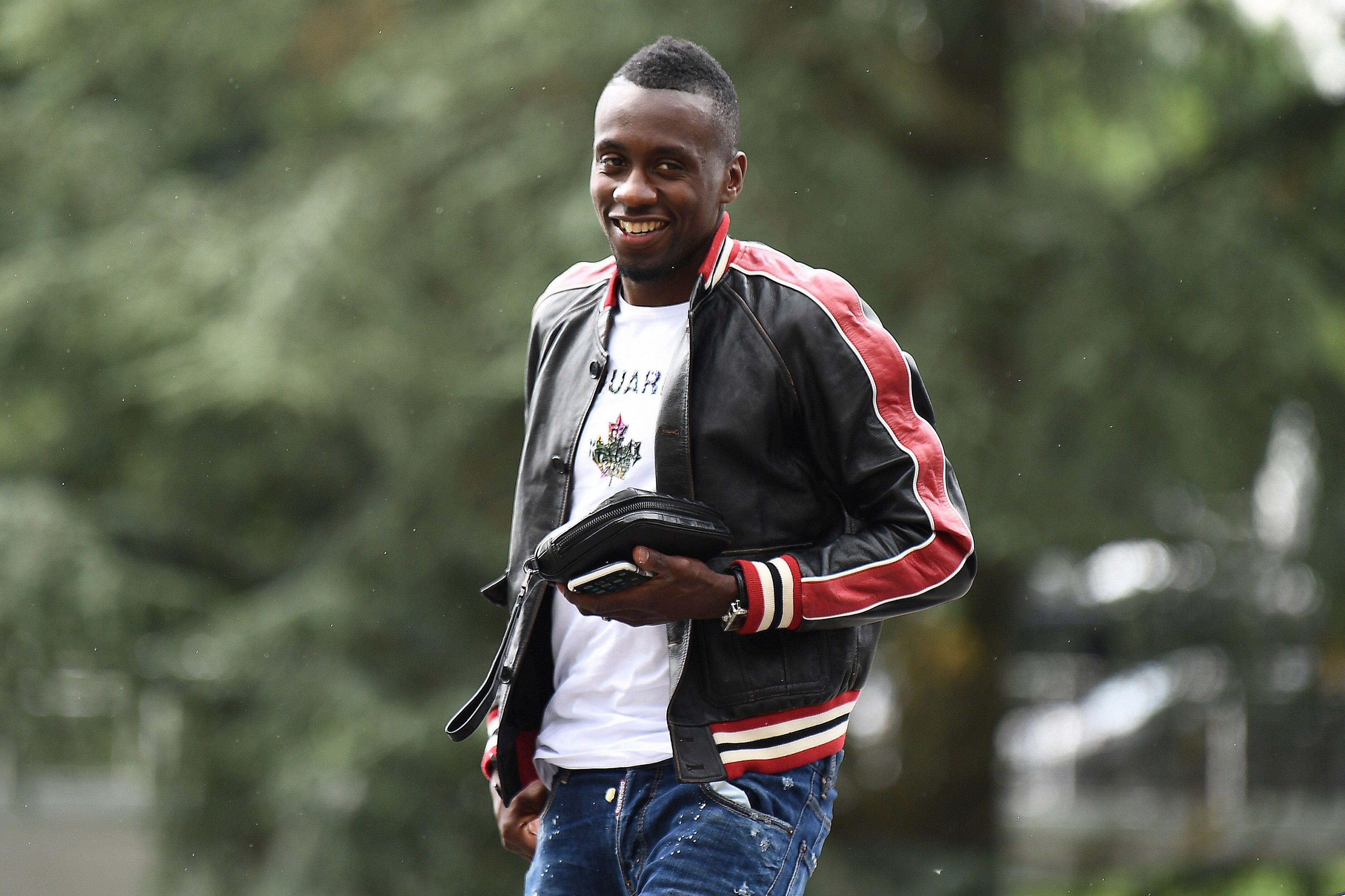 But the gaffer insists he's still indispensable despite his performance against Italy.

He said: "Not everything was successful, but he helped the team to be well organised.

“I don’t question Paul’s potential. If I called him up, it’s because he’s indispensable for me."

Pep Guardiola: I would have stayed at Manchester City and in League 2
Manchester United is ready to sell Alexis, Lingard, Smalling, Dalot, Jones and Rojo
Frank Lampard: I expect more from Chelsea, but now the result is most important
Atalanta does not lose 15 matches in a row – 13 wins and 2 draws
Lorient threw one newcomer off a plane and sent another under the water-all for the sake of presentations on social networks
Pasalic scored a hat-trick in the match against Brescia. Atalanta smashes the opponent 6:1
Rummenigge on Ribery: Hennessy was like a second father to him, and I was like a second mother
Source https://www.thesun.co.uk/sport/football/6449052/france-squad-look-in-high-morale-as-squad-numbers-are-released-ahead-of-world-cup/

Boy, 3, in hospital and unable to walk after being bitten by adder during picnic

John Legend admits history of cheating in past relationships before meeting Chrissy Teigen: 'I was dishonest and selfish'