PRINCES William and Harry ended their two-year feud after realising it was “now or never.”

The brothers decided to hold secret peace talks because both feared the breach might never be healed if Harry moved away.

But sources say Harry is still at odds with father Prince Charles.

The peace talks took place away from the official negotiations about the Sussexes’ future — with Kate and Meghan joining in some of the brothers’ discussions.

A senior royal source said: “William and Harry have spent time together privately away from the official Sandringham Summit working on their relationship and discussing their future.

“It has been ground-breaking in terms of saving their bond as brothers and has been totally driven by them.

“But Kate and Meghan, who was in Canada, did join in with some of the talks on more than one occasion — which is another sign of a real thaw in their relationship. Things are better.

“They decided to cut out all the toxic people stirring around them to deal with each other man-to-man as brothers.

"Given Harry is now permanently moving away, there was a realisation if they didn’t sort things out now, they never would.

“Of course there have been serious differences in opinions but the family warmth is back. And they’re sad they’re going to be so far apart.”

The brothers have been waging a civil war for the past two years, culminating in Harry and Meghan’s decision to abandon their royal role, relinquish their HRH titles and leave the UK.

However, sources close to the brothers said Harry remains at loggerheads with Prince Charles and Camilla following a number of disagreements.

The insider added: “It’s fair to say that the past week has brought William and Harry back together but the relationship with Charles and Camilla is far more complicated and complex.

“There remains a real lack of trust there and it’s going to take some time to resolve.”

Harry seemed in good spirits tonight as he arrived at The Ivy restaurant in Chelsea, West London, for a private fund-raising dinner for his Sentebale charity. He was due to deliver a speech.

Sentebale, which supports the mental health of youngsters affected by HIV in Lesotho and Botswana, was co-founded by Harry in 2006.

It’s fair to say that the past week has brought William and Harry back together but the relationship with Charles and Camilla is far more complicated and complex.

Ten days ago The Sun exclusively revealed that Harry and Meghan planned to leave the UK for Canada and step back from royal duties.

On Saturday The Queen confirmed that from the spring they will relinquish their HRH titles as they seek “a more independent life.”

The Sun can today reveal Saturday’s statements from the Queen and Buckingham Palace were delayed numerous times until the monarch, Charles, William, Harry and Meghan were all happy with the contents.

Some senior courtiers are furious the Queen included certain concessions to the couple after their friends issued threats in the media of damaging tell-all TV interviews.

But a senior Palace source said: “Of course, the aim was to get the issue resolved by the end of Friday.

“This was not a simple decision — many different parties had to be happy. But it’s not fair to simply blame Harry and Meghan.

"The Queen wanted a statement that was warm but also made clear she is very much in charge.”

The aide stressed the Queen’s reference to the “challenges” and “intense scrutiny” Harry and Meghan have faced was not a criticism of the media.

The source said: “The Queen was actually making the point that if you want to remain in the Royal Family, that scrutiny is part of the job.

“She also wants to make the point that it’s now the responsibility of the whole family to look forward, not backwards.”

Friends of Harry and Meghan praised the Queen for bringing the whole family together in her eventual solution.

One said: “In agreeing to this agreement, the Queen has single handedly evolved the monarchy. Harry and Meghan now believe the Queen is a great moderniser.

“She’s given them a home in their backyard and wants them to keep it. She just wants them to pay for it privately now they are not conducting royal duties.”

The Megxit transition will include consultations with the Sussexes ten-strong Buckingham Palace team about their futures.

In agreeing to this agreement, the Queen has single handedly evolved the monarchy. Harry and Meghan now believe the Queen is a great moderniser.

Insiders stressed Meghan is also still intending to become a British citizen — but admitted those plans could change.

A courtier said: “These are uncharted waters. The transition starts today and there is much to work through.

“Harry and Meghan will no longer require a staff at Buckingham Palace but they want to look after the people working for them. 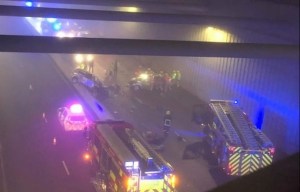 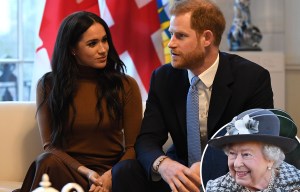 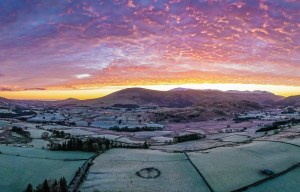 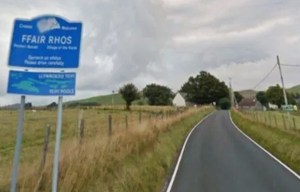 Boy, 3, killed in caravan fire as brother, 4, is left fighting for life 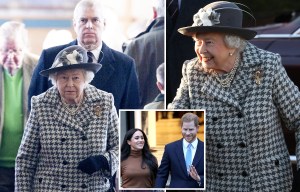 "That could involve some moving overseas with them or working as part of a skeleton staff in London.

“At this stage, Meghan’s intention is to continue to apply for British citizenship. It might just take a little bit longer. Lots of details have to be looked at.”

There are also questions over whether the couple will be able to use the Sussex Royal branding while doing commercial deals.

Walking 10,000 steps a day is not a ‘magical formula’ for preventing weight gain, study reveals

Trainee banker, 26, who had sex with boss, 56, threatened to 'destroy' him and teen daughter

From chocolate marshamallow to Insta pink, here are four unusual recipes you have to try this Pancake Day

Boy, 6, killed and sister, 9, critical after gunman opened fire on their car – leaving another girl, 7, cut by glass

Six out of ten Millenials have faked a sickie to avoid going into work, new poll reveals

Britons FURIOUS as civil servants attempt to sabotage Brexit - 'Get rid of them!'

Spy chiefs deny they are keeping secrets from Priti Patel

Facebook, WhatsApp and points 'wiped': The DVLA scams EVERY driver needs to know about

Mum and stepdad jailed for forcing boy, 8, to kneel naked in buckwheat

Chelsea news LIVE: Hazard set to miss rest of season, Lo Celso ‘should have been sent off’, Kante out UPDATE