LATCHING her ten-month-old daughter Una on for a feed, Nessa Whitehurst noticed an angry red rash creeping across her right breast.

As she ran her hand over the skin, there was no mistaking a grape-sized lump she had not noticed before.

Nessa made an appointment with her GP, convinced she had common breastfeeding problem mastitis — when inflamed breast tissue becomes infected.

But antibiotics failed to clear it up and tests revealed the 39-year-old mum of three had a rare and aggressive type of breast cancer.

The teacher from Leeds, who is married to Matt, 40, an insurance broker, has kids Una, now 18 months, Siofra, nine, and Finn, seven.

She says: “We always knew that we wanted three children and after Finn was born, I spent a few years focusing on my teaching career before getting pregnant with Una.

“We were delighted to be expecting again.

“She was going to be our last baby, so I really enjoyed my pregnancy and we savoured those early weeks with her as a newborn. I knew I wanted to breastfeed again, as I had with Siofra and Finn.

'I thought it was a blocked milk duct'

“I was always conscious of lumps and bumps while breastfeeding, so when the rash suddenly appeared after ten months and I felt the lump, I thought it was a blocked milk duct.

“I tried to gently massage it out in the shower but when that didn’t work, I made an appointment with my GP.

“My breast quickly became tender and it throbbed — both classic signs of mastitis.

“I’d never had any issues with feeding with Siofra and Finn, though.” Her doctor prescribed a two-week course of antibiotics to treat the infection.

Nessa says: “I was given one lot of antibiotics.

“But when the rash didn’t go after two weeks and I could still feel the lump, the doctor tried me on a different type.

“It was really odd because Una was starting to fuss when she fed from my right side.

“It was painful and very uncomfortable because Una wasn’t draining the milk properly from that side.

“She hadn’t done that before. It got to the point where she refused to drink from that breast. It was as though she knew. I was having to express milk to relieve the discomfort because I felt so full.”

After two weeks, Nessa went back to her GP — who referred her for an ultrasound, suspecting the lump could be an abscess.

Nessa says: “For the whole of November I was on different antibiotics while they tried to get to the bottom of it with ultrasounds and mammograms.

“They encouraged me to keep on with the breastfeeding because if it did turn out to be a bad case of mastitis and I stopped suddenly, it could make it worse.

“I never had mastitis with the other two children but friends had, so I knew the symptoms.

“I tried hot compresses in the shower and massaging the lump to clear the blockage but it didn’t work. Deep down, something told me it was cancer.

“It was going on too long and was not responding to the antibiotics. I tried to prepare myself for the worst-case scenario.”

A biopsy confirmed Nessa’s fears and last December, six weeks after finding the lump, she was diagnosed with stage-three triple-negative inflammatory breast cancer.

'I instantly went into survival mode'

She says: “It was just before Christmas and I instantly went into survival mode. At first I was really positive because the chances of beating cancer are so good. But when I read into my diagnosis online, it hit me.

“The survival rate for women with my type is around three years.

“The cancer looks like a spider’s web, so even though I was scanned several times at the breast clinic after I was referred by the GP, it didn’t show up.

“It was only detected by the biopsy. Probably the only reason I found the lump was because the cancer had trapped itself inside a milk duct.

“That was the reason why I had the rash and soreness. It’s common for women with my type of cancer to have a rash but it is less common to have a lump.

“If I had not been breastfeeding, I might never have found it.

“My grandmother died of breast cancer in her sixties but my type isn’t genetic. It is pure bad luck.

“I suddenly felt really angry because I thought breastfeeding was supposed to reduce the risk. I’d read articles about the health benefits of feeding and how it is proven to help protect against breast cancer.

“Luckily mine hadn’t spread to my other organs, so I was in the best situation to beat it.”

Nessa began chemotherapy on Christmas Eve to halt the cancer’s spread before surgery to remove her breast and lymph nodes the following June.

She says: “I had no choice to stop breastfeeding altogether when I was diagnosed.

“It felt unfair that the decision had been made for me but I couldn’t feed Una while having chemo.

“I felt guilty that unbeknown to me, I had been giving her milk from my cancerous breast — and even though I knew it wasn’t dangerous, that wasn’t a nice thought.

“We went cold-turkey and switched to formula feeding. Thankfully, Una happily accepted that.

“It was a very difficult time. I’d breastfed Una for almost a year by that point and all of a sudden she was switched to a bottle. Luckily, she is a calm and easy-going child.

“She adapted to bottle-feeding really quickly.

“Matt then took charge of the feeds so I could rest and save my energy for what lay ahead.

“Telling Siofra and Finn I had cancer was devastating.

“We took them to a park half an hour away because we wanted to tell them at a place that they had no association with, then we could leave it behind.

“While Siofra was old enough to understand what the word meant and the frightening implications, Finn asked lots of questions about whether I would lose my hair.

Lockdown meant Nessa had to go through the treatment and a mastectomy alone.

She says: “Matt had to be at home with the kids, so I drove myself to hospital for all my appointments.

“I didn’t have any choice but to get on with it.

“I knew that if chemotherapy failed to work, with my type of cancer there was no plan B.

“But by the time I had the surgery there were no live cancer cells in my body, which was amazing.

“After that, I had radiotherapy to reduce the risk of the disease returning.

“I’m due to finish that this month. Being cancer-free is incredible and it feels good that I’m winning the fight.

“It’s so important I share my story because there could be a mum somewhere who thinks she has mastitis and is waiting to see if it clears up by itself.

“Unlike other types, it can cause discomfort and sharp, shooting pains, like mastitis. 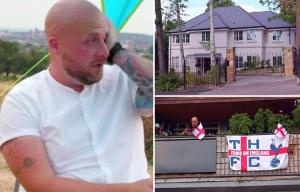 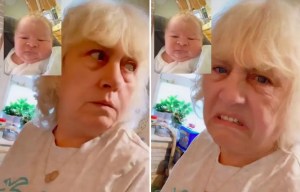 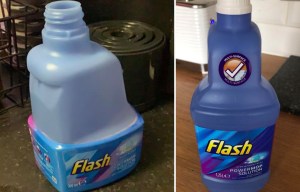 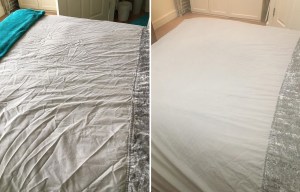 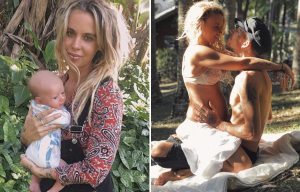 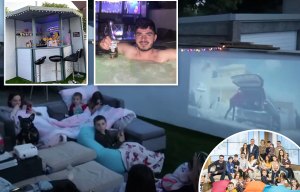 “It is so important to get unusual symptoms checked out.

“Breastfeeding helped me pick up the cancer just in time and Una is a happy, placid and content baby.

“Now We can enjoy being a family of five.”

LOOK OUT FOR THE SYMPTOMS

6While being diagnosed with breast cancer during pregnancy or while breast feeding is rare, it is important for women to be breast aware during, and after, pregnancy.

Research shows that breast cancer is reported in one in every 3,000 pregnancies, with most women being aged between 32 and 38.

Breasts can change a lot in pregnancy, so while changes are unlikely to be a sign of breast cancer, if you are unsure or notice anything unusual, you should talk to your midwife or GP.

It is important for all women to get to know what is normal for them. The signs and symptoms to look out for include:

On its own, pain in your breasts is not usually 7 a sign of breast cancer.

For more information about the signs and symptoms, call Breast Cancer Now’s free Helpline on 0808 800 6000.

Maccabi entered the Champions League without 11 players due to covid. UEFA allows you to play if there are 13 players from the application
Ole Gunnar Solskjaer: De Gea saved us for years, Henderson did the same today. Lingard played well
The semed said goodbye to Barcelona: Thank you for the opportunity to realize the dream. Eternally grateful
Juve have leased Morata from Atletico for 10 million euros with the right to buy out for 45 million
Barcelona and Atletico have agreed a move for Suarez (Fabrizio Romano)
At the 1950 world Cup, Amateurs from the United States beat England. The coach of the Americans compared their players to sheep, and the author of the winning goal went missing
Dan Henderson made his debut for Manchester United at the age of 23. He made 141 appearances on loan
Source https://www.thesun.co.uk/fabulous/12366396/found-breast-cancer-red-rash-boob-fed-baby/

Most Americans will wait to take coronavirus vaccine, poll finds

How the death of Ruth Bader Ginsburg could change America – podcast

Salah and Mane will be delighted with latest Liverpool transfer move

Brazil is not the environmental villain, Bolsonaro tells UN

Who are Donald Trump’s front-runners for Supreme Court vacancy?

'An object of pity': Former Trump advisor says rest of the world looks down on US

‘Good guys are demonized, criminals are canonised’: One of the officers who shot at Breonna Taylor speaks out in fiery email

Trump mocks Biden for wearing a mask: 'What was the plastic surgery for?'

Student left fighting for life after mistaking meningitis for a hangover

Lessons from the left behind: The lifelong consequences of missing school

With a second wave of coronavirus, now is not the time for a hard Brexit

Sex robots will be 'controlled remotely by humans from different continents'

'Our brief return to the office was oh, so sweet' - says Bradford business boss

'How do they do it where you came from?': Trump echoes racist attack on Ilan Omar and claims AOC is 'crap'

Julian Assange suffers from hallucinations and is at ‘high risk’ of suicide, psychiatrist says

‘The microphone is a microscope’: Woodward reveals his wife forced him to release Trump tapes

Vacuum-mad boy, 8, has over 100 customers after starting repair business

Footie statistics and shop visits teach children how to add up

Having sex after heart attack could boost chances of survival, experts claim

Police have broken up almost 60 house parties in Lanarkshire

Biden news – live: Cindy McCain to back Democratic nominee after Trump's attacks on her late husband