Lionel Messi held a private BBQ with his Barcelona team-mates at his house on Monday, ahead of his side's key La Liga clash with league leaders Atletico Madrid.

Barcelona beat Valencia 3-2 on Sunday, with Messi netting a brace and Antoine Griezmann also getting on the scoresheet.

Ronald Koeman's side has four league games remaining and, ahead of their important run, the squad attended a meal at Messi's house as part of a team bonding exercise.

According to Marca, the squad would normally meet at a restaurant but it was decided that they would have a BBQ at the captain's house in Castelldefels instead. 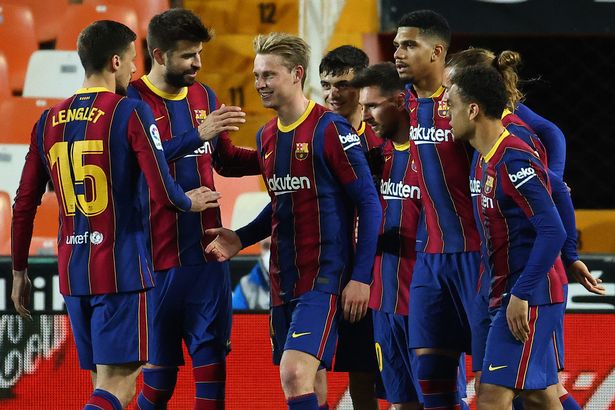 Barcelona superstar Lionel Messi hosted a BBQ for his team-mates on Monday, following their 3-2 win over Valencia at the weekend (Image: JOSE JORDAN/AFP via Getty Images)

The players attended the meal with their partners and, in footage captured by Spanish broadcaster Gol, they were heard chanting 'Champions, champions!'

There is just two points separating Barcelona and Atletico and Koeman's side will leapfrog the league leaders if they beat them on Saturday.

Barcelona president Joan Laporta is confident that they can win the league this season, saying: "I already said before the game against Valencia that if we win the five remaining games we're convinced we'll win the league. Messi hosted the dinner party at his house in Castelldefels (Image: Getty Images)

"Well, now there are no longer five, now we have four games left to win the title."

Barcelona's assistant coach Alfred Schreuder is also confident in his team's chances, saying: "We have shown character and the reaction has been good.

"We are alive in the title race and it very close. We do not look at others, we look at ourselves.

"Next week will not be a final match, there will be four more left and we trust our players to win La Liga. We have reduced the gap to Atletico since January and we have competed well these last three months.

"The past cannot be changed, and now we look to the Atletico game. We have a lot still in our hands."

FSG could be handed welcome financial boost this summer