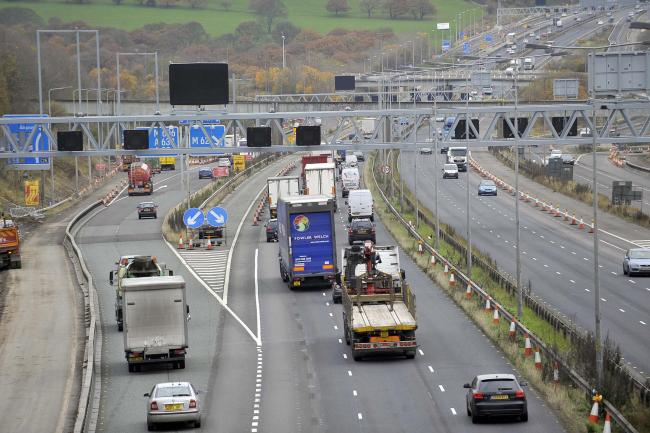 TRAFFIC LATEST : M62 Eastbound will be closed this morning after fire

THE M62 Eastbound will be closed this morning after a report of explosions coming from a burning lorry.

Firefighters called to the motorway found a trailer unit well alight and determined that the dramatic sounds of explosions had come from the vehicle's tyre bursting due to the heat from the blaze.

It is understood to have taken place between Junction 28 Tingley and Junction 29 Lofthouse around 4.15am, also leading to a fuel spillage.

West Yorkshire Police is asking drivers to avoid the area while teams clear the area, meaning it will likely be shut throughout the rush hour period and morning.

West Yorkshire Fire and Rescue Service said: "Crews are currently in attendance dealing with a fire involving the trailer of a Heavy Goods Vehicle.

"Numerous calls were received stating explosions coming from the vehicle, but on arrival this has proved to be the tyres of the vehicle that were exploding due to heat.

"The trailer unit is well alight and crews are currently using three hose reel jets and two breathing apparatus and are setting up a water shuttle to ferry water to the incident."

The #M62 remains closed J28 #Tingley to J29 #Lofthouse whilst @WYFRS continue tackling this vehicle fire. Diversions are in place. No delays. pic.twitter.com/Rjtfcminaf

There is also congestion along A650 Bradford Road as drivers divert via the M621 and M1 from M62 J27 (Gildersome).

Five crews from Ossett, Hunslet, Normanton and Leeds - were called to the scene.

The Werner scored his 25th goal in the Bundesliga. Only Lewandowski and Immobile have scored more in the top 5 European leagues
The goalkeeper of Leipzig Gulacsi made an assist in the match against Cologne
I didn't have many friends because of my hair. Inspiring stories of Shelvey, Collina and other athletes who lost their hair due to illness
Chelsea on the death of George Floyd: Join all those who call for justice and equality
Serie A will resume on June 20 with the postponed matches of the 25th round
Giroud on resuming training: Almost everyone at Chelsea has blisters
Deschamps screamed like a girl after my tackle. It didn't do me any good. Scholes on the disqualification to the final of the 1998/99 UEFA Champions League
Source https://www.thetelegraphandargus.co.uk/news/18369115.m62-eastbound-closed-morning-fire/?ref=rss

What is the Ebola virus and where is the latest outbreak?

I never dreamed I’d post videos in a bikini shaking my wobbly bits… but it helps people, says Chessie King

From thongs to high-wasted, find out which knickers are best for your bum with our guide

There is no excuse for NUFC's shoddy season ticket refund response

How students have already had their futures changed by coronavirus

Twelve teens on what they’ve learned in coronavirus lockdown

‘Coronavirus proves we can act in crisis, we must do the same on climate change’

Two women killed inside house as man is arrested for murder

George Floyd autopsy shows he died of asphyxia and his death was partly caused by other officers, lawyer says

Horse racing to return this month in Wales behind closed doors

Jack's 'discount Tesco' supermarket could be opening in Hull

Ricky Gervais in talks with Netflix for After Life Christmas special

Cardinal series 4 cast: Who stars in the BBC thriller?

An adopted man's journey to find his birth parents

Heartbreak as 'beautiful and kind' student, 21, went to sleep and never woke up

2020 election: Biden in best position for any challenger since Jimmy Carter in 1976, polls show

Collymore: I'm proud of Sancho, a talent using his skills and his platform

Jane Fonda speaks out on George Floyd death: 'Because we're white, we have had privilege'

Will there be a season two of Netflix’s Space Force?