Most bleary-eyed Brits work off their festive hangover by dumping their fir needles in the street for the council to pick up, or lug it to the local dump.

But John Williams, who cooks up Michelin starred food at The Ritz Hotel in London, reckons it is a waste.

In the first-ever Ritz cookbook he champions the powerful flavours of the Christmas tree.

He claims the needles make a delicious treat. 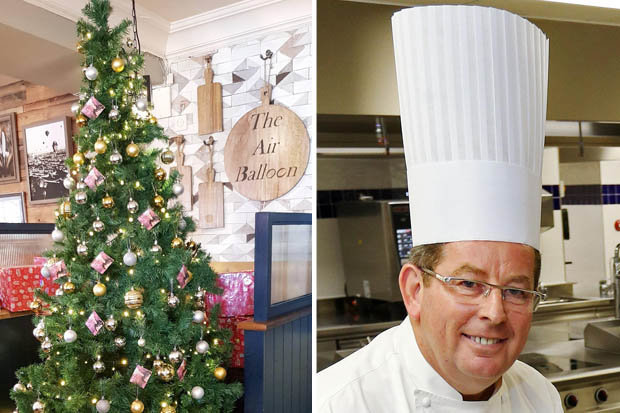 The cook, who has made food for the Queen and the Prince of Wales, says they give a citrusy zest to sauces, creams, oils, vinegars, dressings and mousses.

One of his favourite recipes for pine needles is on the Ritz’s autumn menu – a Douglas fir and lemon verbena cream.

He has a fan in TV adventurer Bear Grylls.

“I like a bit of pine needle tea. It contains massive amounts of vitamins A and C,” said the 44-year-old.

The unique festive recipe can be found in The Ritz London: The Cookbook, priced at £30.

David Silva: I will miss Manchester City💙
Giovanni Simeone: I Would like to play under my father's guidance. I dream of Atletico
Van der Vaart on Maguire: he tells his wife every day: I screwed up, but I still get paid a lot
Agent de Bruyne: Kevin is not thinking about leaving Manchester City. 90% of news is nonsense
Ronaldo is the king of alcohol. I was out with Vieri, begging for beer from the media, and I figured out how to drink in front of the coach
MLS is back: almost 9 minutes of protest against racism and a giant virtual adidas logo in the center of the field
Solskjaer on MATIC: I'm Glad he stayed. We need experience in a team with children who run around
Source https://www.dailystar.co.uk/news/latest-news/730115/john-williams-ritz-hotel-book-chef-christmas-trees-eat-michelin-star?utm_source=feedburner&utm_medium=feed&utm_campaign=Feed%3A+daily-star-latest-news+%28Daily+Star+%3A%3A+News+Feed%29

What do WWE legend Randy Orton’s tattoos mean? From touching tribute to wife on finger to sleeve honouring his kids

Special Bond DB5 is ready for its first mission

Why did RHONJ’s Teresa Giudice and Joe split?

The CX-30 is a crossover masterclass from Mazda

Netflix announces The Crown to have sixth and final season

Do you pay stamp duty in Scotland, Wales and Northern Ireland?

ADVERTORIAL: How to get a holiday from £10pp* in the Hull Daily Mail

Some Swansea bars won't be re-opening at all next week

The 25 best documentaries to watch on Netflix right now

Gyms reopening: What will the new rules be?

How to avoid contracting Lyme disease from ticks this summer

The infuriating things Johnson and Sunak did in the Commons

The 35 most terrifying horrors to watch on Netflix right now

Newmarket Races: Tips, racecards and betting preview for Day 2 of the July Festival live on ITV

BA protesters hold demonstration in Newcastle as 12,000 jobs could be lost

Wallsend mum: 'The drug that was keeping me alive was damaging my child'

Woman shot by police on a street in Liverpool

Impact of coronavirus on mental health is going to be 'massive', doctors warn

Netflix confirms sixth and final season of The Crown after cancellation

Police arrest man over 'threats to burn down shopkeeper's home'