MYLEENE Klass has revealed she had to censor her boyfriend's X-rated message after she revealed her new blonder hairdo.

The presenter, 42, debuted her new style on Instagram with a sultry close-up snap.

She then shared Simon Motson's response to the selfie, but it proved a little too saucy to go unedited.

Myleene teased: "Safe to say, the boyf like it."

Underneath fans could read Simon's comment albeit with certain parts redacted.

Last month Myleene's hair got her into a spot of bother as she burned her boob with straighteners.

The music star accidentally dropped her haircare appliance while getting ready for work this morning and left herself with a nasty burn.

Posting a topless snap, Myleene wrote: "Burned my boob! (Dropped my hair straighteners on it. Idiot.)"

She added: "A bag of ice and the last post! Happy Friday!"

Fans could be seeing more of Myleene later this year as it was recently revealed that Strictly bosses want her for the new series.

The broadcaster is the latest star to linked with the BBC series along with presenter Nicki Chapman, who recently recovered from a non cancerous brain tumour.

The signing would reunite the pair, who both found fame in 2001 on ITV's talent search Popstars. 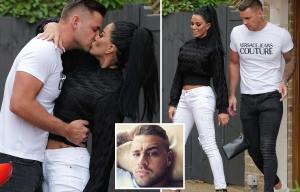 A source told the Daily Star: "Strictly want both to be in the line-up.

"They are household names and haven’t really worked together since Popstars so it would be an amazing reunion."

Messi bought a penthouse in Milan. It was reported that Inter is Interested in the player
Real advance refund the Youngster of rental Sociedade. Zidane is impressed with his performance
Barys 20 days before the start of the KHL: they do not know where to play, Legionnaires are cut off from the team
Areolaa returned to PSG after a loan spell at Real Madrid
Manchester United can lease Ousmane Dembele for a year with a buyout obligation
The rum is bought by a billionaire from the United States, who was filmed at Nolan in Dunkirk. His son fell in love with Rome while working with Ridley Scott
Hargreaves on Borussia's refusal to let Sancho go: this is a bluff. They are just trying to get more money out of Manchester United
Source https://www.thesun.co.uk/tvandshowbiz/12034700/myleene-klass-x-rated-message-boyfriend-new-blonde-hair/

What is Sun Cashback? All you need to know

Corrie fans have a lot to say about Dev's lockdown transformation

More than 10.5m meals dished up in Eat Out to Help Out's first week

Second stimulus bill could be agreed on THIS WEEK and $1,200 checks ‘could be sent in just six days’

Police use of ‘sinister’ facial recognition ruled a breach of privacy

Tragic mum, 37, dies after rushing into the sea to save her young son

Father shot terminally-ill only child, 11, dead then killed himself as wife made breakfast

Paint me up before you go-go: London borough to get George Michael mural

Angry Mike Tyson asks ‘you consider me a b****?’ in X-rated rant over ‘f***ing joke’ Roy Jones Jr promo video

Meghan Markle to vote in US election: Duchess speaks out in break from royal protocol

How can I cut calories from recipes without skimping on flavour?

Popular retro chocolate bar will return to supermarkets this month

Boris Johnson warns the UK is facing 'bumpy months ahead'

Emmerdale: How old is Belle Dingle actress in real life?

Sky Atlantic’s Little Birds: Who’s in the cast, what’s it about and who inspired it?

This Morning viewers in shock as Martin Lewis replacement is introduced

Cars to be banned from city centre street in major revamp