The women had formed a group known as Seven Star Group.

They had reportedly been telling two children, aged three and five, they could channel a “spirit oracle” and tell the future.

A third has also been jailed for life as part of a nationwide crackdown on superstition. 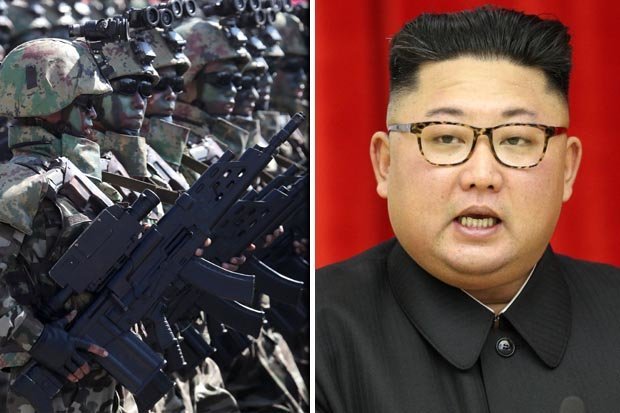 “As a matter of state policy, the authorities carry out executions, with or without trial, publicly or secretly, in response to political and other crimes that are often not among the most serious crimes”

Thousands had attended the public trial in Chongjin, a city in the north of the country.

Given leader Kim Jong-un’s Hermit dictatorship, superstition is likely to be seen as a threat to his rule.

It read: "As a matter of state policy, the authorities carry out executions, with or without trial, publicly or secretly, in response to political and other crimes that are often not among the most serious crimes.

"The policy of regularly carrying out public executions serves to instill fear in the general population."

North Korea is also known for its brutal gulags where prisoners are worked to the bone.

In recent years, a series of nuclear tests riled the western world including its arch-enemy the United States.

But although reports of nuclear ambitions remain, tensions have significantly thawed since a 2018 summit with the US.

The League One 2021/22 fixture release date for Bolton Wanderers

How to keep pets calm in thunderstorms

Flood warning after hundreds of people had to flee their homes

Scream 5 director reveals the film is completed: ‘I promise it’ll be worth the wait’

Four actions we must take to combat escalating climate impacts, according to goverment advisers

What happened next? Preston North End's promising academy quartet from 2009

Who was chef Taylor Hurt and how did she die?

Best UK cities to live in for affordability, green spaces, safety and work

Firm brought in to build multi-storey car park at hospital

Robbie Fowler has found 'perfect' striker for Liverpool to sign

University of Liverpool staff to boycott marking over job cuts

Fans notice what happened between Jota and Ronaldo in the tunnel

Covid cases popped up in US weeks before the virus was recognised by health officials, says new study

Mum's worst nightmare as boy, 4, wanders out of school and crosses 3 main roads

Mum, 24, has no teeth after losing them during horrific pregnancy sickness

Teen yob who started fire aboard train is jailed

Seven staycations in the great outdoors to explore in the UK

Who are Gary Lineker’s ex-wives Danielle Bux and Michelle Cockayne?

Work to pedestrianise Oxford Circus to begin this summer

‘It has the feel of a little local pub!’: Guardian readers on their extraordinary DIY sheds

Santa Coloma and Mons Calpe profiled ahead of Hibs clash

What did Marko Arnautovic say in celebration against North Macedonia at Euro 2020? Austria striker suspended by UEFA

Where is Jeremy Clarkson’s farm?

How to eat healthy and save the planet

How to buy the new Love Island water bottle