'Others before our own!' VDL shamed as she brags about giving away half of EU jab stock

The EU Commission president boasted Brussels' generosity on Twitter in a swipe at other countries outside the bloc who refused to export vaccines before ensuring their populations were protected. Ms von der Leyen bragged about agreeing to give away half of the 600 million vaccine doses produced in the EU to non-EU countries.

She wrote: "Out of 600 million doses produced in Europe, about 300 million have been exported to over 90 countries until now.

"If all the other vaccine producers had followed our example, the world today would be a different place."

But the tweet backfired as furious French National Rally MEPs argued the Commission chief put the rest of the world before EU citizens' health.

French MEP Jean-Lin Lacapelle said: "After the vaccine negotiation fiasco, the European Union, yet far behind in its vaccination campaign, and von der Leyen are pleased to have exported 300 of the 600 million doses produced in Europe.

"The rest always comes before our own! 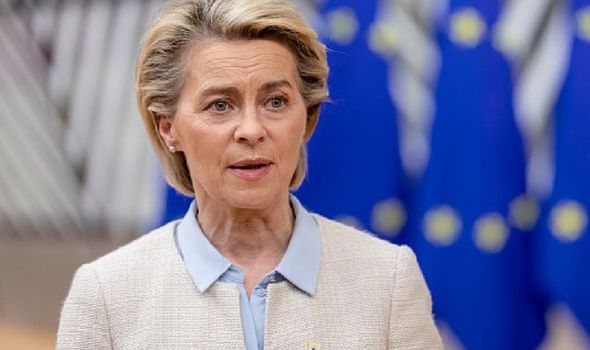 "This is their credo…"

She wrote: "The EU's globalist credo in effect: 300 of the 600 million doses produced in Europe were exported to 90 countries and @vonderleyen is pleased...

"Common sense says these doses should go primarily to Europeans, but the European Commission has no common sense!"

"Not everyone who wants to be vaccinated can. This justifies the masks and von der Leyen is delighted to see half of the doses produced exported.

"With the globalists it is always the others before our own!"

The Commission is also facing pressure from MEPs over its position on a proposed temporary lifting of intellectual property (IP) rights for COVID-19 vaccines, backing a push by many developing nations to allow more production.

EU lawmakers backed by 355 votes to 263 a resolution on accelerating the global roll-out of vaccines, the parliament announced on Thursday. 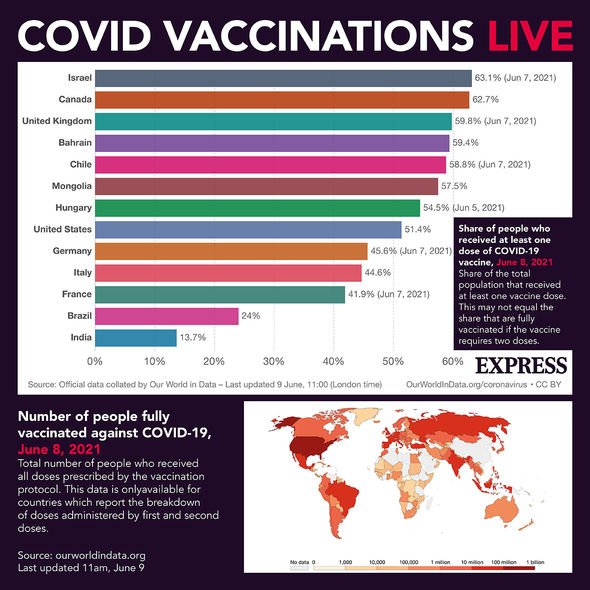 Coronavirus vaccine doses administered in the world as of June 8 (Image: EXPRESS)

The resolution says only a fraction of the 11 billion shots needed to vaccinate 70% of the world's population has been produced and that relying on pledges of excess doses from richer nations is not enough.

The text says that international trade policy needs to play a role in facilitating trade and revisiting global IP rules.

South Africa and India have been pressing for eight months at the World Trade Organization (WTO) for a temporary waiver of IP rights that could allow more manufacturers to produce shots.

Developed nations home to large pharmaceutical companies, including the European Union, have resisted, arguing a waiver would not boost production and could undermine future research and development on vaccines and therapeutics.

The non-binding resolution increases pressure on the European Commission to be constructive in WTO negotiations.

However, it is unlikely to change its view that the best and fastest way to increase production is to use the flexibility of existing IP rules, as it has proposed at the WTO.

The Commission, which oversees EU trade policy, said it was not convinced a waiver was the best option.

The resolution also puts lawmakers at odds with European Council president Charles Michel, who said a patent waiver was "not a silver bullet".

The European Parliament resolution calls for support of "proactive, constructive and text-based negotiations" for the temporary waiver.

The text will be sent to the Commission, the Council, to all EU governments and parliaments, to the head of the World Trade Organization, G20 governments and other international institutions.

The resolution also says it regrets moves by Britain and the United States to create a re-sale market to sell surplus vaccines to other industrialised countries and urges both to abolish export restrictions on vaccines and their required raw materials.

Why Scotland is a perfect replacement for Portugal – really

Who is PC Benjamin Monk?

This piper is serenading casks of whisky to ‘enhance its flavour’

Clyde make double swoop as they strengthen for season ahead

Hotels.com releases list of most lusted after hotels in the world

Ministers 'kicking can down the road' on 'appalling' rape convictions record

Date and tickets for Elton John at Sunderland's Stadium of Light

The empty and abandoned buildings of Rhondda Cynon Taf

The quarantine hotel where businessman had £1,750 'nightmare' stay

Poll: Many Democrats want more US support for Palestinians

The Dion Sanderson dilemma that Sunderland face this summer

Microsoft’s Windows 11 could still work, and look, like Windows 95

Two brothers police want to trace after series of burglaries

Coronavirus news – live: NHS ‘under huge pressure’ as patients on ventilation up 40% in a week

Who is out of Euro 2020? Every nation knocked out so far

Dalian Atkinson: Who was footballer and how did he die?

What happens if the ICC World Test Championship final between India and New Zealand ends as a draw?