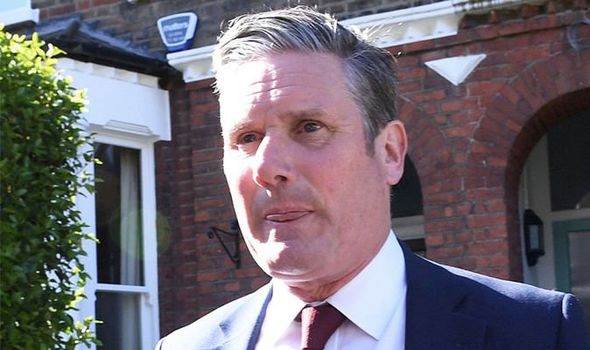 Sir Keir Starmer looked shell-shocked as he emerged from his home (Image: REUTERS)
Sign up for FREE now and never miss the top politics stories again

Sir Keir was pictured grimacing when he left his house in Camden this morning.

The Labour leader refused to answer questions from the media as he made his way to his car accompanied only by his security officer.

"Good morning," he said as he closed his front door, before refusing to engage any further.

The former lawyer has been hit with a devastating set of losses across the country at the polls.

In a historic loss, Labour lost its Commons seat in Hartlepool to the Tories in a by-election.

It is only the second time since 1982 an Opposition party has lost a seat to the Government outside of a general election.

Tight-lipped as he met the awaiting journalists and photographers outside his house, Sir Keir Starmer is understood to have travelled to the Labour Party's headquarters to assess the extent of the losses.

He is yet to make an official statement addressing the embarrassing defeat in Hartlepool.

The loss is particularly bruising because Labour's candidate in the extraordinary vote was handpicked by Sir Kier.

Dr Paul Williams was the former MP for Stockton South between 2017 and 2019.

A staunch Remainer, Dr Williams was seeking to be elected in a seat that overwhelmingly voted to leave the EU in the 2016 referendum.

Ukraine vs Austria live stream: How to watch Euro 2020 fixture online and on TV today

North Macedonia vs Netherlands live stream: How to watch Euro 2020 fixture online and on TV today

North Macedonia vs Netherlands prediction: How will Euro 2020 fixture play out today?

New flexible train tickets on sale in England from today

Horse rider and model, 23, dies in 'murder-suicide' after attempt to save her

Less a bimbo than a butch: With Klute, Jane Fonda deconstructed the Hollywood sex object

FTSE 100 falls to month’s lows as US and Asian markets decline, Sensex almost 500 points down

Lockdown rule changes on Monday, June 21 - what you can and can't do

Create 'House of Citizens' in Scotland to contrast House of Lords, SNP told

Parents' outrage at Covid 'anti-vaxxers propaganda' given to Ayrshire children

‘I am very shy. It’s amazing I became a movie star’: Leslie Caron at 90 on love, art and addiction

GB News is no joke, despite the risible start | Nesrine Malik

New EU rules would permit use of most polymers without checks, experts warn

No increase in young adults living with parents after Covid, UK study finds

Webinar: The right trees in the right places

Aimee Lou Wood on lockdown relationships: ‘It’s not normal to spend that amount of time with a human being’

North East Covid rates on day lockdown should have ended

Bookings top one million in two days for Covid-19 jabs

All 21 Everton signings made by Marcel Brands rated

There was 100% rise is catalytic converter thefts in a year

Scotland's Euro 2020 chances against Croatia debated in the Monday Jury

Catalytic converter thefts up by more than 100% in a year

Channel 4 announces series looking back at The Jeremy Kyle Show

Application for goods vehicle at site

Formula E, electric motorsport to be held in Seoul in 2022