Vehicles seized as part of police crackdown on uninsured drivers

POLICE seized five vehicles, arrested one driver and reported others for motoring offences as they launched a special operation to catch uninsured drivers.

North Yorkshire's Roads Policing Group used modern technology alongside tried-and-tested tactics to get as many uninsured motorists off the road as possible.

It was the first of a number of days to come as part of Operation Belt – North Yorkshire Police’s push to reduce the number of uninsured vehicles.

The operation on Monday proved a success for the force.

Five vehicles were seized for having no insurance, no tax or both and taken away on tow trucks to be impounded. 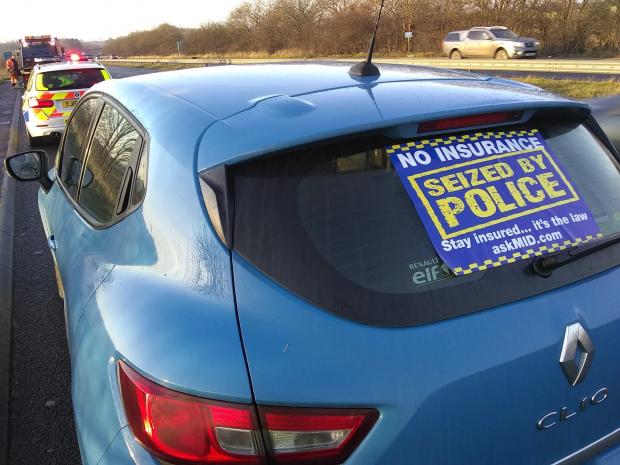 Two vehicles were prohibited for defects including having no brake lights, indicators and broken suspension.

The owners will have to get all the faults rectified before the prohibition is lifted.

One driver was arrested for disqualified driving, drug driving and possession of cannabis after he was stopped for having no insurance.

He was released under investigation pending blood results.

And several drivers were reported for various offences including no insurance, driving an overweight vehicle and number plate offences.

During the day of action in the York and Tadcaster areas, traffic officers worked closely with vehicle examiners from the Driver and Vehicle Standards Agency (DVSA).

Sergeant Mark Patterson, who led the operation, said: “By deploying our resources in a particular way, we’ve been able to identify a number of uninsured drivers in a short space of time, stop and deal with them, then confiscate the illegally-driven vehicle.

“But yesterday’s operation shows how stopping someone for being uninsured often uncovers more serious offences, such as driving under the influence or drug possession.

"This operation lets us deal with them in one fell swoop.

“We know from official statistics that motorists who don’t have insurance are disproportionately likely to cause a serious crash, so targeting them makes North Yorkshire’s roads safer for everyone.”

There are an estimated one million uninsured drivers in the UK, and in 2018 the Motor Insurance Bureau recorded 26,000 personal injury claims relating to crashes involving uninsured drivers – the equivalent to one person in the UK being injured every 20 minutes.

The Roads Policing Group will hold more dedicated days of action across North Yorkshire in the near future to catch illegal motorists.

Sgt Patterson added: “If you drive without insurance, we’re onto you.

"The tactics and technology we’re using are virtually impossible to evade.

“We will catch you, we will seize your vehicle and you could start 2020 with an extremely costly court appearance.

"It’s really not worth the risk.”

Homeless BBC TV star, 23, who turned her life around after sleeping in graveyard for seven years is found dead

Twenty new council homes to be built in Uddingston

This week's road closures around Hamilton and the surrounding areas