Tunbridge Wells: Queues for petrol clog up the roads

Chaos at the pumps continued unabated overnight, with filling stations in many parts of the country running dry. Lengthy queues were again reported outside stations that were open, with the Government confirming it is putting the Army on standby in an effort to ensure supplies were maintained.

There have been reports of cars following fuel tankers, and footage circulating on social media has shown motorists brawling at petrol stations.

Dee Featherstone, founder of Peterborough-based The Little Sensory Box described the situation as “an absolute joke”.

She said: “I am lucky enough to work from home but my son's childcare is not within walking distance and I can't work if he is home with me. 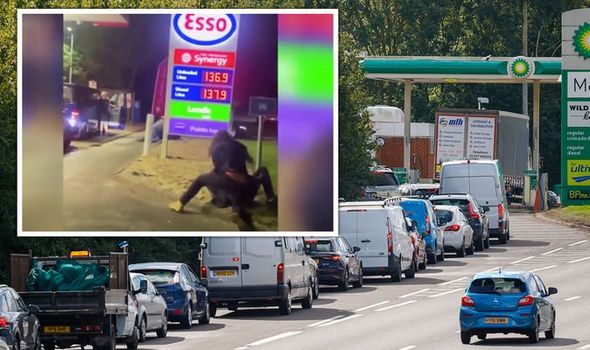 Lengthy queues have formed at petrol stations - with some drivers even brawling on forecourts (Image: GETTY) 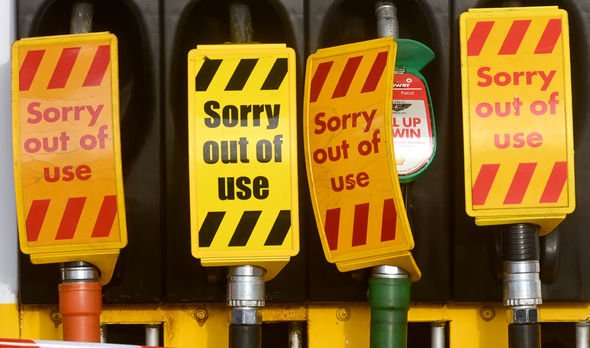 Rows of empty pumps at a petrol station in Colchester (Image: GETTY)

“Yesterday, I had to get fuel as I needed to take my son to a medical appointment. Six fuel stations later while running on fumes, we managed to find one that was open.

“My husband hasn't been able to find diesel and his job requires him to drive around the UK. The world has gone mad."

Louise Burns, director of Tyne and Wear-based Nineteen Recruitment: “As a supplier of key workers to social care settings, the unease is starting to set in.”

She had been contacted by staff explaining they did not have enough fuel to get to work. 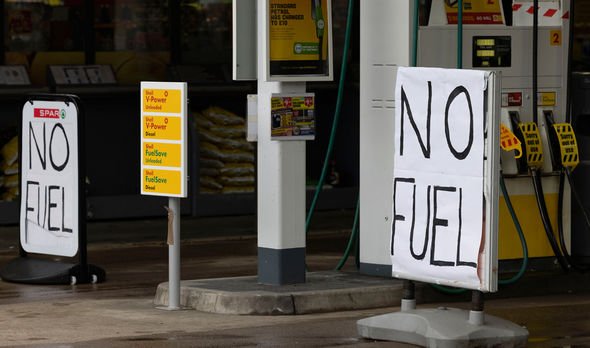 Ms Burns warned: “This leaves care settings without the critical staff they need to effectively care for vulnerable children and adults.

“Panic buyers need to stop and consider how obstructive they are being to the key workers who take care of this country.

“It’s unnecessary, it’s selfish, and it’s putting so many key services at risk."

Wendy Ward of Sheffield-based charity fund-raising specialists, Let’s Save said: "It beggars belief that people are so swayed by media coverage and don't use common sense and basic manners. 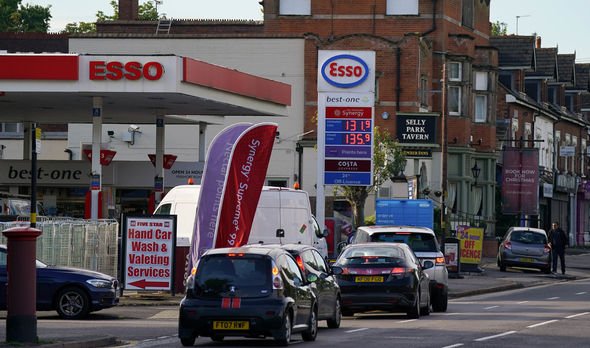 Drivers queue for fuel at an Esso petrol station in Birmingham (Image: GETTY) 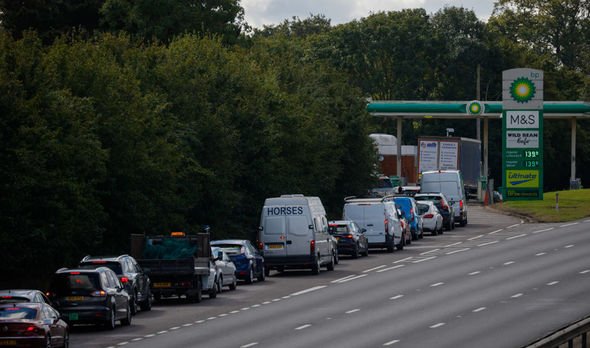 Cars queue up to use the fuel pumps at BP Plc petrol station near Guildford (Image: GETTY)

“Why on earth would you fill your car up with petrol and jerry cans unless you are doing community work, working in emergency services or are a key worker?

"How selfish to take more than your fair share."

Jez Lamb, founder of the Wirral-based craft beer marketplace, Beers @ No.42 described the panic-buyers as “Inconsiderate, selfish and greedy”.

He added: “As a business that has grown through being able to personally deliver to our local customers, I'm now faced with the challenge of not having enough fuel to get around, run my business and earn a living." 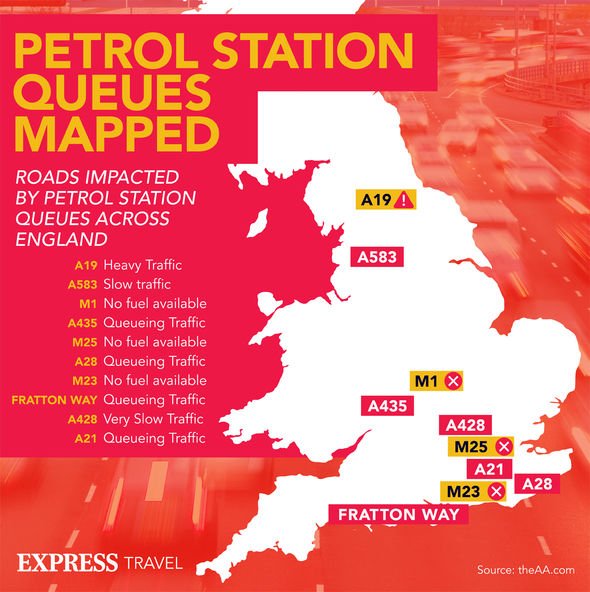 The oil companies have predicted that expect pressure on forecourts will ease in the coming days, with many cars carrying more fuel than usual.

However, Brian Madderson, chairman of the Petrol Retailers Association (PRA), said that there was little sign of that happening - while blaming social media.

"One of the reasons for this is social media. As soon as the tanker arrives at a filling station people on social media are advising that a tanker has arrived and it is like bees to a honeypot. 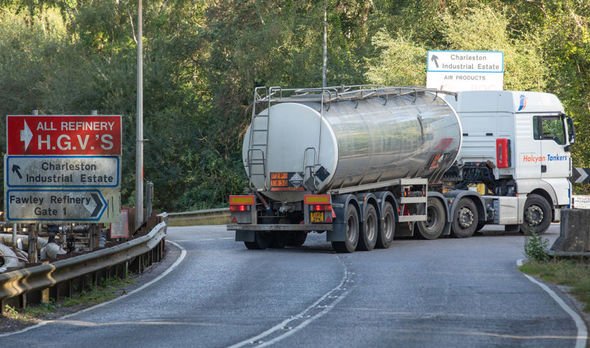 "Everyone flocks there and within a few hours it is out again."

Ministers announced last night that soldiers are being put on standby to deliver fuel, amid concerns that a shortage of tanker drivers was threatening the ability of the oil companies to maintain supplies.

He explained: "If required, the deployment of military personnel will provide the supply chain with additional capacity as a temporary measure to help ease pressures caused by spikes in localised demand for fuel.”

Simeone answered the question of what he thinks about the criticism of Atletico's style from Klopp: Nothing
Barcelona may sign Isak if Holand's transfer does not take place
Gerrard, Emery, Roberto Martinez are the favorites for the post of Newcastle coach
Now it is higher than the sky. Ronaldo, Zidane and Wenger really want Benzema to get the Golden Ball
Uli Hoeness: Vegans are militant, if you criticize them, they attack. People get sick from such food in the long run
The England national team was punished with two matches without spectators (one conditionally) for rioting during the Euro final
Neymar, Ramos and Paredes will not play with Leipzig

How to save HUNDREDS by challenging your energy provider, as some customers see their bills TRIPLE

Dancing with the Stars 2021 LIVE – Olivia Jade, Cody Rigsby, and rest of cast to see Olivia Newton-John on Grease Night

UK weather: Up to 6ins snow may fall this week as Met Office confirms white stuff ‘likely’ over half-term and Halloween

Dog owners who put their pets on a meat-free diet could face jail time and fines of up to £20,000

After We Fell review – Harry Styles-inspired romance is stupendously wooden

FIFA, Qatar team up with WHO for World Cup health promotion

Gonzaga is No. 1 in preseason AP Top 25; UCLA, Kansas next

Celtic and Leicester both forced into bizarre 3.30pm Europa League clashes on Tuesday and Wednesday

DWP rule change could mean PIP claimants are eligible for up to £15,000

British Museum to display the world's oldest map of stars

Soul Train Awards headed to Apollo for the first time

Liverpool teachers urged to 'check they are not being followed'

Caravan owners hit out after '£1,000 hike in fees with no warning'

How much money can you make on TikTok? Shocking ‘per view’ payments revealed

Over one million COVID vaccinations administered in Lanarkshire

Why now is the perfect time to make a career switch

Charles and William could both break royal protocol when they are king, says expert

'We have a Plan B!' UK fires back after EU bans Brexit Britain from £80bn project

Evil husband, 28, who stabbed wife to death and drove around with her body in the boot before dumping it jailed for life

People in Wales set out the biggest issues facing the country

David Amess: Call for politicians and democracy to be defended amid tributes to murdered MP

The nine best skipping ropes you can buy in 2021

Ex-Arsenal youth star Daniel Oyegoke on Bukayo Saka, Per Mertesacker and why he left for Brentford B