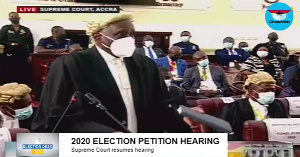 Lead counsel for John Dramani Mahama in the 2020 Presidential Election Petition, Tsatsu Tsikata has taken a swipe at the Supreme Court over the judgment it delivered on the case.

Tsikata Tsikata in an exclusive interview with TV3 maintains the apex court made errors in its decisions.

“I come to a clear determination that there were errors made in the decisions and I make no bones about saying so and respectfully explaining why I say so in the manner I think I have illustrated in this discussion, not out of disrespect for the judges or trying to make fun of them, no. It is out of the importance of their role and the importance of their fidelity to the Constitution and to the law”.

He said unlike the 2012 Election Petition judgement when all the judges gave reasons for the positions they took on the main points of the case, that was not the case in the 2020 Presidential Election Petition.

“Each of the judges had a chance to articulate the reasons and to explain their point of view from a legal authority standpoint. In this last petition, I think as we all saw virtually in all the decisions, the Chief Justice will write an opinion and everybody was on board," he said.

This, he said is a dangerous precedent.

Motorbike riders have rights of usage of road – MTTD

Confusion at EPA’s engagement with Newmont and mining communities

Covid-19: GMA calls for urgent testing amidst surge in cases

‘I am the king of Ghanaian drill music’

Rawlings left NDC due to ‘wickedness’ of party officials

Sarkodie Is Too Arrogant For My Liking, But He Used To Greet Goats When He Was Nobody

He who loses fights another day; let’s not be disappointed – Mahama

Saglemi housing project plan was to build 5,000 units at a go; no phasing – ET Mensah

Weather to be cloudy with rainfall possibility

Rawlings left NDC due to 'wickedness' of party officials - Atubiga

Women’s contribution to the film industry has been enormous

Confusion over EPA’s engagement with Newmont and mining communities

Election 2020: He who loses fights another day; let’s not be disappointed – Mahama

Would you’ve survived in Ghana if Nkrumah had governed like you? – Kwame Minkah jabs Akufo-Addo

1992 Constitution is a tool for stealing – Ernesto

Augustine Boakye has too much talent – WAFA Chief George Ofosuhene

‘List of a Lifetime’ with Kelly Hu, Shannen Doherty coming to Lifetime

6 natural tips for boosting your libido