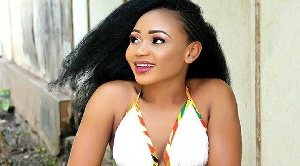 According to the private legal practitioner, the behavior of Poloo on social media needs to be examined by a psychiatrist.

Ohenewaa speaking in an interview with Daakyehene Ofosu Agyeman on Power FM Friday night indicated the behaviour of the social media sensation suggested all was not well with her, mentally.

“I can see she’s not mentally stable because of her utterances and lifestyle and as you can see no reasonable person will do what she did.” Ohenewaa argued.

Ohenewaa added that Akuapem Poloo’s lawyer should not have changed her plea from not guilty to guilty but instead should have applied for a psychiatric examination for the actress.

Rosemond Brown was jailed three months by the Accra Circut court Friday for taking a nude photo with her seven-year-old son and posted on social media.

She was sentenced to 90 days on each count but the court said, the sentence must run concurrently.

This means she will only serve a 90-day jail term which is three months.

The Court presided over by Her Honour Mrs. Christiana Cann, said such cases are becoming prevalent in society, and Institutions including the court must act.

The court said it took into consideration all the plea for mitigation before arriving at the decision.

Perhaps Messi's last match at the Camp Nou: he scored in an empty stadium, but lost his chances for the title
Wolfsburg advanced to the Champions League, Leipzig took 2nd place in the Bundesliga for the second time
Pioli on 0:0 with Cagliari: Not falling in the top 4 will be a disappointment, but it can not be called a failure
Lille is ahead of PSG by one point, Monaco-by 3 points for the round to the end of Ligue 1
Milan, Napoli and Juventus qualify for the Champions League in the round before the end of Serie A
Griezmann, ter Stegen, Langle and Pedri did not receive ratings from Marca for the game with Celta
Eibar relegated to Segunda after 7 years in the Primera, the last match of the season - with Barca

Coronavirus: Ghana begins the second phase of vaccination on May 19 – Akufo-Addo

Women are equal partners in development

Two friends before court for stealing

Achimota Preparatory School to be managed by GES - Reports

Fuel price to shoot up again from May 17

Fuel prices to shoot up again from May 17

GIBA, PRINPAG and GJA react to brutalities against journalists

Transport fares to go up by 20% from Monday

I erred in admitting evidence in favour of Opuni, Agongo - Judge admits

My son will do better than me – Stephen Appiah

Farmer who was charged for breach of trust granted bail

Here are the 4 highest human settlements in Ghana

Be bold, step up and tell your stories—FIDA Lawyer Irene to victims

Joseph Paintsil suffers relegation in the Turkish Superlig with Ankaragucu

National Security must be scrutinised like any other body – Kpebu