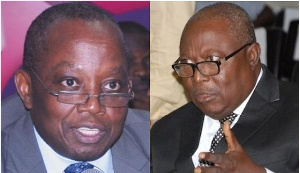 Former Special Prosecutor Martin A.B.K Amidu has given Ghanaians a different explanation and outlook to a directive from President Nana Addo Dankwa Akufo-Addo in July asking the Auditor General to proceed on his accumulated leave.

Contrary to widely held perceptions that the Auditor General was hounded out of office because of the Osafo Maafo $1m Kroll scandal, Martin Amidu has given another twist to Domelovo ‘leave crisis.’

According to him, a separate corruption scandal involving the MCE for Bawku Municipal Assembly is partially to blame for the president’s directive to the Auditor General, Daniel Yao Domelovo.

While presenting a pale explanation about the issue, the former special prosecutor challenged Akufo-Addo to tell Ghanaians why he has refused to interdict the MCE for her act but forced Domelovo to proceed on leave.

He added that despite his numerous attempts, both formal and informal, to have the president rescind his decision about the Auditor-General, he still went ahead to ask him to proceed on his accumulated leave.

In a 27-page rebuttal, Martin Amidu wrote; “Anti-corruption Moses, kindly tell Ghanaians your reason for refusing to interdict or order the Municipal Chief Executive for Bawku Municipal Assembly to vacate her office, even on voluntary or compulsory leave like you unconstitutionally did to Mr Daniel Domelevo, the constitutionally appointed Auditor General of Ghana, after my several pleas with you…”

This to him, added on to his disappointment in the president and subsequent decision to resign as the Special Prosecutor.

“My dear former anti-corruption Moses, Mr President, this is just one example to remind you Mr President that you should not have unleashed your attack dogs on my integrity as being responsible for the failure of the Special Prosecutor in the fight against corruption under your presidency,” he added.

Domelevo was compelled by a letter from the Presidency to take his accumulated 167 days leave, spanning some three years of continuous service.

Although the action has been justified by the Presidency as appropriate and grounded in the law governing Public Service Commission, the decision has been criticised by some legal experts.

Critics say the proceed-on-leave directive is inappropriate because the nature of the law that creates the Auditor General's office is similar to those that created the office of the Commission for Human Rights and Administrative Justice (CHRAJ), Commissioner and the Chief Justice, and hence must not be under the control of the Executive.

Others were sure it had something to do with the Auditor General’s consistent pursuit of the Senior Minister, Osafo Maafo.

Pioli on Zlatan's red: He apologized. This is what great champions do, which is what Ibrahimovic is
Pep Guardiola: Football is complicated. The only way I know how to be a coach is just to think about Sheffield
Conte said that Eriksen will not leave Inter: He is part of our project. Christian is a very smart guy
Tuchel wants to see Holand at Chelsea. The club will not buy Rice from West Ham after the change of coach
Eriksen pro goal for Milan: It was the perfect free kick for me. I am very happy
Conte on 2-1 with Milan: Before the winning goal, the result was unfair. Their goalkeeper is the best player of the match
Mikel Arteta: Arsenal did everything right, but they lost. Wins give confidence
Source https://www.ghanaweb.com/GhanaHomePage/NewsArchive/Amidu-provides-new-details-on-why-Domelovo-was-directed-to-proceed-on-leave-1120259

Ghanaian defender Jeremie Frimpong on the verge of leaving Celtic

SC not forum for “organised, rehearsed and choreographed theatricals”

Election Petition: Details of what transpired when petitioner failed to obey court orders

Kwabena Kwabena Is Not Ordinary He Will Soon Become A Prophet