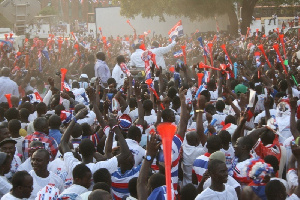 The Banda Traditional Council has cited the New Patriotic Party (NPP), its parliamentary candidate as well as the constituency chairman for Banda in the recent disturbances that led to the death of a teacher trainee graduate.

Addressing journalists in Banda Ahenkro in the Bono Region on Wednesday, the Council said the disturbances were led by Joe Danquah, the Parliamentary Candidate of the NPP.

It also cited Constituency Chairman Charles Agyei for mounting a roadblock at Banda Kabrono, where the deceased, Wulo Chambe Silas, was stabbed to death.

The traditional authorities have, therefore, charged the Inspector General of Police (IGP), the National Security and the Military High Command to as a matter of urgency “investigate the circumstances leading to the murder in cold blood of this young and promising teacher trainee at Banda Kabrono and to bring to justice the perpetrators of this dastardly act”.

The traditional rulers have also faulted the security officers, particularly the police officers, for being manipulated by Mr Danquah.

“Nananom want to state categorically that we are law-abiding citizens and if within the shortest possible time, no action is taken against the killers of Wulo Chambe Silas, at Banda Kabrono and those who came to Banda Ahenkro and inflicted wound on some of the people, and cause the arrest and prosecution of all of them, including those who were in possession of gun at a registration centre in Banda Nyire, Nananom, Chiefs, queen mothers and the people of Banda Traditional Area will advise ourselves.”

We found out how the fascinating logo of Iceland appeared: Game of thrones has nothing to do with it, the source of audacity is the success of the national team
Ronaldo-Casillas: Proud that we shared great moments
Bayern want to sell Boateng in the summer. The club has no offers yet
Solskjaer on the Europa League: a Trophy would be a big step forward for Manchester United. We want to win something
Juve have contacted Zidane, Pochettino, Inzaghi, Spalletti and Gasperini about working at the club. The Real Madrid coach refused
Coach Of Brentford: We went from a mid-level team to the third team of the season. This is an incredible achievement
Burnley are not going to sell Tarkowski for less than 50 million pounds
Source https://www.ghanaweb.com/GhanaHomePage/NewsArchive/Banda-Traditional-Council-blames-NPP-for-deadly-disturbances-1009216

I was not groomed to attack Rawlings – Omane Boamah counters Ahwoi

Our independence was the outcome of pluralistic efforts and collective wisdom – Prof. Oquaye

Poor roads: I inherited both propaganda and reality -Akufo-Addo

Sleepwalking student calls 911 after waking up at school

‘Don’t Ever Say Wrong Words To Samini, Call Him And Sort Your Differences, Few People Can Do What He Did’- Jupitar Advises Stonebwoy

Man Utd threaten to walk away from deal for Sancho

My brother’s refusal to contest Mills soured our relationship with Rawlings – Prof. Ahwoi

My govt has paid 98% of depositors of collapsed banks, microfinance companies - Akufo-Addo

Wait on the Lord – 'Kyeiwaa' shares testimony of her marriage

WATCH: This fish can't swim but can walk on its hands

Stonebwoy Replies Shatta Wale For Saying He’ll Deal With Him, Calls Him A KPUU KPAA NEGGA

‘4 more for Nana’: I know hearts are broken but respect my decision – Afia Schwar

Ebony Replacement Can Never Be Found, She’s An Icon – Bullet

Coronavirus: Response shows we are adapting to needs of the economy – BoG

I’ve not benefited from comedy, my parents still take care of me – Foster Romanus

Defy military intimidation and get registered - NDC to Ghanaians.

WATCH: US woman wakes up with a British accent, feels 'isolated'

I was in support of compiling a new register - Joyce Aryee

Register and vote for NPP – Chief of Staff

Register and vote for NPP – Chief of Staff urges

Rihanna and I are expecting a child together-Don Jazzy

An exchange between Abronye DC and Halidu ended with curses

Tesco accused of having 'sexist' trolleys

Delays as 2020 WASSCE kicks off

Kwame Dzokoto ties the knot in a simple but beautiful ceremony

I ‘discovered’ Dr Afari-Gyan at a drinking spot - Kwamena Ahwoi

#WinterOlympics: Can Team Norway eat their way through 15 000 eggs?