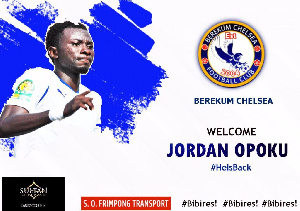 A club statement on Tuesday read: ''Jordan Opoku IS BACK! ???? The midfielder returns to #Bkcfc after a long spell with @AsanteKotoko_SC and ???? ????? on a permanent deal.

The veteran midfielder was available on a free transfer after leaving Kumasi Asante Kotoko at the end of the season.

Opoku first signed for the Berekum-based side in 2011 after returning from Albania where he played for six months.

He featured for the club in the 2012 CAF Champions League and helped them reach the Group stage.

Executives of Association of Retired Immigration Officers inducted into office

‘Killer Driver’ Reports Himself to Police

We will maintain our dominance over Hearts

Hearts need win over Kotoko to build on confidence

Intensify education on the ground

Ghana Will Never Have Peace Until KIA Is Changed – Sonnie Badu |

VIDEO: I Don’t Believe Castro Is Dead, He Will Return Soon

Airports around the world taking precautions over China virus

Democrats to focus on legality for removing Trump

How an accident got a Ghanaian-British holidaying in Ghana bedridden

Ghanaian Police Officer Vera Ayensu: “I Want To Be A Role Model For Other Ladies To Emulate”

New Register: NDC To Picket At EC Offices Across The Country – Otukonor

Kotoko CEO: We will maintain our dominance over Hearts

Sex Is For Married Heterosexual Couples Only - Church Of England

Corruption Ranking: Be Ashamed Of Yourselves – Atta Mills To Gov’t

Family Name Their New Puppy “Hulk” For Being Born Green

Elozonam Shades Kim Oprah; Advises Her To Be worried About Waking Up To Omashola’s Slogan, Warri

Princess Shyngle descends on two ladies who insulted her on instagram

I’m Making $1 Million This Year By ALL Means!

‘Lack Of Money Ruins Relationships More Than Lack Of Love’

Kourtney Kardashian ‘wishes’ she was pregnant