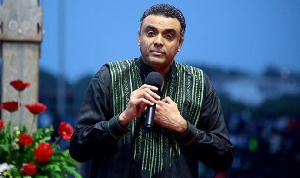 • He extolled the Ashantehene in his apology

• He claims his sermon is nearly two decades old

Bishop Dag Heward-Mills has extolled the achievements of Otumfuo Osei Tutu II in a statement that was issued to apologize for a sermon that criticized the Ashantehene.

“Indeed, the accomplishments of his Majesty Otumfuo Nana Osei Tutu II are evident and manifest for all to see.

"His Majesty Otumfuo Nana Osei Tutu II, who is also the Chancellor of KNUST and supporter of education, has helped develop the infrastructure of 788 schools; built 40 complete 6 Unit classroom blocks, and donated over 1 million desks,” Bishop Dag wrote in a statement issued to Otumfuo.

He added, “In this and ways too numerous to mention, His Majesty Otumfuo Nana Osei Tutu II has positively affected many sectors of society, reaching far beyond the borders of Ghana.”

The founder and leader of Lighthouse Chapel International explained that the sermon has been made relevant by some persons who vowed to do everything possible to close down the church’s branches in the Asante Region.

The man of God said the sermon which is nearly two decades old has been rehashed, taken out of context and maliciously shared among those against his chapel.

“I am deeply saddened that a message I shared at a conference nearly 20 years ago has been taken out of its context and circulated by persons who have previously declared that they will maliciously cause our churches in Kumasi to be closed down.

"I wish to apologize to His Majesty Otumfuo Nana Osei Tutu II for any disrespect, insult, or harm caused him or his Royal court.

Bishop Dag Heward-Mills has been in the news in recent times following a suit filed by some former pastors of his church against him, alleging the non-payment of their social security benefits after years of serving under him.

In what has been described as an “offensive sermon” on social media, the man of God who is revered by many is heard in a sermon to his congregation talking about kingship, during which he used the Asantehene as an example, and questioned his impact and legacy beyond the yearly celebrations of his reign.

The sermon has offended people with Asante roots and they have been pouring out their anger via social media, with some threatening to attack Lighthouse Chapel branches in Kumasi, the seat of the Asantehene.

But Bishop Dag Heward-Mills in his statement said:

“I deeply regret that my words spoken almost twenty years ago have offended this honourable institution, who has worked tirelessly for many years to make Ghana and the world a better place for all of us to live.”

Read below his apology.

Tottenham will offer 50 million euros to Atalanta for Romero
Gallery of new forms of top clubs: Barcelona defends women's rights with purple, Chelsea connects op-art, Manchester United returned to the 1960s
Varane will sign a contract with Manchester United next week
Jose Mourinho: I can name at least 30 favorite dishes of Italian cuisine. I like picata and ravioli with tomato sauce
Trent has become one of the highest paid Liverpool players along with van Dijk, Salah, Mane and Firmino
Trent Alexander-Arnold: Liverpool are aiming for trophies. We want to win as much as possible this season
Gabriel Martinelli: I think Arsenal is one of the best teams in the world. A lot turned out at the end of last season

Ban on Rosewood exportation is still in force - Lands Minister.

OUR DAY: Kidi Surprises Oswald As He Passes By His School To Perform

Every course is very relevant in the University

Tall List Of Gifts For ‘Our Day’ Boy Oswald From Kidi, DStv, Joy FM, Others Will Melt Your Heart

This is the gimmick of the century

“Sarkodie Will Tear Our Speakers”-Gyakie’s Reaction To “No Pressure”

Asante Bediatuo being vilified, attacked because of cheap politics

Black Sherif reacts to viral photo of him behind big botos

GES to distribute laptops to teachers

Women urged to take up roles in national space

Why can't we feel it if the economy is that good? - Ricketts-Hagan quizzes govt

Grejohn Kyei on target for Servette in Europa Conference League

When are you dropping 2% levy on imports, 5% special levy on profits before tax for banks? - Association

Volta ABCECG calls on government to speed up payments

August 4 is a statutory public holiday

Review: Sarkodie justifies the hype with a solid “No Pressure” album

Kissi Agyebeng approved by Parliament to be Special Prosecutor