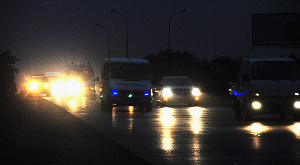 Hurray! Finally, the streetlights on the Accra -Tema motorway are being repaired! The B&FT noticed this development last week, and the few that were repaired actually made visibility on that stretch a whole lot clearer.

This will go a long way to avert accidents due to poor visibility at night on the motorway, and we commend the authorities for rising up to the task. In all fairness, the blame does not solely lie with the Roads and Highways Department but mostly on those unscrupulous individuals who pillage the poles in search of copper wires - and in the process destroy the streetlights.

Governments have on countless occasions tried to repair the streetlights only for these bandits to pillage and destroy. Thus, while the state is expending millions to install the streetlights we urge the ministry to institute some form of security detail to monitor the lights and ensure culprits are brought to book. That way, it will send a strong message so would-be vandals will be wary of destroying government property for their parochial interests.

Ordinarily, we should not be celebrating the restoration of streetlights on the motorway - but Ghanaians have long grown used to plying the Accra-Tema motorway at night without streetlights, and seeing that they are being fixed, whether it is an election year or not, requires some jubilation.

The president has announced that this year will be the year of massive road rehabilitation, and we reckon that repairing the streetlights on the motorway is in fulfillment of that promise. We also hope that it does not remain a nine-day wonder, but rather Roads and Highways Ministry will persistently see to the restoration of not only the motorway but equally all principal streets - including the Achimota-Nsawam stretch which also has all its streetlights non-functioning.

Apart from the danger it poses to motorists, this is a sad reflection of the state of the country's maintenance culture- and this must change for the better. Why is it that we are quick to destroy landmarks that we spend so much money on to institute or construct?

It is because people feel they can get away with such wanton destruction with impunity. We need to be more responsible and task people to apprehend such nation -wreckers.

District Assemblies asked to invest in Education and sanitation – Duncan

‘M3nsa Has Been A Bad Influence On Me’- Wanlov Kubolor

Speed Darlington Warns About Climate Change As He Campaigns For 2023

Fans queue for hours to buy tickets for Super Clash

The is the perfect time for Hearts to beat Kotoko

Super Clash will end in a draw

From Selling Blenders In Traffic, Reekado Banks Hawked His Way To Limelight

‘Dr. Sid And I Are No Longer Together’

Kuami Eugene Hints On Changing His Style Of

I collapsed after my first game against Hearts

Check out the photo’s of celebrities who attended Jay Z’s RocNation: The Brunch

Zlatan Shoots His Shot At Tacha(Video)

‘He’s Not After My Money’

The is the perfect time for Hearts to beat Kotoko - Polo

Super Clash will end in a draw - Frimpong Manso

Learn To Forgive But Don’t Forget

John Dumelo Calls For Re-investment In The Tourism Industry » ™

I collapsed after my first game against Hearts - Eric Bekoe

Amoako Atta elected as the presiding member for Abuakwa South

LaLiga: What Setién said about De Jong after Barcelona’s 2-0 defeat to Valencia

Delegates fund aspirant to boot him out

Genevieve To Get Political Appointment In Imo, Says Uche Maduagwu

We will mobilize Ghanaians to mount pressure on the EC

Permanent NIA offices to be up by March

We are sorry – Police to Ya-Naa

‘I Can’t Believe My Auntie, Bobrisky, Blocked Me, Help Me Beg Her’- James Brown Cries Out

Lady Narrates How She Helped Homeless Woman Deliver A Child