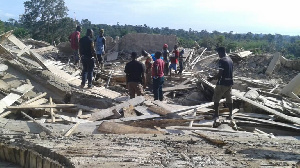 The church building has been reduced to a pile of rubble

The four-day rescue operation in the church building collapse at Akyem Batabi in the Eastern Region has ended.

Thirty victims were retrieved as of Friday, October 23,2020,3 when the operation was brought to a close. 22 of them had died, while eight survived.

The deceased are made up of 12 women, 9 men and a girl child.

The Ghana Air Force provided the sniffer dogs during the early hours of Friday to check for possible bodies covered by the debris.

The team searched thoroughly for the last victim- a woman reported missing but was not found under the rubbles hence Church leaders have been asked to inform the National Disaster Management Organisation, NADMO, whenever they smell a stench from the disaster scene.

Decommissioning the rescue team, the Director-General of the National Disaster Management Organization (NADMO), Eric Nana Agyeman Prempeh commended the rescue team made up of 210 Personnel from various security agencies, and operators of four excavators, 7 haulage tipper Truck vehicles and 2 payloaders for working tirelessly.

He charged bodies responsible for regulating the construction of buildings to intensify their monitoring regimes to enable them proactively avert the reoccurrence of such incident.

Prophet Akoa Isaac has told Police in his statement after his arrest that he was sick and lying in his residence on the same compound of the Church when he heard the collapsing of the church.

He said he was told that about 56 worshippers were in and around the building fasting and praying when the incident happened.

When Police proceeded to the scene, 35 of the worshippers were seen traumatized at the scene while a 60-year-old woman identified as Afia Tamakloe, lying dead. The rest were trapped under the rubble.

A joint rescue team made up of officials of the National Disaster Management Organization, NADMO, Ghana National Fire Service, Police, Ambulance Service, BNI, National Security, Military with support from the Eastern Regional Minister Eric Kwakye Darfuor who is at the scene retrieved 13 victims few hours after the incident out of which 6 -all females were dead, one (1) in critical condition while 6 victims namely Adu Godfred,21, Erasmus Larner,25, Elizabeth Toot,18, Bridget Birorey,59, Jonas Larner,45, and Charity Addison,38 have been treated and discharged by the Oda Government Hospital.

According to one of the survivors “We were resting in the church building after fasting and prayers so whilst resting, we heard portions of the building coming down. We were over 60 in the building so we started running away some of the people managed to escape but others were trapped “

Some residents say construction of the Church building started in 1996 hence its structural integrity continued to weaken.

Real started with Alaves: stupid hand Nacho and wild pass Courtois-again defeat
20 shells of times of the Second world war found on the basis of the Roma
Zidane Ob 1:2 with Alaves: the Start of the match is the worst for Real Madrid in the season. We lack stability
A clear penalty! Oh, my God. Ramos and Carvajal on the fall of Hazard in the match with Alaves
Ex-referee Andujar Oliver: Marcelo was pulled by the hair, it was necessary to put an 11-meter shot. There was no penalty on Hazard
Favre Pro 1:2 with Cologne: They were sitting in defence and Borussia were in too much of a hurry. There were few chances
Real Madrid conceded after a mistake by Courtois on a pass. Forward Alaves scored in an empty net
Source https://www.ghanaweb.com/GhanaHomePage/NewsArchive/Church-collapse-Rescue-Operation-ends-22-bodies-retrieved-1091947

Tears as slain Mfantseman MP is laid to rest [photos]

Peace is a national asset, let’s protect it

‘I Have Yet-To-Be-Released Songs With Samini, Stonebwoy & Kofi Kinaata’

Adepa is the winner of MTN Hitmaker Season 9

Military operation in Tigray is complete

I have confidence EC will do a good job on Dec.7 – Kweku Baako

‘Why The Younger Musicians Are Not Approaching Me’

‘I Miss Being On A Movie Set’, Says Temi Otedola

One 'Nana B' is directing insults at me - Martin Amidu

Online examinations and their security with navigation control

Journalists advised to be circumspect in projecting election results

‘I Campaigned For NPP, Switched To NDC But They Also Mafia Me’

UG political Science department had nothing to with this survey – NDC

‘Live For Yourself And No One Else’

Ghanaians no longer surprised by corruption under Akufo-Addo - Mahama

‘I Supported The NPP Before Switching to The NDC But They Showed Me Pepper’- Actor, Too Much Of Junka Town Fame » ™

Two vehicles run over policeman at Techiman, drivers on the run

Election 2020: Embrace the message of peace – Coalition of CSOs in Governance