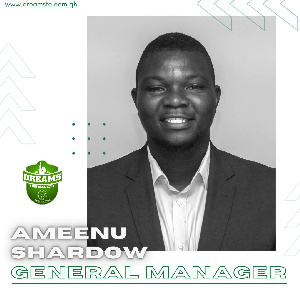 Ghana Premier League side, Dreams Football Club has named Ameenu Shadow as the club's new General Manager ahead of the start of the new season.

The decision was taken after a management meeting held by the Directors of the club on Thursday to name the former journalist as the club's new General Manager.

The football administrator has been elevated from the club's administrative manager to the top position.

This new role comes as the club announces a new management structure as part of reforms to enhance administrative success at the club.

The new role will see Ameenu Shadow oversee the day-to-day administration of the club.

Dreams FC will begin their league campaign against Inter Allies.

???? Fmr Administrative Manager @alooameenu has been elevated to a new role as the General Manager of Dreams FC.

Steve McManaman: Real Madrid are an aging team. They need new players if they want to reach their previous heights
ISCO could move to Sevilla in January. Lopetegui is personally Interested
Bilyaletdinov about the Champions League: Loco can leave the group. Unmotivated Bayern can be beaten in the 6th round
Zlatan Ibrahimovic: I Thought about retiring, but I wanted to change the mentality of Milan
Vasco da Gama sports Director: Balotelli will be like Maradona for us
Real Madrid won't buy Mbappe in the summer of 2021 due to the crisis (Le Parisien)
Ibra scores in 39, Buffon drags in 42, Ronaldo has no plans to finish. Is football really getting old?
Source https://www.ghanaweb.com/GhanaHomePage/SportsArchive/Dreams-FC-appoints-Ameenu-Shardow-as-General-Manager-1092043

I was accused of killing my husband – Queen Kamsi

Special Voting: I am impressed with the process - John Dumelo

Kyebi should be synonymous with education - Barima Kwaku Dua

Special voting process is so smooth, come out and cast your vote – IGP

Partey out with ‘significant’ injury

If Akufo-Addo comes close to Mahama in Dec 7 polls, then I’m not Sam George – MP brags

Special Voting takes off smoothly in Amansaman, other constituencies in Accra

Rihanna and ASAP Rocky confirmed to be dating

Parliament to resume on Monday, 14 December

Fair Wages and Salaries Commission announces relocation of its offices

Special Voting delays for nearly an hour in Tema West

Ozo To Start His Radio Show On Brila FM (Video)

Bawumia donates GH¢10,000 each to the building of a church, Makaranta at Gbingbani

Ambulance services readies to attend to eventualities on December 7

Over 100k to participate in special voting today

Why Akufo-Addo, NPP are scared of Corruption revelations

How I was saved from suicide – Ohemaa Mercy recounts sad story

5 Ways to Keep Your Privacy Safe When Betting Online

Santa gets green light to travel during pandemic, no self-quarantine required

Khloe Kardashian tells fans to focus on the good

NDC to absorb 100% fees of tertiary students next year

Watch the contentious penalty that cost Kotoko against FC Nouadibhuo

Wike and Biafra: The Northern Nigerians Are No Fools

Ethiopia’s Conflict: A War Won to Preserve the Nation-State