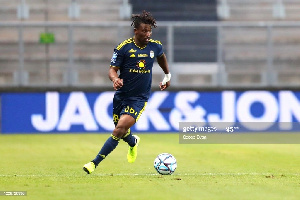 Ghanaian forward Ebenezer Assifiuah has been named in French Ligue II team of the week following his impressive performance for FC Pau over the weekend.

The attacker scored and assisted in Pau FC 4-3 home win against Valenciennes in the French Ligue II on Saturday.

Assifiuah assisted Pau FC’s third goal in the 16th minute scored by Mayron George Clayton, before going to score his side’s fourth of the game on the 50th minute.

The goal was his sixth in 34 appearances for Pau FC in the ongoing campaign.

His performance on the day didn’t go unnoticed as he was named in the team of the week.

The Schmeichels are a unique goalkeeping dynasty. But Casper has long been hampered by the greatness of his father
Laporta about the Super League: The project is alive. We will not apologize to UEFA for being the masters of our own destiny
Barcelona will sell 19-year-old winger de la Fuente to Marseille for 3.5 million euros
Wales defender Gunter: I don't know when the Euro will end for us, otherwise I would be rich
Chiesa Ob 1-0 with Wales: We proved that every Italian player can perform successfully
Denmark has an unusual coach-philosopher: he turned children's football around, looked for the principles of the national team with the former prime Minister
Football has become uninteresting. 60% of the time, players roll the ball in their own half. Honorary President of the Russian Federation Vyacheslav Koloskov shared his opinion about the entertainment of Euro 2020