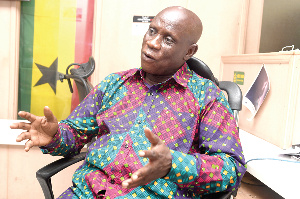 Following the former Special Prosecutor's tag of the ruling New Patriotic Party as corrupt, many have held the view that it might affect the fortunes of the party in the upcoming Presidential elections.

But, according to the Deputy General Secretary of New Patriotic Party, Lawyer Nana Obiri Boahen, they are not perturbed by the recent happenings as they are certain of winning the Presidential seat.

Mr. Obiri Boahene averred that even if Martin Amidu was the campaign manager of the opposition National Democratic Congress with the Auditor General, Daniel Yao Demelovo as his deputy, the NDC will still be rejected by Ghanaians just like the case of the 2016 general elections which saw the defeat of John Damani Mahama.

Speaking on Neat FM on Saturday, November 28, 2020, he argued that the opposition party has fabricated lies to discredit the Akufo-Addo government but notwithstanding, they are positive of a resounding victory.

“The elections come off this 7th December, NDC knows they have lost the elections in advance. They can go for Martin Amidu as their campaign manager and Domelevo as the deputy, nobody cares because you are going to lose. The NDC should give us a break,” Mr. Obiri Boahene told the host of ‘Asem Yi Di Ka’, Mac Jerry Osei Agyemang.

Ter Stegen and the Barcelona defenders have filed complaints against Griezmann for commenting on a poor defensive performance after the Super Cup (Cadena SER)
PSG can buy Barca defender Emerson for 25 million euros
Pirlo on the Super Bowl: This is not my confrontation with Gattuso, but Juventus-Napoli
Gennaro Gattuso: I gave Pirlo more slaps on the head than his father. Tomorrow football, let the strongest win
Flick about Alaba's move to Real Madrid: Hope dies last
Ødegaard has asked Real Madrid to let him go to the rent
Joan Laporta: There will be 18 teams in the Super League, they will receive 800 million euros. They will not be Interested in the national championships
Source https://www.ghanaweb.com/GhanaHomePage/politics/Election-2020-You-ll-still-lose-if-Amidu-is-your-campaign-manager-Obiri-Boahen-to-NDC-1120709

We are ready for case management despite delay tactics – Oppong Nkrumah

Pre-trial: Give us certified copies of ruling to advise ourselves – Lawyers of Mahama demand

Coronavirus: We’ve not recorded any case on campus - Private University

What is everyone watching on Showmax in Ghana?

'No excuses' for virus-hit Villa ahead of Premier League return

NDC caucus in Parliament demands copies of Handing over notes

Seth Paintsil could leave Austrian side SV Ried in January

97 persons arrested for not wearing facemask

I'm not ready to resign, your agenda to bring me down won't work — Chairman Wontumi to NPP executives

Carlos Ahenkorah Has Developed A Repugnant Hobby Of Displaying Gross Irresponsibility In His Utterances And Actions!

Election Petition: I have not targeted Jean Mensa – Tsatsu Tsikata

Post Coronavirus: Why oil prices will keep rising in 2021

I won't end my career in Ghana – Agyemang-Badu

‘This pandemic is not a joking matter’ – Former Chief Justice cautions

Side-chick of Dr Kwaku Oteng, Linda Achiaa congratulates him on international key to the city of Stonecrest award