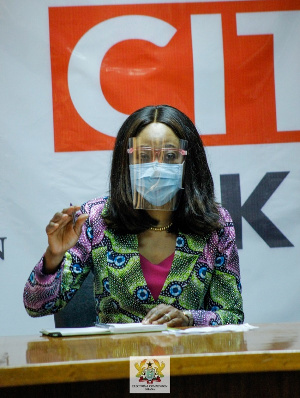 According to the commission, it will publish details of persons who registered multiple times.

Addressing the press on Thursday, the EC explained that details of multiple registrants to be made public will include the number of times the culprits attempted to register and the polling stations where the incidents were perpetrated.

Chairperson of the Commission Jean Mensa made the revelation at a press conference organized by the commission to announce the commencement of the voters’ album exhibition exercise which starts on Friday, September 18, 2020.

At the end of the new voter register compilation in August 2020, a total of 16.6 million applicants were registered, the EC said.

The Commission has also revealed that some Biometric Verification Devices will be deployed at selected polling stations across the country, to pilot the technology for the real deal; the December 7 general elections.

Hector Herrera on 0:4 with Bayern: We played very well with the best team in the world. Don't write off us
Antonio Conte: Borussia are well prepared, they have a lot of potential. Inter could have won
Guardiola on 3:1 with Porto: a Good start. In the Champions League, there are 5 substitutions, the players who came out showed themselves well
Flick about Mueller: he's a continuation of the coach's hand on the field. Thomas manages the team, drives it forward
Gian Piero Gasperini: Miranchuk has just started training. We have a lot of players, rotation is inevitable
Goretzka about 4:0 with Atletico: We were lucky that we didn't miss out at the beginning. It took 10 minutes to get involved
Klopp on the win over Ajax: it wasn't radiant football, but we scored three points
Source https://www.ghanaweb.com/GhanaHomePage/NewsArchive/Electoral-Commission-6-080-multiple-registrations-found-on-electoral-roll-1063150

All is set for Rawlings’ Mother’s final funeral

A/R: Student Robbed Of 5k A Day After Chinese Man Was Shot And Robbed Of 4k

E/R: Don’t Come And Campaign In Our Area If You Don’t Give Us Electricity, Fix Our 'Killer' Roads – Angry Kpadom Residents

3fm launches 'Save Our Breast' campaign for October

You’ve Fulfilled Most Of Your Manifesto Promises; Objective Ghanaians Can See Them — Chief Of Kajaji

Be Discerning About What You Consume — FDA

‘Lekki Tollgate Is Not Sambisa Forest’

“Shatta Wale Is Not The Interior Minister For Nigerian”

Zimbabwe slammed over plans to pay $500 toward civil servants’ funerals

Being a captain comes with challenges; stay and fight for your place - Taylor to Annan

President calls for calm in Nigeria

My second term will focus on skills training and jobs – Mahama

'Be discerning about what you consume' - FDA warns Ghanaians

Youth in Afforestation Programme has generated over 81k jobs – Gov’t

Akufo-Addo only has one term - Osofo Kyiri Abosom

Nana Aba Anamoah ‘in shock’ over son’s description of her

No.2 on ballot paper could mean second defeat