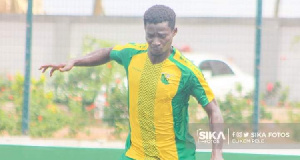 Former Asante Kotoko defender Evans Owusu has parted ways with the newly-promoted Ghana Premier League side Bibiani Goldstars after just one week of being with the club, according to Kickgh.com.

The 24-year-old joined the club on a one-year deal on the transfer deadline day but has opted to leave due to disagreement over the signing-on fee.

Owusu was one of the standout players for Liberty Professionals last season, making 18 appearances and scoring two goals in the process.

He was linked with a move to several Premier League clubs but he decided to join Bibiani Goldstars.

The highly-rated defender previously played for Asante Kotoko before moving to Liberty Professionals on a free transfer earlier this year.