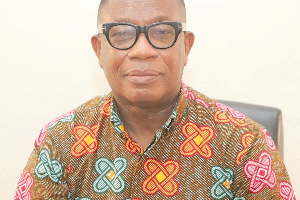 The Ghana Meteorological Agency (GMet) has said the country should expect normal rains in most areas (accompanied by strong winds) this year.

It has, therefore, urged Ghanaians to put in the necessary precautionary measures to avoid flooding and other rainfall disasters.

The Director-General of the GMet, Dr Michael Tanu, made this known yesterday at a briefing on the 2021 Season Forecast for the country.

“We are going to have a normal onset and by the first week of March (from coast to middle belt) most areas will experience rainfall.

“We also expect some parts in the north to have early onset because the rains start normally around May, but we expect that around April we should have the rains,” he said.

According to Dr Tanu, Accra would receive about 700 millimetres of rainfall per year for a normal rainfall season whereas an area such as Axim would have 2,000 millimetres. He said if those figures were exceeded then it meant that the areas were experiencing rainfall that was above average.

“The normal rains will be accompanied by normal storms with strong winds, thunder and lightning. It could be normal but heavy, however, normal is what we are talking about here,” he said.

He encouraged farmers to take advantage of this year’s rainy season by planting their crops early in order to get the desired yields, adding that “If they gauge the start of the rains and the end of the rains they can fit their crop planting within the season.”

Dr Tanu said his outfit would continue to give weather warnings and urged the public to take caution in order to avert being caught in disasters.

Meanwhile, the Deputy Director and Head of Research and Applied Meteorology at GMet, Mrs Francisca Martey, said flash floods were likely to occur in places such as Accra, Kumasi, Takoradi and other regional administrative centres during the period from April to June.

She said the phenomenon might lead to some roads becoming impassable and thus cautioned road users to be mindful when plying those roads at those times and also desist from driving through floodwaters.

“Light aircraft are advised to take utmost care and avoid flying through deep convective clouds associated with severe turbulence and lightning, especially in the afternoon hours,” she said.

She further called for increased exchanges between the agencies in charge of flood monitoring, disaster risk reduction and humanitarian aid.

Zinedine Zidane: I was lucky to coach Real Madrid. But I'm not a terrible coach, although not the best
Sweden has opened stadiums for fans, but so far only 8 (!) people can attend matches. Although in other places go to 5 thousand
Ronaldo will miss the match with Atalanta due to a muscle injury
Arsenal, Lazio and Wolverhampton are Interested in Yaremchuk. Gent wants 15-20 million euros for their top scorer
Bayern are set to extend their contract with Choupo-Moting. The striker wants to play regularly
Yaya Toure: I want to work as a coach in Barcelona. I was very much loved there
West Ham want to sign Arsenal striker Nketiah in the summer

Criticisms against the judge who sentenced Akuapem Poloo misplaced – Banson

Government must encourage Ghanaians to do mining - Charles Owusu

Akuapem Poloo’s son to get GH¢2,000 remittance each month from two generous people

CJ to set up tax court

Give us a place before you evacuate us

Fasting during Ramadan does not affect performance of footballers – Abdul Razak

How Covid-19 compares with other deadly viruses

Is home fitness the future?

Ministry of Youth and Sports announces fans return to stadium

Give us a place before you evacuate us - Traders

Workers’ interest will be protected after govt, AirtelTigo transfer of ownership

I am now ready for John Mahama, I have questions for him to answer

How can you jail Poloo and free Aisha Huang?

Time to develop a national hydrogen policy and roadmap

I am now ready for John Mahama, I have questions for him to answer - Koku Anyidoho

How can you jail Poloo and free Aisha Huang? - Kwaku Azar asks

DETAILS Of All The Charges Levelled Against Akuapem Poloo

Workers’ interest will be protected after govt, AirtelTigo sign agreement on transfer of ownership

Workers’ interest will be protected after govt, AirtelTigo transfer of ownership - Ursula Owusu

Speaker donates 200 bags of rice, 100 packs of sugar to Ghana Federation of Disabled

Volta Rail Bridge to be completed in August

“Unfollow Me If You Can’t Stand My Pregnancy Pictures”, Uche Ogbodo Warns Trolls

Over 1 million doses of COVID-19 vaccine administered in Nigeria

Time to develop a national hydrogen policy and roadmap - IES

Ministry of Youth and Sports announces fans return to the stadium

Videos pile pressure on US police over racism, killings

Access to handwashing facilities improves at basic schools in Tamale

Heads of Departments urged to be Innovative

“I will come out stronger”- Akuapem Poloo claims

Punishment would’ve been harsher had she not pleaded guilty