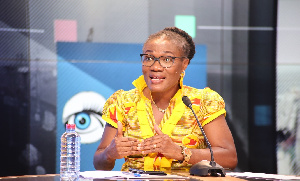 Importers and Exporters in Ghana are being encouraged to purchase marine insurance covers locally in order to get full guarantee on claims in the event cargoes suffer damages at any stage of the maritime trade.

Speaking on the Eye on Port program, Mrs. Mercy Naa Korshie Boampong, who is a member of the Technical Committee on Marine Insurance at the National Insurance Commission (NIC), emphasized that local insurance companies have the requisite capacity to insure the large chunk of cargoes coming through the maritime trade.

“We do not have issues with capacity when it comes to the financials. Technically, we have experts in that field. Traditionally, insurance companies departmentalize the various fields, and that applies to marine underwriting and claims. They have the expertise,” she asserted.

Mrs. Mercy Boampong lamented the passive attitude traders in Africa have concerning marine insurance which is regarded to be one of the oldest forms of insurance globally.

She entreated importers in Ghana to avoid ceding the insurance components to suppliers overseas because it may appear that they have guaranteed full cover on cargoes but in actual fact, it isn’t the reality.

“Even when you have bought the goods on CIF, you don’t have full cover.

Internationally, the CIF only mandates the supplier to buy the minimum marine cover which is the institute cargo clause C. It doesn’t cover volcanic eruptions, earthquake, entry of sea/lake/river water into your goods, washing overboard. It doesn’t cover total loss following the loading or offloading,” Mrs. Boampong articulated.

The Technical Committee Member on Marine Insurance at the NIC encouraged traders to commit to purchasing insurance covers from local insurers to give them peace of mind and save themselves from the legal nuances that may elude them in the maritime trade.

“Even if it is on CIF, you do not know the insurer. There are issues of language barrier and inadequacy of the cover. When you take local insurance, you are protected. It secures you. It is like disaster recovery plan. It guarantees the business continuity,” she continued.

Mrs. Boampong nonetheless praised the exporting community in Ghana for their patronage of marine insurance covers from Ghanaian insurance companies.

She also outlined many auxiliary benefit growths the local insurance industry will have on general economic development of the country, employment, growth in the banking sector which will trickle down to improve trade financing.

Meanwhile, the National Insurance Commission (NIC) has revealed that full implementation of the Marine Cargo Insurance Protocol at the Ports of Ghana will take place before the end of the year 2021.

The Cargo Insurance Protocol will make it mandatory for traders to purchase local insurance for their import and export cargo.

Some Bundesliga clubs will turn on rainbow lights in their stadiums during the Germany - Hungary match
The oldest Euro stadium is in Glasgow. The gloomy area, the uncut grass around, the insides from the 90s-and the roar of the stands in 115 decibels
City believe it will be difficult to sign Kane this summer. Citizens are ready to wait a year
Mount and Chilwell are isolated for a week and will not play against the Czech Republic. They were in contact with Gilmore who was infected with the coronavirus
PSG is ready to pay Inter for Hakimi up to 75 million euros, including bonuses. The clubs are close to an agreement
Ramos has offers from PSG, Manchester United and City. Defender would prefer to move to a Ligue 1 club rather than the Premier League
Phil Foden: Southgate is a great coach, he chooses good tactics. Critics don't even know what they're talking about

Non-performing MMDCEs in Accra will be sacked – Minister

Rawlings at 74: Famous quotes by the late J.J Rawlings

EU to lift sanctions against Burundi

Gisele Bündchen turned to yoga in the difficult times

More Covid-19 restrictions in Gauteng? Too little, too late

Today in History: Ghana has not benefited from oil find – GIGS cries

Battle to contain Tsitsikamma fire in the Eastern Cape rages on

“Sarkodie’s English is really bad, he needs to upgrade” – Why Omar Sterling featured M.anifest and not Sarkodie on his new album » ™

5 things you should never do to please a woman

Here are 5 workouts to help you build your abs

SolarWinds hackers could have been waylaid by simple countermeasure

It’s a wrap of season 1 of ‘Dankie, Lottoland’

This is how to check who really sent that marketing SMS

John Mahama has one leg in NPP

DNA machine used in GBV cases has not worked since 2019

Labour Minister storms out of interview over question on child labour

Sugar daddy gets emotional after his girlfriend dumped him

Special accreditation for Hearts of Oak vs Asante Kotoko game

Visitors to Eastern Cape cemeteries warned to be vigilant against criminals

When it comes to skin care, hand cream should be top priority

If EC Chair was indeed a Christian, she would have testified the truth

LGBTQIA+ community mourns the loss of The Raptor Room