Family drags UGMC to court over death of relative 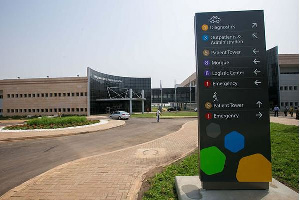 A family has filed a suit against the University of Ghana Medical Centre (UGMC) following the death of their relative.

A member of the family, Franklin Battanis Akiti, is said to have died at the hospital on June 29, 2020 – just a day after he was admitted.

The family, therefore, wants the high court to order the UGMC to produce the medical records of the deceased.

They are also seeking to stop the burial of the remains of their relative until they can verify “the cause of death.”

Citi News reports that the family said they only found out about the death on June 30 when they visited the hospital.

According to them, the corpse had also been moved to the Ga East Municipal Hospital ahead of burial without their notice.

In their writ, the family said the UGMC failed to inform them of any diagnosis prior to the death of their relative.

“..the UGMC has, since the demise of the deceased, failed to inform the deceased’s family of any diagnosis, prescriptions or recommendations prior to his death,” parts of the wrote noted.

The family maintains that an “autopsy is a requirement for the establishment of the cause of death of a person who dies within 24 hours upon arrival in a medical facility for treatment.”

They are, therefore, seeking to stop the burial of the deceased as well as get the court to order the hospital to produce the medical records of their dead relative.

Conte wants to return to Juventus. He asked the players about Sarri's future at the club
Ex - Roma coach Di Francesco took charge of Cagliari, replacing Zenga
England will remove players who intentionally cough at opponents and referees
Manchester City showed a new away form
The Icelandic national team presented their home uniforms for the 2020/21 season
In 1999, Arsenal beat Sheffield in the Cup, but Wenger offered to replay the match – because Kanu violated fair play
Milan and Napoli are Interested in Godfrey. Norwich wants 30 million euros for the defender
Source https://www.ghanaweb.com/GhanaHomePage/NewsArchive/Family-drags-UGMC-to-court-over-death-of-relative-1005187

Salisu Mohammed signs for Southampton FC in the EPL

‘Only A Foolish Old Man Will Marry A Young Lady’

Voter Registration: ‘Soldiers Have Taken Over Our Town, Some Holding Canes Intimidating Us – Chief Decries Military Presence In Banda

The Issue Of Uncovered Gutters

Today in 2016: Mahama, Akufo-Addo not right for Ghana – Nduom

This is Ghana's best registration exercise so far - EC

U.S. presidential election to be held in November as planned

GFA not in talks with Arsenal’s Nketiah over nationality switch

Postpaid, pre-paid customers of ECG to have 100% of bills absorbed – ECG

Starting a Business in a Crisis: Advice from Africa’s No.1 online accelerator and startup school

No Complacency In Covid-19 Fight

Why should a tired, old man be seeking re-election? – Stan Dogbe jabs Akufo-Addo

The Professor and I: Biography of Milton Keynes Gynecologist an Empowering Reminder of UK’s Powerful Black Population

Kweku Awotwi appointed as board chairman of UBA

Fiorentina's Duncan and Kouame end Serie A campaign with a bang

Tell us the crime of Voltarians - Asiedu Nketia roars

What future remains for Palmer if he loses case against GFA

I didn’t benefit financially from Isaac Dogbe, I built contacts in the boxing industry – John Manfo

226 Ghanaians repatriated from Qatar after being stranded over coronavirus outbreak

No Ethnic Group Was Targeted In Banda – Military

We’re encouraged by your promise – Aggrieved Menzgold customers to Mahama