The former member of parliament for Obuasi East constituency Honorable Edward Ennin has outlined his expectations of a presidential candidate for the NPP.

After making these statements, he also made it clear that the party does not have any custom they follow to elect their leaders. He made it clear that there is nothing like Danquah-Busia-Dombo tradition where flag bearers must be selected using that line. He believes that hard work and commitment to the party will cause for their victory.

“There is nothing like Danquah-Busia-Dombo tradition. I have never heard it before since 1992. It is usually given to someone who has served well in the party and not any tradition” he said 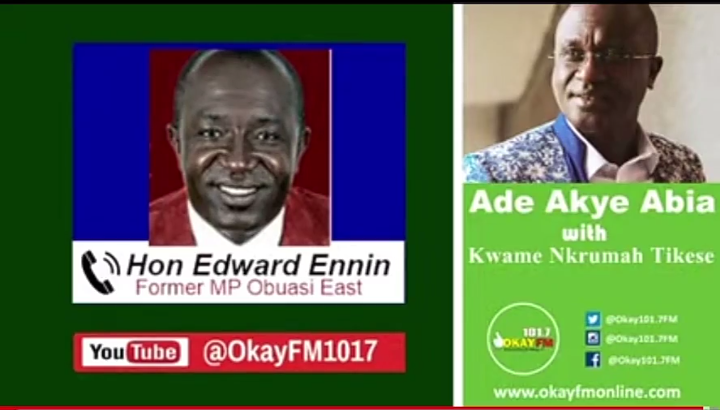 The New Patriotic Party will soon go to the polls and elect their flag bearer. Names such as Kennedy Agyapong, Dr. Mahamudu Bawumia, Afriyie Akoto and Alan Kyeremanten have popped us persons who will surely contest for such position.

However, some members in the party believe that Alan Kyeremanten is the person who must be given such position because the party has a tradition. This comment was made by Hopeson Adorye and believes that the NPP must go by that tradition and vote for Alan Kyeremanten.

In your opinion, tell us who you think will be best for the NPP.

Mzbel Shares Snippet Of Her Next Song ‘Asibolanga’ (WATCH]

The Weija floods left one person dead, and there are still some missing

Don’t Go Into Nursing Just Because You Need A Job, You Must Have The Passion For It – Asantehene Advises | Health

Brother Stands In As Groom Skips Wedding To Train |

Eat These Foods More To Boost Your Immune System

Increasing cocoa price by 21% is an insult – COCOBOD told

You Have All The Power; Why Meet Chiefs, MMDCEs Who Are Powerless – Kofi Bentil To Akufo-Addo |

My son loves my dirty songs; KiDi talks about ‘Send Me Nudes’ and parenting » ™

Only 2% of cocoa farms are affected by galamsey – Agric Minister

Private universities brainstorm on how to attain charter status

‘NPP’s galamsey fight a scam; battle has already been lost’

Women as agents of change in combating forced labour

DCE says LEAP must be made economically independent

Young people have many employment opportunities in cybersecurity space

Galamsey Fight: Posterity shall not forgive Akufo-Addo, our generation if we don’t win – Gabby

Why Is Alan Kyerematen Silent About Galamsey, Corruption And The Growing Hardships In Ghana?

Akufo-Addo must resign for failing in galamsey fight – Martin Kpebu

Having sex with condom will send you to hell – Pastor cautions

50 events endorsed for the upcoming “December in GH”

Six easy ways to get more Google reviews for your business

Online Betting Tips from MSport – How to avoid being scammed

Monetary Policy Rate increased to 24.5% amid risks from inflation

Caring for children goes beyond feeding and clothing

2022 Edition of Super Volleyball Championship to come off in December

3 Ghanaian Foods That Can Enlarge Your Male Organ Naturally.