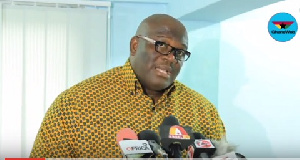 An injunction will be placed on all ongoing building projects and other structures located in waterways, Greater Accra Regional Minister, Henry Quartey.

According to the Regional Minister, this would be the only way to halt the erection of illegal structures in the region.

“Once we get that injunction, anyone who attempts to proceed with the construction of his building will be arrested for contempt and we will take an execution order and demolish it,” Mr Quartey stated.

Henry Quartey gave this indication in Accra on Wednesday when he toured the Kpeshie Lagoon enclave to appraise himself on the level of encroachment in the area.

The tour formed part of the regional minister’s ‘Let’s Make Accra Work’ initiative intended to rid the capital city of illegal structures and curb the indiscipline in the region.

The area behind the Accra International Trade Fair Centre at La has been taken over by buildings erected on filled land reducing the Kpeshie drain which originally measured more than 70 metres to about 10 metres.

This phenomenon, Henry Quartey, MP, Ayawaso Central, said was unacceptable and must be stopped to avert disasters in the future.

The assemblies, the regional minister said, were putting together a report to be accompanied by a topography of the area indicating areas that have been encroached for the legal action probably in two weeks.

Mr Quartey’s tour also took him and his team to the Central Business District of Accra where he inspected the compliance level of traders, a week after he had ordered that those doing business in the median of the streets ceased.

During the visit, the Ghanaian Times observed that chernozem, popularly known as black soil, was deposited in the median in readiness to plant trees from the Kingsway stretch through to Kantamanto.

In the company of the Chief Executives of Accra and Klottey Korle, Mr Quartey said market spaces in the CDB were being expanded to accommodate more traders.

He was also at the Accra Mall area to follow up on an earlier order for a local clothing and shoe market which had sprung up to be relocated.

Here, it was noted that the market which operates under tents and a major cause of traffic congestion at the Tetteh Quashie Interchange, had been removed paving way for free flow of traffic during the rush-hour.

Addressing the media after the inspection, Mr Quartey said he was impressed with the compliance level, announcing that an alternative market was in the offing to ensure those who plied their trade there were no left jobless.