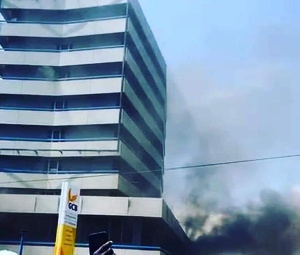 The Liberty Towers Branch of the GCB Bank

Officials of the Ghana National Fire Service have revealed that no cash has been burnt in Saturday’s fire that caught the first floor of the 6-story building at the Liberty Towers at Kantamanto in Accra.

Public Relations Officer (PRO) of the GNFS, Divisional Officer I, Mr Ellis Robinson Okoe disclosed that the first floor where the fire started from contains some stationery has been confined from spreading to other floors.

He was quick to add that about 40 fire service personnel are currently on various floors to ensure that the other floors are not gutted by the fire.

“We had a distress call that the Liberty Towers Branch of the GCB Bank had been gutted by fire. We rushed in and realized that the fire started from the first floor which contains only stationary. We have confined the fire and our men are on the ground working to ensure we douse it. There are currently 40 men in the building”, he revealed in an interview monitored by MyNewsGh.com.

Asked what the cause of fire he said “ I don’t want to speculate but the Chief Operating officer told me they did some fumigation and I am not sure that is what sparked the fire. The fire outbreak investigation is a science and we will investigate and establish the cause”, he added

Pep Guardiola: Football is complicated. The only way I know how to be a coach is just to think about Sheffield
Conte said that Eriksen will not leave Inter: He is part of our project. Christian is a very smart guy
Tuchel wants to see Holand at Chelsea. The club will not buy Rice from West Ham after the change of coach
Eriksen pro goal for Milan: It was the perfect free kick for me. I am very happy
Conte on 2-1 with Milan: Before the winning goal, the result was unfair. Their goalkeeper is the best player of the match
Mikel Arteta: Arsenal did everything right, but they lost. Wins give confidence
Nicolo Barella: We proved that we are stronger than Milan
Source https://www.ghanaweb.com/GhanaHomePage/NewsArchive/GCB-Bank-fire-affected-first-floor-which-contains-only-stationary-Ghana-National-Fire-Service-1120841

Ghanaian defender Jeremie Frimpong on the verge of leaving Celtic

SC not forum for “organised, rehearsed and choreographed theatricals”

Election Petition: Details of what transpired when petitioner failed to obey court orders

Kwabena Kwabena Is Not Ordinary He Will Soon Become A Prophet

Mzbel Addresses The Display Of Women From The Ga Traditional Council

How to cope with pandemic anxiety: 7 practical tools

Many impressions created about Rawlings are untrue – Bagbin